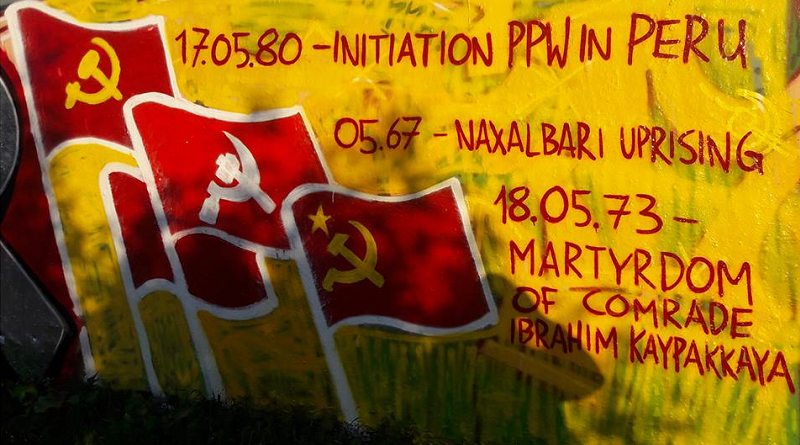 On 20 May, an international action day took place on the occasion of the 50th anniversary of the Naxalbari insurrection.

In May 1967, in the village of Naxalbari in the Indian West Bengal Valley, inspired by the Chinese communist fight under Mao Tse-Tung, an armed peasant uprising spread and intensified rapidly like a steppe firing. This insurrection is the beginning of the Maoist movement in India and the root of what is today the Communist Party of India (Maoist) and the oppressed masses of India in the new democratic revolution, in the People’s War against the old semi-colonial state. Important Communist leaders such as Charu Mazumdar emerged in this uprising and were forged and shaped in it, even in the bitter ideological and practical struggle against revisionism and betrayal.

The struggle of the Indian masses, under the leadership of their Communist Party, is now progressing always more, and has also an immense radiance far beyond India. For us as proletarian internationalists, the moral support of comrades is an absolute duty in addition to the fulfillment of our own tasks here in the country.

And many other important anniversary for our movement in this month. In addition to the beginning of the Great Proletarian Cultural Revolution, on May 16, 51 years ago – the greatest mass movement in human history – we want to especially highlight two dates:

On May 17, 1980, under the leadership of President Gonzalo, the Peruvian Communist Party initiated the People’s War in Peru to free the country from imperialism and its lackeys. With the combustion of the ballot boxes, they began the armed struggle and the ideological acuity developed in this heroic struggle is today a central component of our ideology, Marxism-Leninism-Maoism.

On May 18, 1973, after several months of imprisonment, the Communist leader of Turkey – Ibrahim Kaypakkaya – was murdered under heavy torture and thus became the immortal martyr of our movement and the international proletariat. He had founded the Communist Party of Turkey (Marxist-Leninist) and carried out armed actions. His constancy and his militant devotion to the revolution still inspire revolutionaries far beyond Turkey and Kurdistan.