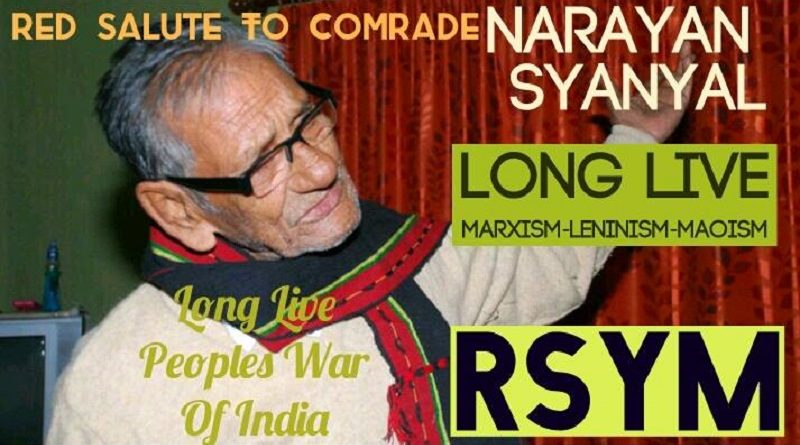 The people who wished boldly to write a new history of India, Narayan Sanyal was one of them. 70’s turbulent decade of armed peasants revolutionary movement, Nakshalbari inspired Narayan Sanyal to be associated with revolutionary politics. Narayan Sanyal understood that to be a revolutionary someone have to leave personal interests and desires. So he had resigned his bank job and went to village.
At the end of the 70’s decade, when the CPI (ML) split into various group he was in the CPI (ML) (Party Unity), farmer based party in Bihar, whose leader was he.

In the unity process between Party Unity and the CPI (ML)(PW) he was in the first row.
At least in 2004 the new emergence of the Maoist movement in India he played a vital role in CPI(Maoist) party. And elected as a politburo member of this party.

Life time communist revolutionary Narayan Sanyal was arrested in 2005 and spent nine years in prison. In 2014, when the state has realized that Narain has lost his ability to function physically, he was released in 2014. since he were in Kolkata.

He died of cancer yesterday, we lost one of the combative fighters of revolutionary struggle.

After death, he will be dynamic among us, through his lifetime revolutionary activities.
Our responsibility is to pursue/complete his unfinished work.