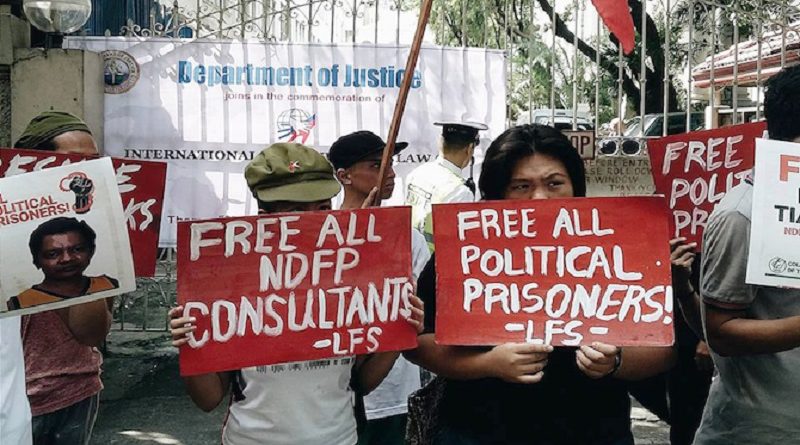 Youth group Anakbayan strongly condemns the Duterte regime for failing to fulfill its promises to free the unjustly imprisoned political detainees in time for Christmas or before the New Year.

Releasing political prisoners through a General Amnesty proclamation by the president in time for a October 26 deadline was one of the agreed upon points in the first round of the NDFP-GRP peace negotiations.

For his part, GRP Chief Peace Negotiator Silvestro Bello III made several promises to release the 50 to 70 political prisoners last Christmas and subsequently to free only 20 political detainees before the New Year.

However, none of this happened. Duterte took back this promise and declared that no political prisoners shall be freed without the signing of a bilateral ceasefire, saying they are his “final card” in the NDFP-GRP peace talks.

“By treating political prisoners as mere trump cards to compel revolutionaries to surrender, Duterte shows that he is not serious in ensuring respect of human rights and implementing socio-economic reforms to address the roots of armed conflict,” said Crisostomo.

The youth leader reiterated that political prisoners are real people and not mere cards in political machinations. He said political detainees are victims of injustice charged with trumped-up cases because of their political convictions.

Exactly 19 NDFP consultants and staff have been temporarily released on bail in August 2016. Meanwhile 21 political prisoners have been freed under Duterte through the merits of their legal defense and remedies and independent of the peace talks.