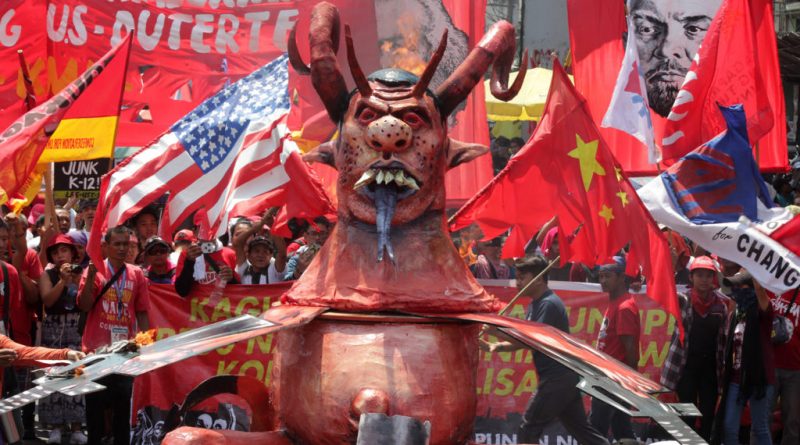 The Party extends its militant greetings to all Filipino workers and the broad toiling masses as we mark this year’s May First. On this day, the working class in the Philippines and across the world manifest their unity and militance, especially in the face of rapidly worsening conditions of oppression and exploitation.

On this day, the Communist Party of the Philippines, the political party of the Filipino working class, calls on all workers and toiling people in the country to resist fiercely and advance their interests amid intolerable socio-economic conditions as well as intensifying political repression and state terrorism perpetrated by the Duterte regime’s agents of death.

Over the past years under Duterte, the problems of the working class have grown worse by the day. More than 11 million Filipinos are unemployed or underemployed and very few jobs are being created amid the economic crisis. Duterte and his technocrats are falsely hyping the supposed lack of skilled workers to cover up the acute jobs crisis and justify the mass entry of lowly-paid workers from China to comply with secret loan agreements.

Big business is taking advantage of the oversupply of labor in the country by forcing workers to accept extremely low wages and oppressive employment schemes. Minimum wages are not enough to cover even the cost of food and other basic necessities which have risen as a result of tax impositions. The Duterte regime justifies low wages by claiming ludicrously low cost of living.

Short-term job contractualization and other forms of flexible employment schemes continue to bedevil workers. Contractual workers receive less wages, do not receive benefits and are prevented from forming unions to defend their rights. Filipino workers are extremely incensed by Duterte’s false promises to end contractualization.

In contrast to conditions of Filipino workers and toiling masses who suffer from low wages and lack of jobs, the ruling big bureaucrat capitalists and big bourgeois compradors continue to accumulate large amounts of wealth. While working-class families try their hardest to make ends meet, Duterte and his family have inexplicably amassed millions of pesos since 2016 in declared wealth. Big business operations in public utilities, as well as other large enterprises, continue to gain billions of pesos in annual profits by expliting workers.

The Duterte regime is currently the most concentrated expression of the problems of Filipino workers and toiling masses. Duterte is anti-worker and anti-poor as shown by his policy of wage depression, refusal to heed the clamor against contractualization, imposition of taxes, failure to act against rising prices of fuel and others and so on.

Political repression against workers is intensifying. There is a rising number of workers activists being killed, imprisoned on trumped up charges, surveiled and harassed. Police and military forces are being used to violently break up strikes and workers mass actions. Workers organizations are being tagged as “communist fronts” to justify the repressive measures against them. These attacks against workers are carried out alongside the vicious attacks against the peasant masses in the countryside, as well as sectors critical of the policies of the regime.

Amid worsening conditions, Filipino workers are compelled to fight in order to carry forward their struggles. They must build more, bigger and stronger unions and organizations in order to represent the interests of workers (including those of contractuals) in collective bargaining with their employers. Widespread strikes are bound to be mounted as the big capitalists zealously defend their own selfish interests.

Political education and propaganda must be conducted tirelessly and extensively among workers through their unions and other forms of organizations. Workers must be roused to be concerned not only with their own sectoral interests, but with the broader interests of the Filipino people as well. The workers movement must perform its role as the biggest component, most militant core and vanguard of the democratic mass movement.

The Filipino workers must be at the forefront of the struggle against the US-Duterte regime. They must help build the broadest possible united front against the regime’s fascism, corruption and treachery. This is the key to defeating Duterte and his plans to establish an open fascist dictatorship.

The working class movement must exercise leadership by exhibiting militance, linking-up with the different sectors, reaching out to other workplaces, campuses and communities, and by rousing millions of workers and other groups to stand up against Duterte and mount demonstrations to exercise their power.

The Party enjoins the workers to join the armed struggle in the countryside. Become Red fighters and commanders and help lead the New People’s Army in waging protracted people’s war. The NPA is mounting tactical offensives against the fascists, helping the peasant masses carry out land reform and build their mass organizations and organs political power. By having more and more workers, the NPA is further strengthened as a peasant army and as the most concentrated expression of the worker-peasant alliance.

The most militant and politically-conscious workers are enjoined to become members of the Communist Party of Philippines. The Party is guided by Marxism-Leninism-Maoism, the ideology of the proletariat. The class interests of the workers are concentrated in the Party.

The Party is carrying forward the people’s democratic revolution that seek the overthrow the neocolonial regime of big bourgeois compradors, big landlords and bureaucrat capitalists, put an end to the semicolonial and semifeudal system, establish a people’s democratic government and set the stage for the socialist revolution.