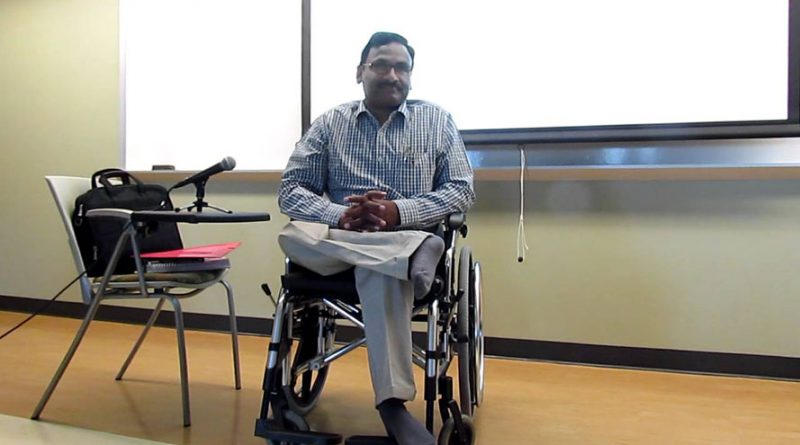 Wheelchair bound Saibaba, who was sentenced to life imprisonment in March 2017 for “waging war against the state” among other charges, has been unwell for some time and his “health is seriously deteriorating”. Saibaba is reportedly kept in solitary confinement at the Nagpur Central Jail, Maharashtra.

In a press communique this past April 30, special rapporteurs Michel Forst (on the situation of human rights defenders), Catalina Devandas (on the rights of persons with disabilities), Agnes Callamard (on extra-judicial summary or arbitrary executions) and Dainius Puras (on the right of everyone to the enjoyment of the highest attainable standard of physical and mental health and Nils Melzer (on torture and other cruel and inhuman or degrading treatment or punishment) said, “Dr. Saibaba’s health problems require immediate and sustained medical attention and are reaching a point of being life-threatening.”

This past March 25, Saibaba’s bail petition on health grounds and suspension of the sentence was rejected by the Bombay high court.

Calling him a leading voice defending the rights of religious minorities, adivasis (tribals) and Dalits, the UN experts said that he continued to be kept “in so-called anda-cells” (egg shell-cells) with no windows, extreme temperatures and inaccessible facilities. “Dr. Saibaba also lacks reasonable accommodation in detention, i.e. the necessary and appropriate modifications and adjustments to enable him to enjoy his human rights as any other prisoner.”

“India is bound by its international obligations to ensure that persons with disabilities deprived of their liberty are provided with reasonable accommodation, accessible healthcare, as well as continuous and appropriate medical treatment and rehabilitation,” the experts said in the communique.

“The denial of such conditions can be considered a form of discrimination, and may amount to torture or ill-treatment. Moreover, prolonged solitary confinement may amount to cruel, inhuman or degrading treatment or punishment and, in some circumstances, even to torture,” they said.

The rapporteurs mentioned that at the time of his arrest in 2014, he suffered an injury to his left hand, but was “not provided with appropriate medical treatment and rehabilitation. The latest reports indicate that he is in extreme pain and is no longer responding to drugs and sedatives.”

This past December 21, the rapporteurs had written to the Narendra Modi government expressing “serious concern” over his deteriorating health condition and drew it attention to Article 12 of the International Covenant on Economic, Social and Cultural Rights (ICESCR) acceded to by India on 10 April 1979.

The Article establishes the right of everyone to the enjoyment of the highest attainable standard of physical and mental health as well as relevant States’ obligations. “Inter alia, state’s must refrain from denying or limiting equal access for prisoners or detainees to preventive, curative and palliative health services (Committee on Economic, Social and Cultural Rights, General Comment 14, para.34).”

“In this connection, the ‘Mandela Rules’ further establish that the provision of healthcare for prisoners is a state responsibility and further elaborates on this. All prisoners, including persons with disabilities, shall have prompt access to medical attention in urgent cases and be transferred to specialised institutions or to civil hospitals when specialised treatment or surgery is required. Furthermore, the imposition of solitary confinement should be prohibited in the case of prisoners with mental or physical disabilities when their conditions would be exacerbated by such measures. All prisoners, and third parties appointed by them, should be granted access to their medical files (including prescribed medicines) upon request.”

The UN experts said on April 30 that they have not received any reply to the letter from the government.