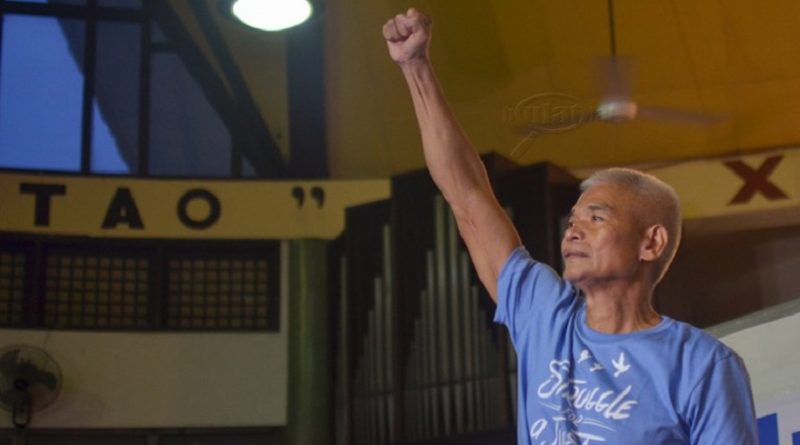 The military killed two of his brothers, who were never involved in the movement, to get him to surface.

His nom de guerre, “Ka Bart,” loved by peasants of Southern Tagalog and loathed and feared by state security forces, has a painful history.

Bart came from Bartolome, his eldest brother who was killed by elements of the 223rd Philippine Constabulary on Feb. 18, 1981.

That day, soldiers went to Bartolome’s house in Magdalena, Laguna. Not finding Tirso Alcantara there, the soldiers turned to Bartolome. To keep him from being taken, Bartolome’s wife hugged him; his two children held on to his legs. Bartolome was also carrying his youngest, then one year old, close to his chest.

Alcantara recounted in Filipino, “A soldier pointed his armalite on my brother’s forehead and pulled the trigger. His blood and his brain scattered all over his wife and children.”

“This is the part of the dirty war being waged by the military. Namemersonal sila. (They get personal)” Alcantara told Bulatlat.

From that day on, Alcantara has decided to stay away from his six other siblings and other family members. He said this was to protect his loved ones.

On May 7, 1981, soldiers came for his youngest brother Virgilio. He said the soldiers claimed that the mini-grocery managed by Virgilio in Sta. Cruz, Laguna was owned by the New People’s Army (NPA).

For security reasons, the top NPA leader in Southern Tagalog did not get the chance to say goodbye to his brothers. “Of course, it’s painful,” he said, placing his right hand on his chest.

One of his daughters was charged with murder and detained for eight years in Palawan. Alcantara said the name in the complaint was not her daughter’s but it took eight years before her daughter was acquitted of the charges.

Until his arrest on January 4, 2011, Alcantara was among the military’s “most wanted” personalities of the Communist Party of the Philippines and NPA.

Over the years, he did not have any direct contact with his family until he was released Aug. 17 from Camp Bagong Diwa detention facility.

As he walked out of jail, a 16-year-old young woman embraced him.

Alcantara did not know that her granddaughter whom he had not seen since she was four years old lives near Camp Bagong Diwa.

Her granddaughter, meanwhile, only saw Alcantara’s name written on a banner held by protesters. She told them, “Lolo ko ‘yan. Lolo ko’ yan!”(He is my grandfather.)

When they finally met, Alcantara felt again how it was to be with family. “It warms my heart,” he said, smiling.

As he is about to join the formal peace talks with the government, Alcantara vowed to fight for the interests of his bigger family, the peasants the poor and other marginalized sectors in society.