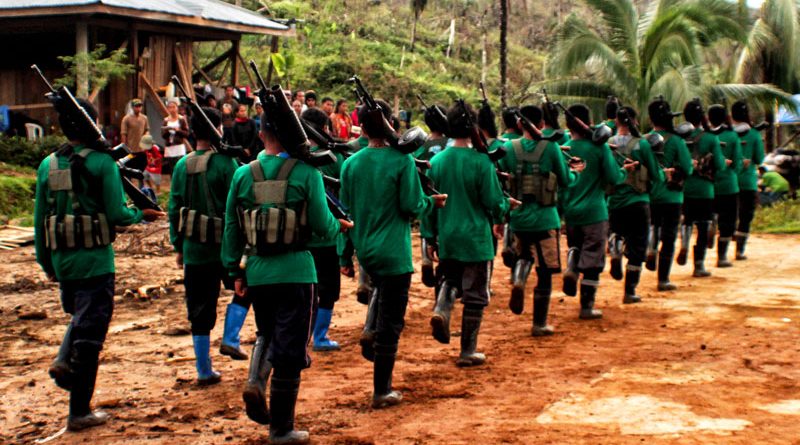 MANILA – Even as government and the National Democratic Front of the Philippines (NDFP) begin to draft an agreement on social and economic reforms, the latter already prides itself in achieving gains in addressing poverty, as it implements agrarian revolution in guerrilla zones around the country.

In the mountainous Cordillera region, agrarian revolution is not only uplifting indigenous people’s lives, but also affirms that revolutionary struggle can achieve self-determined development for national minorities at the local level.

In an interview with Bulatlat, Kennedy Bangibang, NDFP peace consultant for Cordillera and national minority affairs and a Taluktok-Kalinga, spoke of how indigenous communities increased their food supply, initiated programs on social services, and even sourced their own sustainable energy – all through revolutionary cooperation under an agrarian revolution program.

As an example, he narrated its implementation in six interior villages in one of the Cordillera provinces.

“These are the seeds of autonomy,” Bangibang said. In the same breath, he said these are being nipped in the bud by continued military attacks, from past administrations up to the present.

A political detainee since 2013, Bangibang was released on bail in August to join the GRP-NDFP peace talks. Beyond the release of political prisoners, the Duterte administration’s sincerity in resolving poverty and addressing the roots of armed conflict may just be tested now by how it will treat these revolutionary initiatives.

Agrarian revolution, the “main content of the people’s democratic revolution,” aims to liberate farmers from various forms of exploitation based on their landlessness or lack of land. It also aims to promote productive cooperation among peasants.

In the Cordillera region, large-scale mining companies have encroached on indigenous ancestral lands, with the promise of jobs and development. After more than a century, the impoverished people want no more of it, as they attest to its destructive plunder of the environment.

Bangibang said in various periods, the NPA in Cordillera helped the indigenous people defend their ancestral lands, and drove away big mining corporations. “The people staged protests, but these were not enough because the military and local government officials were on the side of the companies,” he said. The NPA staged punitive action on destructive companies.

They may have kept their lands, but indigenous peasants remain plagued with low productivity, low prices of produce, and high cost of farm production, along with high transport costs, specially for remote villages.

Bangibang said the average rice harvest from a payaw (rice terraces) can supply only three up to six months of food for a peasant household. This leaves the family hungry the rest of the year, as they look for other sources of income and food.

Peasants also plant cash crops, such as corn and sweet potato, work as farm laborers and engage in odd jobs for additional income. Still, these are not enough, specially for those who have no land to till.

Government social services for education and health are also lacking. Elementary schools are multigrade, with only one teacher managing two grade levels in a combined class. Some villages have health centers but are rarely visited by a health professional, usually a nurse or midwife.

“The revolutionary movement made a plan on how to address these needs. You cannot implement agrarian revolution if you do not first organize the people and raise their awareness about their own situation,” Bangibang said.

The Cordillera People’s Democratic Front (CPDF), along with the New People’s Army (NPA), unites indigenous peasants, women and youth into sectoral groups, empowering them to turn the wheels for change in their communities. These groups, along with the community elders and even the few professionals, become part of the political organ of power that exercises government functions and implements agrarian revolution, Bangibang said.

The revolutionary forces took off from the indigenous tradition of cooperation, or innabuyog,, and formed production teams that worked on a schedule to expand the payaws and repair the irrigation system. The teams also dug up a compost pit to make organic fertilizer to enhance soil fertility.

With the expansion of the rice terraces, the communities increased rice production, with one village producing up to nine months of rice supply.

But there is still not enough food for the whole year, Bangibang said, and so the revolutionary forces campaigned to plant the traditional corn variety to maximize the slopes planted solely to green beans. Farmers plant crops like beans to augment their income, but earn very little because of low prices.

Many doubted the plan at first, also because many do not eat corn as alternative to rice, but rather only for merienda, or snacks, Bangibang said. But when the corn harvest came, people were pleased to have more food to eat. The experience also taught farmers how to manage funds and resources, he said.

The communities nearer to the roads planted other vegetables for extra income, while interior ones produced these for consumption. In both cases, production increased food supply.

Running a mill on sustainable energy

After increasing farm productivity, the revolutionary forces turned to post-harvest development. Cordillerans store unthreshed rice as bundles, or uyyon in their granaries, which they thresh by whipping the stalks on a huge wooden pestle. They then pound the grains with a lusong (mortar) to remove the chaff. This process is labor-intensive and time-consuming, and even more so for corn.

The communities then planned to pool their resources and ask for financial assistance from the local government to purchase a rice and corn mill. But they faced one basic problem: electricity.

The villages are far from the national grid and have no electricity. But the mountains abound with resources for energy, and the revolutionary forces decided to harness micro-hydropower.

With the help of NGOs and civic-organizations, the communities built and installed a micro-hydropower system that can operate the mill, as well as supply households with 12 hours of power up to 27 watts each – just enough for lighting or to charge cellphones. Progressive scientists were tapped to train the locals on managing the micro-hydropower. The revolutionary organ drafted policies to define the project objectives, operation and management.

Bangibang’s wife, Recca Noelle Monte, an NPA leader who had a background in industrial engineering, helped in planning the project, and later, its maintenance, such as checking water levels. Monte was one of seven revolutionaries killed in a military operation in Lacub, Abra in 2014.

The rice and corn mill initially charged a milling fee of P5 (US10 cents) per can, or 18 to 20 kilos of milled rice – extremely low compared to the P30 rate in commercial mills. The cooperative later increased the fee to P10 to cover operating expenses and earn a small profit. Villagers used to spend three hours to go to the nearest rice mill in the village center. Now it is only 10 minutes away.

“The cooperative earned funds, and the people had less expenses and more time,” Bangibang said.
Some communities were able to put up a rice cooperative, selling rice for consumption at prices lower than commercial outlets. Profit mark is only at P1 to P2 per ganta, or around four kilos. These benefitted the communities, specially towards the end of the farming cycle when food and cash run out.

The revolutionary organ mobilized the villagers to initiate social services, through education and health teams. Initially, NPA members were the ones who taught reading, writing and basic science, but they later trained locals who continued the literacy and numeracy program, for adults, youth and children.

Bangibang said in most cases, women age 30 to 45 compose the education teams, as “they are creative, patient and have a natural affiliation with children.”

Even the health teams are composed mostly of women, who implement the health program: sanitation, nutrition, prevention, diagnosis and treatment of simple diseases, acupuncture and use and production of herbal medicine.

NPA paramedics initially trained health workers on basic treatment up to minor surgery. These skills are combined with traditional healing practices and that of the hilot, the indigenous midwife.

The once empty village health centers were manned by health teams, who work on regular rotation, visiting and treating the sick. They also maintain a “pharmacy” of herbal medicine, with raw materials sourced from the rich forests.

The health teams also monitored children’s weight, and implemented a feeding program, which necessitated increased production of vegetables. The team also worked with the production team to decide which crop and how much to plant based on their need for consumption.

Bangibang said all these gains became possible because of the people’s revolutionary efforts which strengthened tribal unity and consolidation, within the framework of the long and arduous struggle for self-determination and national liberation.

“The problem is, militarization is trying to destroy these gains,” Bangibang said.

The successful villages were targeted by soldiers, who put up military detachments. Leaders were then summoned and threatened to stop their activities. The rice cooperatives were branded as “NPA food suppliers,” and its members were harassed and forced to “clear their names.” They were told to surrender to the military and join the Citizen Armed Force Geographical Unit (Cafgu).

In both Oplan Bantay Laya and Oplan Bayanihan – the counterinsurgency programs of the Arroyo and Aquino regimes, respectively – indigenous peoples (IP) were targeted as part of the “IP-centric approach.” Bangibang said the military views them as a natural base of strength of revolutionaries, not only because of their mountain homes, but mainly because of their inherent collective spirit.

But even as the revolutionary influence enhanced this unity and even helped remove negative aspects such as tribal wars, the military targeted indigenous people for recruitment as soldiers or paramilitary to sow conflict and break the community, he said.

Armed struggle for right to self-determination

In its draft Comprehensive Agreement on Social and Economic Reforms (Caser), the NDFP proposes to break land monopoly through free distribution of agricultural lands. It also aims to improve the peasants’ welfare and productivity through formation of cooperatives and collective farming.

To a certain extent, these are already being implemented by revolutionary forces in various parts of the country, as cited by NDFP consultants during a Sept. 23 press conference. The consultants decried how such communities have come under attack, and people are branded as “rebels” under government counterinsurgency programs.

Many hope that things will change when the Caser is signed and actually implemented under Duterte. As of now, agrarian revolution, base-building, and armed struggle continues.

“The peace talks will not prosper if the armed struggle will not continue. Anhin mong kausapin siya kung wala siyang armas?,” he said.

The ruling class, with its political, economic and military might will not give the power to people without a fight, thus, the need for the people to level the playing field with its own army, and strong political and economic base, he said. Eventually, the indigenous peoples’ struggle for self-determination will come when national democracy and liberation dawns.