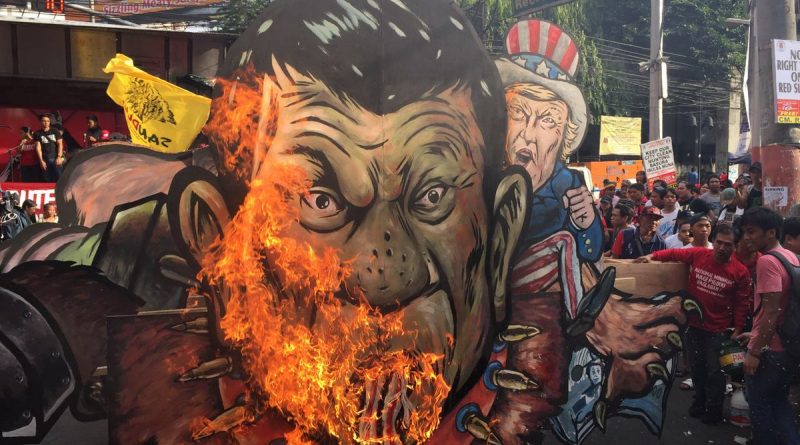 It is fine that GRP President Rodrigo R. Duterte is on record as having terminated the GRP-NDFP peace negotiations by issuing Proclamation 360 for the purpose. He and the officials of his regime and armed forces have boasted that they are hell-bent on unleashing a single-minded war of suppression to destroy the revolutionary forces of the Filipino people.

The Filipino people and their revolutionary forces are therefore fully justified to defend themselves and defeat the current Duterte regime of the U.S.-dominated big comprador-landlord state and pursue the people´s democratic revolution. The terrorist regime of Duterte is merely a passing phase in the ever worsening chronic crisis of the semicolonial and semifeudal ruling system.

Duterte, the No. 1 terrorist of the Philippines, has also issued Proclamation 374 labeling the Communist Party of the Philippines (CPP) and the New People’s Army (NPA) as terrorist organizations. His purpose is to apply the Human Security Act of 2007 (RA 9373) and the Terrorism Financing Prevention and Suppression Act of 2012 (RA 10168).

The vile purpose of the Duterte regime is to proscribe the CPP and NPA as terrorist organizations and wage a campaign to slander them, arbitrarily list down suspected officers and members for general intimidation, abduction, torture and mass murder as in Oplan Tokhang and further list individuals who are suspected of financing and aiding the CPP and NPA , who are themselves deemed as terrorists and who are thus made vulnerable to the violations of human rights and extortions by the terrorist regime.

Within the Philippines and abroad, the Duterte regime is already notorious for the use of state terrorism and for human rights violations against suspected users and pushers of illegal drugs in impoverished communities, the toiling masses of workers and peasants, the Cordillera, Lumad and Bangsamoro national minorities and the brutal occupation of communities and destruction of the entire Marawi City by bombing.

The U.S.-directed Duterte regime perpetrates gross and systematic acts of terrorism and human rights violations. It has no moral, political and legal basis for proscribing and further unleashing fascist violence against the revolutionary forces, the democratic organizations and the broad masses of the people who have the sovereign will to resist and overthrow a regime that is oppressive and tyrannical.

The Filipino people and revolutionary forces encompassed by the National Democratic Front of the Philippines (NDFP) and by the People´s Democratic Government (PDG) have the inherent status of co-belligerency in their long running civil war with the U.S.-propped big comprador-landlord state currently represented by Duterte. The CPP is the leading party of the new democratic revolution and the PDG. The NPA is the main armed force of the PDG.

The revolutionary political character of the CPP and NPA is solemnly manifested in the Program for a People’s Democratic Revolution of December 26, 1968, the Guide for Building Organs of Political Power of April 1971, the Guide for Establishing the People’s Democratic Government of October 1972, the Guidelines and Program of the National Democratic Front of the Philippines (NDFP) I of 1973 and 1977, the Declaration of Undertaking to Apply the Geneva Conventions of 1948, approved by the NDFP of July 5, 1996 and the GRP-NDFP Comprehensive Agreement on Respect for Human Rights and International Humanitarian Law (CARHRIHL).

The PDG has a constitution founded on the sovereign will of the Filipino people and on the basic alliance of the working class and peasantry. It aims to complete the people’s struggle for national liberation and democracy under the class leadership of the working class and its revolutionary party. From its modest beginnings in 1969, the PDG has grown and spread nationwide mainly in the form of local organs of political power to more than 110 guerrilla fronts covering large parts of 17 regions and 71 provinces of the Philippines.

The PDG has a comprehensive administrative structure from the village to higher levels: municipal or city, district, provincial and regional. At the basic level of the village, the local organs of political power develop from the stage of the appointive barrio organizing committees to the elective barrio revolutionary committees through various ways of consolidation, which involve the building of the revolutionary forces.

The revolutionary forces include the local branch of the Communist Party of the Philippines, the revolutionary mass organizations of various exploited classes and sectors, the people’s militia and self-defense units of mass organizations and the formation of the five basic subcommittees for public education, mass mobilization, economy, defense and health, subject to the formation of further subcommittees in order to better serve the people.

The U.S.-directed Duterte regime is daydreaming that it can discredit and destroy the sovereign revolutionary will of the Filipino people by proscribing the revolutionary forces as terrorist organizations, requiring them to submit themselves to the sham processes of the reactionary state and unleashing gross and systematic crimes of terrorism and human rights of violations. The Filipino people and the revolutionary forces are determined to fight for national and social liberation, people´s democracy, economic development, cultural progress and just peace.

The Duterte fascist regime has terminated the GRP-NDFP peace negotiations. But it cannot be too sure that it will last long because the Filipino people and even those in the GRP detest the monstrous crimes of the regime, especially mass murder, corruption and puppetry to the US. The crisis of the ruling system continues to worsen and the resources of the regime for violence and deception are limited. Thus, it is wise for the NDFP to remain open to peace negotiations with the GRP because the people and the broad united front of patriotic and progressive forces can get rid of the Duterte regime as it got rid of the Marcos and Estrada regimes.