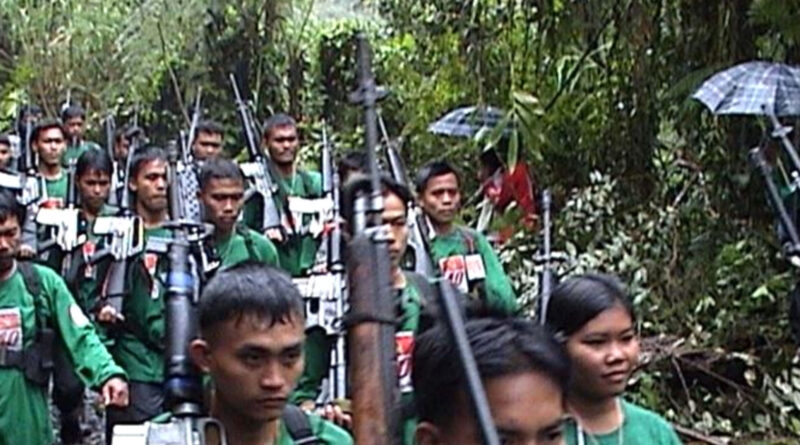 From 10:30 a.m. to 11:45 a.m. on May 28, an LDGC-NPA-Mindoro unit successfully destroyed the back-to-back vehicle of the joint butcher forces of the PNP-MIMAROPA and 203rd Brigade, Philippine Army. As a result, at least thirteen (13) soldiers and policemen were injured of which 3 were confirmed dead. Six out of ten were seriously injured.

From the information provided by the civilian victims who are already disgusted with the violence perpetrated by the PNP-MIMAROPA and 203rd Brigade, the ambush was successfully carried out on the day of the implementation of the PTF-ELCAC-Mindoro Occidental’s cultivating “Caravan Service”.

The NTF-ELCAC led by the PNP-MIMAROPA and 203rd Brigade is intimidating, harassing and harassing local officials of the reactionary government to be their tools in the violent and deceptive campaign of suppression of the CPP-NPA-NDFP and the struggling people on the island of Mindoro. Not only are the LGUs forced to pass a fake persona non grata (PNG) resolution against the CPP-NPA-NDFP, they are also forced to tamper with the funds of the LGUs to serve their program against the revolutionary movement and the people. They usually involve LGU officials in fake surrender ceremonies to give a meek face to the violence perpetrated by soldiers and police against the people.

We call on the LGUs on the island of Mindoro to fight them and not to arm the police and military in their campaign against the revolutionary movement and the people. We also call on LGU officials not to join and accompany the convoy of military and police so as not to be implicated in the military actions of the NPA.

The ambush was the LDGC’s response to the respective complaints filed by Mindoreños against the forces of the PNP-MIMAROPA and 203rd Brigade. They feature the following:

First, the indiscriminate bombing of communities and farms by farmers, indigenous people and citizens.

On March 25 to 26, the 203rd Brigade bombed at the command of their leader Col. Augusto Villareal and General Antonio Parlade Jr. the communities and farms of indigenous peoples and farmers on the border of Mansalay and Roxas, Oriental Mindoro province. They detonated 11 howitzer bullets. As a result, thousands of residents in more than 15 sitios of the two towns, especially those living in Brgy. Panaytayan and San Vicente. An estimated more than 15,000 populations of the two barangays were affected.

Earlier, on March 7, the 203rd Brigade’s howitzer shelling twice targeted the community in the Cayacyan River of Brgy. Monte Claro, San Jose, Occidental Mindoro province. The lying spokesperson of the 203rd Brigade, Corporal Lerma “Liway” Bulaklak, justified that the bombing was just a test of their weapons.

Second, hundreds of cases of illegal arrest of citizens including farmers and indigenous people to be subjected to interrogation and forced surrender as members of the NPA. The victims repeatedly suffered mental and physical torture. They are ordinary citizens who are victims of red-tagging by General Parlade’s fascist forces. After surrendering, most of the victims will be given only a few kilos of rice, canned food and noodles contrary to what the media boasts of giving those who surrendered P15,000 to P65,000 each. Victims of fake surrender have already lost peace of mind due to repeated camp summonses, threatening their lives even if they agreed to surrender.

And the arrest, imprisonment and abduction of prominent peasant leaders and innocent civilians, even children. On February 23, around 3:30 pm, joint forces of the 203rd Brigade and PNP-Mimaropa arrested Mrs. Genalyn “Neneng” Avelino. Ate Neneng is known as a legitimate peasant leader in Mindoro. On March 25, two Mangyan Hanunuo, Kadlos and Jeremy “Eming” Lukmay, were abducted in sitio Kilapnit, Brgy. Panaytayan, Mansalay, Oriental Mindoro province. Until now, Ate Neneng is still incarcerated. Just on May 12, 203rd Brigade forces violently abducted 4-year-old MJ in sitio Ambuyan, Brgy. Pitogo, Rizal, Occidental Mindoro province at the home of the Fernandez family who served as its legal guardians. Young MJ was abducted to harass and subdue his parents.

The LDGC-NPA-Mindoro will continue to play its great duty to defend the national-democratic interests of the Filipino people. The people and the Mindoreños can hope that the NPA will do its utmost regardless of its cost to bring justice to the millions of victims of the killings, violence and torture of the tyrannical Duterte regime.

It is exposed to the Filipino people and the Mindoreños that the tyrannical Duterte regime is the number one terrorist and oppressor in the country. The Filipino people are angry that this regime is only brave with the poor people and unopposed civilians while its tail is trembling with fear in front of its fellow Chinese oppressors and bending its knees to its US imperialist boss. The people will never allow the regime to surrender the sovereignty and territory of the West Philippine Sea country to China as well as the auctioning of the Philippine patrimony to foreign powers.

We call on the people to support the just armed struggle waged by the NPA. We call on all those who are 18 years old, in good health, capable of holding a weapon and fighting to join and join the NPA. Only with the strength of the NPA, the true Army of the Filipino people and with the unity and support of the masses in the people’s army, will the invincible forces be built to achieve national independence, democracy, social justice and prosperity.