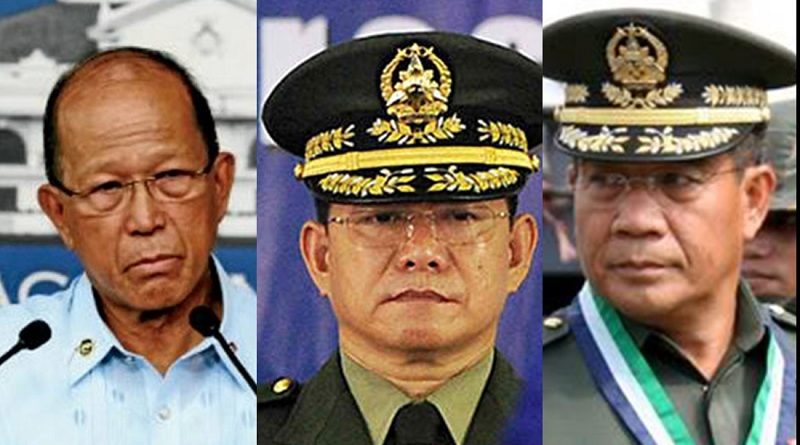 Communist Party of the Philippines
4 April 2017

The Communist Party of the Philippines (CPP) congratulates the NDFP and GRP Negotiating Panels for successfully pushing through with the opening of the fourth round of peace negotiations yesterday despite the peace-spoiling by stooges of US imperialism in the military establishment. To support the talks, the Party calls on the Filipino people to reject these US stooges and resist their efforts to spoil the NDFP–GRP peace negotiations.

These US stooges, mainly Defense Sec. Delfin Lorenzana, National Security Adviser Hermogenes Esperon and Gen. Eduardo Año, are acting in behalf of US imperialism, in seeking to derail the NDFP–GRP peace negotiations with the long-term aim of keeping the country in a perpetual state of economic backwardness, people’s unrest and civil war.

On April 1, just before the 4th round of peace negotiations could start, Lorenzana issued vitriolic statements and foisted demands contradictory to the spirit of the March 11 GRP–NDFP Joint Statement. Lorenzana and his ilk in the AFP insisted that the fourth round of peace talks be devoted to forge a bilateral ceasefire, in the hope of preempting negotiations on the more pressing questions of socio-economic reforms.

Echoing the line of the US stooges, GRP President Duterte put forward more conditions prior to the fourth round of talks, thus pushing it to the brink. The fourth round of talks proceeded yesterday only because of the openness of the NDFP Negotiating Panel to discuss the possibility of a joint unilateral ceasefire and the flexibility of both sides in setting the agenda of the talks.

Lorenzana and his fellow US stooges are trying to prevent peace negotiations from moving forward in efforts to discuss and resolve the substantive socio-economic issues, especially the most crucial issues of genuine land reform and national industrialization. They also want to prevent negotiations on political and constitutional reforms where the question of national sovereignty will be a critical matter.

The three fascist stooges serve US big arms and weapons industry, its big capitalist trade and investment interests in the Philippines and its local partners among big business (the Zobels and Ayalas) and the big landlords (including the Aquino-Cojuangcos).

They are bent on keeping the Philippines as an exclusive dominion of US imperialism, preventing it from exercising an independent foreign policy to engage in economic, diplomatic and military relations with other countries. They serve the aim of the US imperialists to secure its hegemony in the country in the face of rising challenges in the context of a multipolar world.

Lorenzana insists on the worn-out US terrorist tagging against the CPP and NPA to misrepresent the revolutionary forces, draw attention away from the fundamental socio-economic issues and put to question the very basis of peace negotiations between the NDFP and the GRP

This goes against the January unilateral move of the GRP Negotiating Panel which formally asked the US to remove NDFP Chief Political Consultant Prof. Jose Ma. Sison from its terrorist listing. Indeed, the conduct of the peace negotiations itself, facilitated by the Royal Norwegian Government, is the most glaring negation of Lorenzana’s terrorist tagging of the revolutionary forces.

Lorenzana’s terror tagging the CPP and NPA is also a vain attempt to cover up the rapidly piling cases of terrorist war crimes of the AFP in the conduct of aerial bombardments, shellings and killings of peasant activists over the past few weeks.

Lorenzana et al are more interested in waging an all-out war against the Filipino people in order to suppress their struggle to end US imperialism and attain national liberation. By having the AFP wage all-out war, the US military industry is assured that the country will continue to purchase helicopters and jet fighters from the US and US-affiliated corporations to drop US-made bombs and carry out armed suppression against peasant communities and the ancestral land of minority people. This is the same case across the globe today, where the US government has instigated or carried out bombings and wars such as in Syria, Libya, Afghanistan, Nigeria and elsewhere.

In just the past few days, the AFP has been on an aerial bombardment campaign in Mindoro, Agusan del Norte and Davao Oriental. Aerial bombing runs have also been conducted in Abra, Agusan del Sur, Sarangani, Davao and other provinces. Just recently, armed AFP troops have occupied Barangay Baglay in Lagonglong, Misamis Oriental, as well as other villages in Abra, Marilog, Sultan Kudarat, Mindoro.

General Año must be made to answer for the successive killings by his men of civilians Renel Mirabeles of Bagong Silang, Sipocot, Camarines Sur (March 30), Jeffrey Santos of Barangay Tagbinonga, Mati, Davao Oriental (March 30) and Danilo Nadal of Barangay Tibagun, Pantukan, Compostela Valley (April 2). Since February, close to 50 peasants and members of the national minority, mostly residents of areas which the state security forces suspect to be part of the NPA mass base, have been killed by operating troops of the AFP.

In waging aerial bombardments and a campaign of armed suppression against the poeple, they are, however, succeeding only in convincing thousands of people to support and join the New People’s Army.

Reject militarist framework of US stooges

The CPP calls on the Filipino people to urge the Duterte regime to reject the war-freak mindset of the three US stooges and push the peace negotiations to tackle the substantive issues of socio-economic reforms and not derail the process by insisting on a premature bilateral ceasefire without prior agreements on substantive socio-economic and political reforms.

For peace talks to continue moving forward, GRP President Duterte must reject the insistence of the militarists to prematurely push a bilateral ceasefire agreement even before agreements on substantive issues are forged. Discussions on the more crucial socio-economic issues, which the GRP panel also consider as the meat of the negotiations, should not be preempted.

The CPP and all revolutionary forces calls for acceleration of negotiations to forge an agreement on comprehensive socio-economic reforms which are at the root of the armed conflict. A bilateral ceasefire can be discussed as a consequence of the CASER and CAPCR.