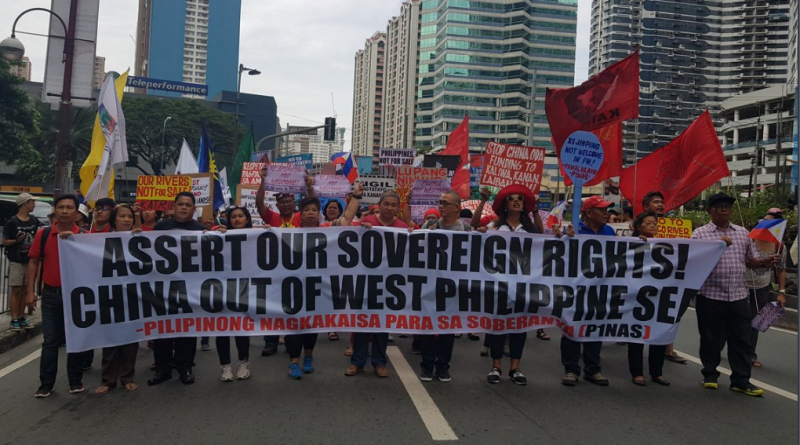 The November 20-21 visit of China President Xi Jinping form part of the overall effort of China to impose its dominance in the Philippines. Like the US imperialists, China conceals its imperialist aims with such ideals as “enhancing dialogue” and “all-round cooperation.” In fact, China is pushing its imperialist weight and imposing its power on the country.

As an imperialist power, China considers the Philippines as strategically important under its geo-political design and overall economic aims. China aims to weaken US hegemonic control of the Philippines amid rising inter-imperialist trade wars, saber-rattling and preparations for war.

China seeks to overwhelm the Philippine economy with its excess capital, make it dependent on Chinese loans and grants, impose neoliberal economic policies, plunder and exploit the country’s labor and natural resources, control the key aspects of the economy, and lock the Philippines in a perennial state of exporting cheap and low value-added raw and semi-processed goods and importing capital goods and consumer commodities.

Having been at the center of the imperialist global value chain, China has long become the top destination of Philippine exports of raw materials and semi-manufactures and has become the primary source of the country’s imports.

Over the past two years, China has moved more quickly to further strengthen its economic presence in the country. Its official development assistance has shot up to $63.5 million last year from $1.5 million in 2016. Foreign direct investments from China grew at a faster rate reaching $1.043 billion in the first two years under Duterte, close to 85% of its total FDI over six years under the previous Aquino regime ($1.231 billion) and more than that ($825 million) under Arroyo’s nine-year reign.

China seeks to accelerate its economic domination of the Philippines by investing in large infrastructure projects in order to mobilize its idle capital and provide a market for its surplus steel and cement. It has enticed Duterte with promises to spend $15 billion in dams, roads, bridges, sea ports and railway projects and provide loans of up to $9 billion in the next few years.

These promises of fund infusion, however, remain largely unfulfilled. But bureaucrat capitalists are drooling over the potential kickbacks to be pocketed in the form of so-called “discoverer’s fees”. The big bourgeois compradors and Duterte dummy capitalists eagerly await the partnership with Chinese corporations to make large profits in state-guaranteed projects.

China’s military bases in the Spratlys

China’s pledge of economic investments were made after Duterte submitted to China’s claims of sovereignty over the Spratly islands and other formations in the South China Sea which are within the Philippine’s exclusive economic zone and extended continental shelf. Duterte threw out the ruling of the International Tribunal on the Law of the Seas which recognized Philippine sovereignty over these islands and did not let out any whimper of protest amid China’s frenzied land reclamation which destroyed the rich eco-system to pave the way for the construction of military bases in the area.

Xi Jinping’s statement to make the South China Sea a “sea of peace, friendship and cooperation” is utterly hypocritical after having already trampled on Philippine territorial sovereignty and planted its boots on Philippine soil. China now operates a 10,000-foot runway, docks, radar stations and other facilities in the Spratlys to serve as forward base for its growing fleet of naval and air forces and as a military outpost against US military presence and threats to encircle the China mainland.

In exchange for a few billion dollars of promised aid and loans, Duterte is set on selling-out vast Philippine resources in the South China Sea through the planned “joint exploration” of the Recto Bank and other areas which will give China access to what it estimates to be a $60 trillion worth of oil reserves, gas, rare earth and other minerals.

The contract for this is being kept under wraps fearing legal counter-action by oppositors as the 1987 constitution provides that such undertakings is within the exclusive right of the State. Duterte insists that “cooperation” with China will lead to “co-ownership.” For its part, China has declared that any such undertaking in the South China Sea should be presupposed on recognition of Chinese sovereignty over these areas.

This planned “joint exploration” is similar to the anomalous and unequal 2005 Joint Marine Seismic Undertaking (JMSU) agreement between the PNOC, the China National Offshore Oil Company and the Vietnam Oil and Gas Corp. which covered more than 140,000 square kilometers in the Recto Bank and South China Sea. The Arroyo regime signed the JMSU in exchange for Chinese funding for the Northrail project, the NBN-ZTE Broadband deal and other promised loans and investments. The JSMU was completed in 2007 but the findings are being kept by China.

Recently, after going through a sham of a bidding process, the Duterte government has granted contracts for the operation of a telecommunication company to the state-owned China Telco in partnership with Duterte front-man Dennis Uy. This would give China control of a crucial economic infrastructure. This will be in addition to China’s control of a key component of the Philippine power industry through co-ownership of the National Grid Corporation by the State Grid Corporation of China.

Duterte’s relationship towards China is being described as “friendly.” This is a completely false description. “Friendship” denotes equality and mutuality. Duterte does not behave, nor is treated as an equal. He is being excessively servile, playing the vassal to the Chinese overlord. It is with utter submission and kowtowing that he declared to China ahead of Xi Jinping’s visit that: “So you’re there, you’re in possession, you occupied it. Then tell us what route shall we take and what kind of behavior.”

China as an imperialist power

China has risen as an imperialist power with the state monopoly bourgeoisie and finance capitalists at the helm, exporting capital, aligning other imperialist powers against the US, spending more on building its military machine, deploying troops in the South China Sea, east Africa and elsewhere to secure its trade routes and carve out its own spheres of influence and fields of investment.

Economically, China is the biggest imperialist rival of the US. Militarily, China still lags behind the US in terms of spending, nuclear arsenal, arms production, deployment of air craft carriers and overseas troops and other parameters. Its alliance with Russia and India in the Shanghai Cooperation Organization, however, poses a formidable military challenge.

China’s strategy is to make use of its economic dominance to pave the way for military and political dominance in order to push the balance of power in the Pacific to its favor. It is vigorously pushing for multilateral economic and trade agreements such as the Regional Comprehensive Economic Cooperation to further liberalize the backward economies and allow it to become the undisputed economic power in the Asia-Pacific. Under the Belt and Road Initiative, it is constructing a vast network of roads, bridges and ports to build a trade route to Europe and Africa, using the Asian Infrastructure Investment Bank to flood the backward countries with loans and investments. China has already seized control of key assets of some countries which failed to pay their loans.

By applying the same method of economic colonialism on the Philippines, China will merely perpetuate the backward, agrarian and non-industrial economy of the Philippines which has long been dominated by the US and Japan monopoly-capitalists. Philippine addiction to China loans will make it a debt slave of China, in addition to being dependent on loans and grants from IMF-WB, the ADB, the Japan ExIm Bank and other creditors.

Until now, the Philippines remains a semicolony and military stronghold of the US imperialists, with which China is now locked in an intensifying trade war and challenging US economic, political and military domination.

Although fast catching-up, China still trails behind the US and Japan in terms of investments and loans to the Philippines. In the field of portfolio investments or infusion into the Philippine stock market and other financial instruments, the US remains the top source of capital with 43% share compared to China’s share of 6%.

Economic policies, such as the imposition of the TRAIN law, continue to be influenced primarily by the IMF, US-controlled credit rating agencies and such groups as the Partnership for Growth.

By selling-out to China while being subservient to the US, the Duterte regime is committing a double-sided betrayal of Philippine national sovereignty. On the one hand, Duterte has kept silent while China built military bases and is selling-out Philippine; on the other hand, he has allowed the Philippines to be used as a US springboard for building up their military presence in the South China Sea.

Duterte’s failure to uphold Philippine sovereignty has raised the possibility of armed hostilities within Philippine territorial seas and is now leading the country right into the middle of an inter-imperialist conflict to the detriment of the Filipino people.

The Filipino people must resist China’s efforts to impose its imperialist power on the Philippines, economically, politically and militarily.

They must oppose the anti-people infrastructure projects which are set to railroad on the people’s livelihood, take away their ancestral lands, despoil the environment, fatten the bureaucrat capitalist, favor Duterte’s favorite big capitalists, and give China control of key resources, public utilities and services.

The Filipino people must demand the immediate dismantling of Chinese military bases in the Spratlys, an end to the interdiction of Filipino fishermen in the Panatag Shoal and Chinese recognition of Philippine territories under the UNCLOS.

The Filipino people must demand an end to US and China militarization of the South China Sea and demand all countries to withdraw their military forces in the area. They must pursue a policy of active peace and non-alignment and build unity among people to demand an end to the US-China saber-rattling.

To achieve peace in the region, the Filipino people must vigorously demand genuine Philippine non-alignment by scrapping such unequal military treaties as the Mutual Defense Treaty, the Visiting Forces Agreement and the Enhanced Defense Cooperation Agreement (EDCA). They must demand an end to US war exercises in the country and the military use of Philippine docks and airports by the US military.

They must advance the cause of economic sovereignty where the use of the country’s resources must help build-up agricultural and industrial self-reliance and raise capacity to produce food and other necessities of the people and accumulate surplus to bring the economy to higher levels, on the basis of which it can develop equal trade relations and economic cooperation with other countries.

The Filipino people’s struggle for national sovereignty and economic freedom are tightly intertwined. Their continuing aspiration compel them to resist imperialist domination by China and the US.