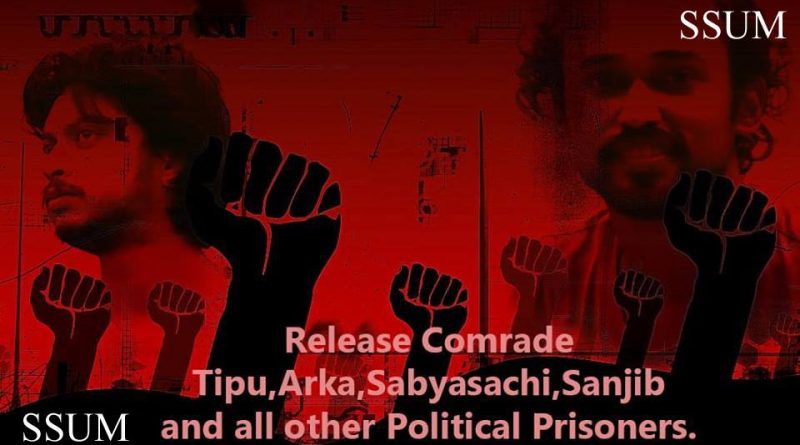 We come to know from various media reports that 4 activists of mass movement have been arrested by the police from Goaltore area of West Midnapur district. Among them two activists are student activists named Tipu Sultan and Arka Deep Goswami who are our beloved comrades from United Students’ Democratic Front (USDF), Kolkata. We also came to know from a reliable source that though police have arrested them on 12th of this month, they kept them illegally into their custody for 2 days after which only they were produced in the court on 14th of this month. Not only that, police officials have beaten them mercilessly in their custody. From media reports only, we could know that one of the students named Tipu Sultan has developed clots in his eyes because of severe torture by the police.

Also a case have been registered vide Goaltore PS Case No. – 220/18 dated 13.11.18 under Indian Penal Code Sections 121 (waging war against the state), 121A (conspiring to commit offence against the state), 120B (criminal conspiracy), 124A (sedition), and 149 (if an offence is committed by any member of an unlawful assembly, every other member shall be guilty of the offence).

Actually, from a report from USDF, the truth is that they went for a survey on the lifestyles of the people after which 7 people died out of starvation at Jangalmahal, West Bengal a week ago (according to govt. reports). Students and democratic activists were arrested on false-fabricated charges from Jangalmahal on allegations of engaging in Maoist activities. It is actually in tandem with the crackdown on democratic voices that we are witnessing nationally.

We, on behalf of Struggling Student organizations from various nations strongly condemn all of these illegal activities of the police authorities and demand strict action against the guilty. We all know that Supreme Court has clearly stated in its verdict that ‘guilt by association’ and ‘guilt by suspicion’ are not guilt at all. Hence, we demand the withdrawal of all the false charges leveled against the 4 activists and immediate and unconditional release of them.