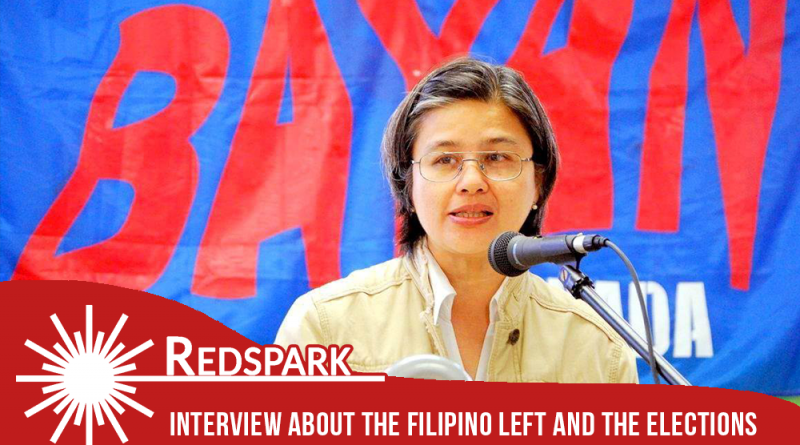 This week Redspark interviewed Dr. Carol Araullo about the recent filipino elections. Dr. Carol Araullo is the chairperson of Bagong Alyansang Makabayan (New Patriotic Alliance) or BAYAN. BAYAN was founded in 1985 at the height of the Filipino people’s struggle against the US-backed Marcos fascist dictatorship. Its political program in short is nationalist and democratic. It aims to arouse, organize and mobilize the Filipino people against neocolonialism and imperialism, against feudalism and against bureaucrat capitalism. BAYAN is a multisectoral alliance that includes alliances and mass organizations of workers, peasants, indigenous peoples, urban poor, women, youth and students, professionals, church people and human rights advocates. It has chapters nationwide as well as among Filipinos abroad.

Redspark: How did the Left fare in the recent elections? Why do you think it happened that way?

The Left, or more specifically, the MAKABAYAN Coalition (Patriotic Coalition) composed of the six party lists, i.e. Bayan Muna (Country/People First), Gabriela Women’s Party (GWP), Anakpawis (Toiling Class), Kabataan (Youth) Party List, and Alliance of Concerned Teachers (ACT), won 6 seats, one less than in the previous elections. Bayan Muna won 3 seats from just 1; GWP and ACT won 1 seat each down from previous 2; KPL maintained its one seat; while Anakpawis failed to win a seat this time. This is an astounding electoral performance considering everything including the kitchen sink was thrown at their leaders and members by the Duterte regime especially by the military, police and paramilitary forces — extrajudicial killings, illegal arrests, police raids on offices, trumped-up criminal charges blatant harassment including redtagging, smearing the progressives as “terrorists”, heavy surveillance and outright threats of harm, warnings to local government officials and other allies they would be prosecuted for aiding and abetting co-called enemies of the state and up to the imposition of martial law in the entire southern island of Mindanao and martial law-like conditions in the Visayas and Luzon. The campaign of the Makabayan Coalition was severely restricted and constrained by the abovementioned repressive measures. This was on top of the built-in disadvantages of political parties with their base among the poorest and most downtrodden ergo with very limited campaign funds for political advertisements in broadcast and print media, for conducting a nationwide campaign in an archipelago and for going against entrenched political dynasties and the Duterte-backed candidates. Moreover, the automated election system (AES) introduced in the 2010 national elections has been marked by an unacceptably large number of vulnerabilities to fraud, the lack of transparency in the voting and counting process, and the fact that a foreign company has been contracted to undertake and virtually control the entire AES which is an affront to the national sovereignty of the Philippines. Even as we are still doing the analysis of election data, we are convinced that manipulation of the vote has again taken place in this midterm election.

Redspark: Before the elections, activists were facing increasing and increasingly brutal repression, and red tagging. The situation post-elections cannot have improved, but can you talk a little bit about how the elections has or will embolden Philippines President Duterte’s tactics to repress those who are struggling for justice?

Definitely, the Duterte regime has consolidated its hold on the Legislature, both the Lower House and the Senate. The overwhelming majority of Duterte-backed candidates and incumbent allies in the Senate is the linchpin. The Senate in the first three years of Duterte acted as some kind of deterrent to the legislative measures that the regime wanted to railroad such as the move to change the Philippine Constitution in the guise of a shift to a federal system of government that would in fact prolong the terms of office of sitting government officials, strengthen the stranglehold of political dynasties aligned with Duterte over local governments, and steamroller neoliberal amendments that would complete the overhaul of the country’s economic legal framework in favor of foreign monopoly capitalists and their local big landlord and big comprador capitalist partners. Ominously, the Duterte fascist regime is pushing wide-ranging amendments to a deceptively-named draconian Human Security Act (touted as an “anti-terrorist” legislation and blatantly lobbied for by the US government) that will in effect impose de facto martial law conditions without the bother (and constitutional restrictions) of its formal declaration.

Since last year the democratic classes and sectors of working people – landless peasants struggling to end feudalism and semi-feudalism in the countryside; indigenous peoples resisting land grabbing of their ancestral domain; workers and low-salaried employees fighting for decent wages and job security; the urban poor opposing demolitions and fighting for affordable and accessible housing and basic services; students and out-of-school youth clamoring for the right to free public education and jobs; and small and medium-size business people straining under economic policies such as regressive taxation detrimental to local entrepreneurs — have been bearing the brunt of political repression. The entire island of Mindanao is under martial law and government’s counterinsurgency program is in full swing there, causing the displacement of entire rural communities and grievous human rights violations on the people. Meanwhile, in Negros, Samar and Leyte provinces in the Visayas and in Bicol and Southern Tagalog in Luzon, police, military and their paramilitary assets are on rampage as well carrying out massacres and mass arrests in the guise of intensified anticrime and counter-terrorism campaigns. On a national level, the redtagging and vilification of trade unionists, youth activists, peasant and indigenous peoples, human rights lawyers and advocates, religious leaders and other church workers and mass media practitioners as well as film makers and other artists is continuing with increasing viciousness, arbitrariness as well as deadly effect.

We are already seeing an uptick in cases of wanton and gross human rights violations before, during and after the midterm elections and are bracing for more intense and widespread political repression.

Redspark: Since 2001, this was the 7th time the Makabayan Bloc advanced candidates for elections. How do you assess these 18 years of electoral experiences?

There was a time, and rightly so, the Philippine national democratic movement had taken a rather dim view about participating in reactionary electoral exercises wherein the odds are stacked high against genuine candidates of the people in favor of the ruling elite. Periodic elections are used by the elite to perpetuate the illusion of democracy when only those from the same economic and political ruling classes or their surrogates dominate the race as candidates and inevitably as winners. The people can only “choose” among the elite who will take turns in ruling them. Their platforms of government are indistinguishable in terms of political philosophy, economic doctrine and concrete policies and programs.

As the saying goes, the outcome of Philippine elections is determined by whoever has the “guns, the goons and gold”. The guns and goons refer to both state security forces and warlord private armies; the gold to public funds as well as campaign monies raised from private vested interests including foreign sources. Obscene amounts of money are needed to pay for political advertisements in mass media; to fuel campaign machineries as well as engage in vote buying and rigging of the election results. Nothing has changed except the chronic crisis of the moribund Philippine social system continues to worsen. Abject poverty, backwardness and maldevelopment, the yawning gap between rich and poor are generating mass discontent and organized resistance from the people.

Thus, by 2001, it was seen that while the elections are still essentially and practically undemocratic, a new law on party list groups that represent the poor and marginalized in Philippine society, provided a space for contestation by progressive candidates and political parties. The need to provide a real alternative for an electorate disgruntled and weary of “traditional”, i.e. elite politicians, became more urgent. The easy part was putting together a comprehensive political program and a slate of capable and committed mass leaders. The hard and tricky party was how to improve the odds of winning in a dirty and one-sided political exercise without contributing to the illusion of democracy and foisting the false hope that fundamental reforms are forthcoming via such reactionary elections. There was also the fear that the mass base of the Left would be more exposed to the intelligence gathering of the state and such information would be used for targeted attacks and more intense political repression.

But the years have proven that the decision to enter the electoral arena has opened up many opportunities for the Left to conduct political education, mass mobilization and organizing and to widen its political influence through a broadening network of allies. The most rabid anti-Left and reactionary sections of the state found in the armed forces corroborate this assessment with the high priority they have given to delivering the Makabayan Coalition a knock-out punch in this elections. But they failed. It is the bourgeois opposition led by the anti-Duterte faction of the ruling elite that suffered the biggest electoral defeat.

Redspark: Everything that happened in these last elections is not a discrete group of events. Please tell us how you see them in terms of the larger context of the continuing revolutionary movement, particularly looking forward.

The reactionaries will continue to try to further constrict, if not completely close, the electoral arena to the Left but the more they do so, the more they expose to the people the undemocratic character of the elections and why mass struggles and the people’s movements are the more reliable means for empowering the people and bringing about fundamental change. Meanwhile the Left will have to adjust its tactics in order that participation in reactionary elections advances its strategic goals and is not self-defeating. And the Left must continue to undertake the gargantuan tasks of creatively arousing, organizing and mobilizing the people in their millions and more to defeat the corrupt, traitorous and brutal Duterte puppet fascist regime and eventually emerge victorious in upturning the reactionary status quo to bring about the bright socialist future in this part of the globe.