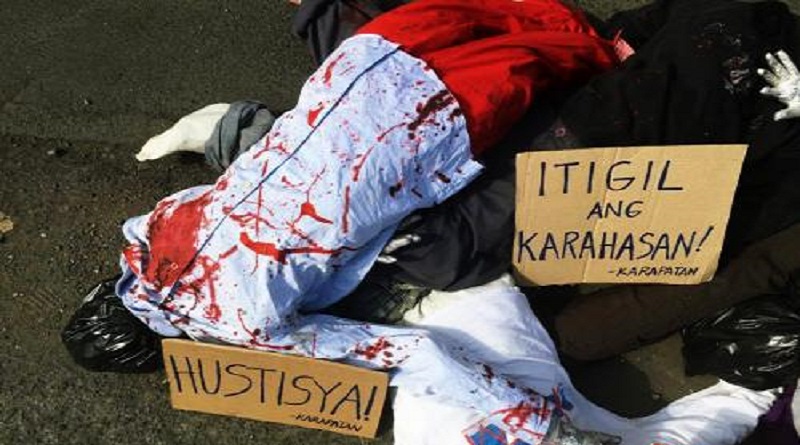 Human rights groups and other progressive organizations held a protest action today to denounce the violence and crimes perpetrated by police officers in the name of Oplan Tokhang.

“It does not come as a surprise that those sworn to safeguard citizens from crimes become the perpetrators themselves. It is their mercenary training, combined with the culture of violence and impunity, which makes men in uniform brutal and bloodthirsty. They are trained to kill in order to protect the powers-that-be. This is why the police force and the military are so used to committing human rights violations,” Clamor said.

“It is with the same reason that PO3 Franklin Kho ruthlessly rammed over protesters during a rally at the US Embassy; the same reason why police officers, who were supposed to issue a warrant, killed Albuera Mayor Rolando Espinosa inside jail; and the reason why thousands are being killed during police operations – because they are allowed too much police powers, too much impunity,” Clamor stated.

“The murder-kidnap-for-ransom of a Korean businessman was not an isolated crime committed by some ‘rogue’ police officers. It only reflects how syndicated and corrupted the police institution is,” Clamor added. “Pres. Duterte is partly to blame for this brutality because he encourages the police to kill in the name of his so-called “war on drugs”. Instead of punishing police officers for their abuse of power, Pres. Duterte even condones it,” Clamor said.

“Where else shall the people run to for help if the police and military are the attackers?” Clamor concluded.