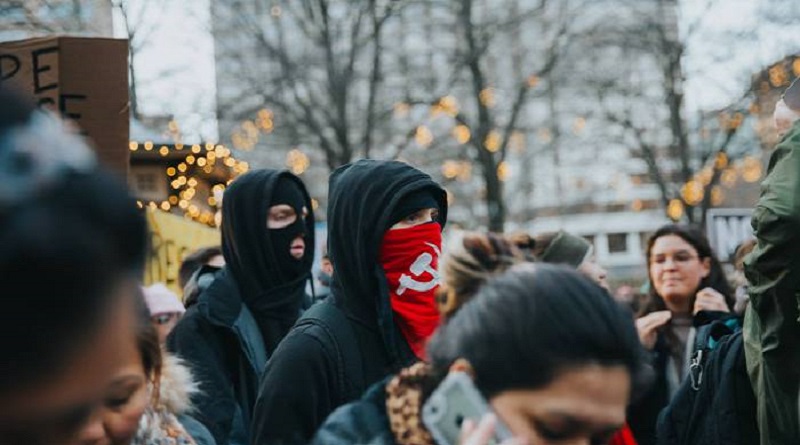 From January 24-27, the Republican Party held a convention at the Loews Hotel in Philly to discuss policies for the further fascization of the US, at which Trump gave a speech touting his speedy use of executive power to enforce this process. In continuity with the popular resistance against the Trump regime, thousands of people showed up in protest. What follows is a historical-political analysis of the situation, notes on our intervention in this protest on January 26th, and our present tasks. In this statement we also sum up what has been continuous throughout our interventions in the anti-Trump protests in our city.

Firstly, as Maoists, we analyze everything in light of the universal law of contradiction — that all things are a unity of opposites in motion. From this standpoint, we enter into any arena of struggle or resistance with the goal of identifying the opposing aspects so that we can begin to answer the questions necessary to achieve a political objective: Who are our friends? Who are our enemies? Only then can we begin to determine who the class-conscious and self-organizing elements of the masses are so that we can begin to unite and lead alongside them against all enemies.

At a protest in these times, the likelihood of identifying such people is negligible. Protests themselves fall into two categories: they are either a display of organizational power or they are a loose expression of discontent with the current state of affairs. For at least as long as this generation has been involved in any sort of political activity in Philly, it has been the latter, with various degrees of intensity and direction.

For example, the openly rebellious and combative energy of the resistance against extreme national oppression of Black people, starting around 2014, has waned in our city after the spontaneous wave of mass participation receded. A coalition of self-appointed career activists and revisionist party leadership has since struggled to keep it on life support through infinitely tamer reformist and symbolic initiatives.

However the new and ongoing massive resistance against the fascist Trump regime presents new openings, beginning with the highly combative response at the presidential inauguration (mainly due to the energy and sacrifice of anarchists) and the massive (albeit overwhelmingly white-chauvinist, liberal, and biological reductionist in character) Women’s Marches. But what kind of openings exist for us?

For a very small collective such as ours, the need to accumulate forces is vital to our very survival. We have already experienced the loss of cadre in the very short life of our collective, and the effect of this can be not only demoralizing but deadly to our very existence. The problem lies in the correct handling of the accumulation of forces to grow generally, what type of forces we are accumulating, and our most important task of entering the genuine mass movement: that is, organizing side-by-side with the masses in situations where there are real class enemies to clearly identify and real consequences at hand in both success or failure. This is why at this time we feel it is absolutely necessary for us to enter such demonstrations and attempt to exercise bold leadership.

Thus we enter the January 26th protest with this in mind. Nonetheless the first contradiction that we are faced with is that of people attending the march and that of the organizers. The event was called for by Philly Socialists, after which Socialist Alternative and Jewish Voice for Peace were tacked on to make it an ad-hoc coalition effort. Philly Socialists is yet another ideologically plural, left-unity, mass party initiative that is highly fashionable in the imperialist centers these days. Yet they are the dominant force in our city claiming to represent “socialism” (thoroughly gutted of its revolutionary content) and the darling of Jacobin readers. Socialist Alternative is a soft Trotskyist organization primarily based in universities and focused on economist reform initiatives among service industry workers. Their other recent activity has been tailing the Sanders’ campaign by adopting its “political revolution against the billionaire class” rhetoric, creating Facebook events after the election of Trump and then claiming credit for the size of those demonstrations. In reality, whoever made those Facebook events is inconsequential. People were going to march to protest Trump’s election regardless, and they overwhelmingly came out for Clinton, not socialism. Lastly, Jewish Voice for Peace is a human-rights organization for policy reform related to [our distinction] occupied Palestine.

The culmination of these politics are, regardless of the intent of the organizers and their most radical rank-and-file members, a fundamental orientation towards the intermediate & activists of a petty-bourgeois background and consciousness. The interests of the proletariat and other rebellious strata of the masses take a back seat (if they participate at all) to the incoherent “down with all the bad stuff” message of the activists. This is evident by the eclectic demands & sloganeering that were pervasive throughout the march, ranging from leftover Democrat party delusional cries of “not my president,” ridiculing Trump’s physical appearance, etc. There were demands of a more radical bent in the form of pro-immigrant, anti white-supremacy and feminist slogans to be sure. Lastly there were the assorted anti-Dakota Access pipeline chants, Black Lives Matter chants, and other various mundane repetitions of “this is what democracy looks like,” “whose streets, our streets,” and other tired phrases devoid of real ideological-political content that a revolutionary organization is supposed to put forward. Here we do not lay the blame on unorganized people themselves and their current lack of class consciousness. Marx has pointed out how the ideas of the masses are dominated by the ideas of the ruling class. Further, Lenin teaches us how people are victims of deceit and self-deception until they firmly take a class stand and fight accordingly. Here, we must then affirm that correct leadership is the decisive factor.

Due to historical misleadership, protests in Philly are quite frankly, mundane and formulaic. They follow a standard pattern of circling around Center City, punctuated by an occasional pause for a pep-talk, are tacitly sanctioned and corralled by police, and reach their most combative when police lines are (with little resistance) breached to continue along the path (in this case, the organizers would run down across the sidewalk and plead for “antifa” [meaning anyone with a mask] to run to the front and bust through the police line for them. We must question their lack of valor and disturbing view of forces more militant than them as cannon fodder). It would appear that in fact we are not “ungovernable” at all in 2017, despite attempts to assert otherwise.  Nonetheless we will always seek to push the limits and look for openings to exploit in order to deviate from this routine.

For our part, we saw the unifying objective to agitate around as being resistance against the Trump regime, so we decided to see how far we could push the limits of agitation. Due to the massive size of the march there were several loose contingents, so we felt no need to maneuver to the front when we had plenty of space and capacity to exercise leadership. Our modest bloc of supporters played a very crucial role in this as well. Things began energetically, with us leading militant chants such as “Love Doesn’t Trump Hate, Punch a Nazi in the Face,” “Fuck Trump, Fuck Pence, Organize for Self-Defence,” “Trump & Pence in a Ditch, Reign of Terror on the Rich,” and the classic “One Solution, Revolution!” We had limited success in hijacking chants, turning “Hey hey, ho ho! Donald Trump Has Got to Go!” into “Hey hey, goodbye! Donald Trump Has Got to Die” (much to the ire of a few surrounding liberals). In the moments where the march was paused, we timidly neglected to seize the opportunity to at the least pass out agitprop fliers for our organization and give agitational speeches. At one point, two people excitedly recognized us as Red Guards and asked for contact information which we provided, but due to our low energy at this point we failed to integrate them into our bloc. Another group who we planned to march with was able to meet us, but by this time the march had reached a blockade that could not be breached. We decided to give the people dispersing a final display by torching the US flag and giving an agitational speech on the crimes of this country – its past and present legacy of genocide, slavery and war, and the need to destroy this country by force of arms. This was received with curiosity and a few cheers, but probably not seen as anything more than a spectacle as indicated by the greater presence of photographers around us than anyone else.

The meaning behind our efforts remained abstract. We do not strive to be militant for its own sake nor for our own self-gratification. The purpose is as we said before, to accumulate combative forces to aid in mass work. Our chants were in essence to uphold revolutionary violence as good and not at all equivalent to reactionary violence, that fascism is only defeated though such revolutionary violence, and that the reign of terror on the rich will be made through waging Protracted People’s War and establishing the dictatorship of the proletariat. Yet these remained unclear and we failed to adequately connect our efforts to clearly assert the tools we need to enforce such a programme: a genuine Communist Party, a People’s Army, and a United Front. This in turn is also a failure to combat & discredit the ideological and theoretical poverty of the revisionist leadership of the march.

Returning to our assertion in the beginning, as Maoists we use the understanding of the law of contradiction to turn bad things into good things. In summing up experience we see the successes that lie within our failures. Our line of march continues and we will move forward in struggling to accumulate forces, enter the mass movement, and defeat revisionism to establish Maoism as the ideological guide needed for revolution.