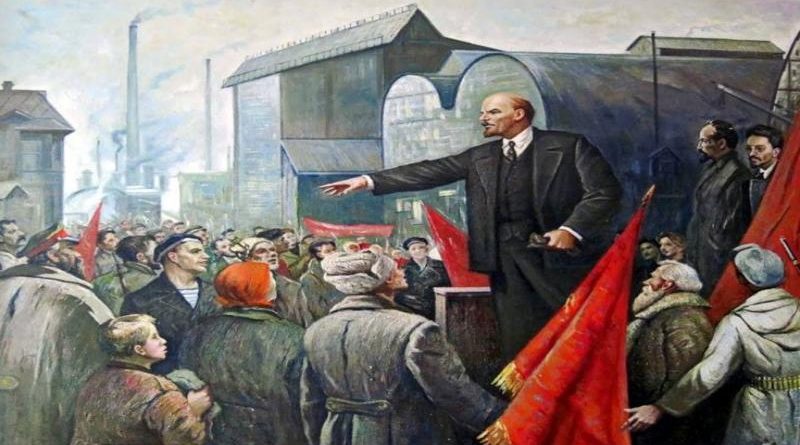 Having experience colonization and modern-day slavery in its fields and factories, the peoples of the Philippines are currently aspiring for national liberation and genuine democracy against their colonizers and exploiters. They are looking up and learning from the revolutions of several nations, including the North American revolutions, to enlighten them on how to struggle and to win.

It is an opportune time to celebrate the Great October Socialist Revolution because the Filipino people could take up a thing or two about the Soviet Russian experience during the era of Tsarism and the First World War.

Just like the Filipinos, the Russian peoples consisting of various nationalities have also aspired genuine liberation from the yoke of the so-called “militarist-feudal” imperialism in Russia during the time of their leader, Vladimir Ulyanov, also known as Lenin to his comrades-in-arms. Their country was plagued by imperialist oppression and plunder even after decades of the Stolypin reforms similar to the defunct land reform program of the Aquino regime in the Philippines in the 1980s.

The feudal-militarist ruler in Russia exploits their peasantry and proletariat while they collude with the British, French, Belgian and German financial aristocrats. The 1905 revolution and then the parliamentary struggles inside and outside the State Duma have harnessed the potential of millions of workers and peasants throughout the whole of Russia into building similar to that of the Philippine’s people power and they have called these as Soviet power.

Soviets are revolutionary organs of power consisting of peasants, workers and soldiers of the revolutionary army. They were organized by the Bolshevik Party of the Russian proletariat. The revolutionary army mainly came from the Tsarist army who turned away their rifles from the people and their foreign enemies and trained them instead to their aggressor, the Tsar himself.

Soviets gained ground in pressing their need for peace, land and liberty. Most of the small nationalities surrounding Russia heeded these slogans of Lenin’s Bolshevik Party and worked hard for these demands. With the Tsarist expensive wars of aggression against Japan and Germany in a tug-of-war for colonies, the people of Russia could not bear the brunt anymore. Exploitation increased on taxation, on industrial production for the war and on requisition of farm outputs.

The 1917 February and October revolution triumphantly broke the chain of Tsarism and imperialist aggression. Lenin led them all the way to the victory of the Soviets and to the solidarity of the Eastern European peoples in hailing the first socialist Soviet republic in the whole world. Since then, the socialist system has engendered the acceleration of the existence and downfall of the imperialist system.

The Philippines had their share of the Soviet spark that ignited the darkening of our colonial history. The first Filipino communists, led by the unionist Crisanto Evangelista, secretly entered Russia through China in 1928 in order to learn the Russian Soviet experience. They founded the Communist Party of the Philippines (CPP) on November 7, 1930, concelebrating the 13th anniversary of the October Revolution in Russia. They founded the Hukbo ng Bayan Laban sa Hapon (HUKBALAHAP) on March 29, 1942 and lead the guerilla warfare against Japan in an anti-fascist and pro-Allied united front during World War II. Throughout Luzon, these guerillas have implemented land confiscation from pro-Japanese landlords and traitors.

Enlightened by China-style guerilla warfare against the British and American imperialism and the local military-bureaucratic warlordism in China, the young Filipino communists led by Jose Maria Sison rebuilt on December 26, 1968 the PKP under the theoretical guide of Mao Tse-tung Thought.

Mao Tse-tung built their Soviet-style revolutionary government in Shanxi, a mountainous northern China loess plain, after their legendary Long March in anticipation for the intensified Japanese invasion in the whole of China in 1936. Enthusiastic support from their peasantry, the Chinese workers, middle class and city-dwellers came to these base areas, especially in Bao’an and Yenan, which culminated to an almost nationwide, self-reliant, anti-fascist counter-offensive against Japan in 1945. Yenan then became a catchword for revolutionaries in China.

The Philippines can and should aspire to put to action China or Russia’s soviet power experience in order to win in the Philippine revolution. The seeds have been sown since 1968 and the fruits have dispersed their seeds throughout the archipelago. Lenin’s notion of the transmission belts and Mao’s “three magic weapons” of the Party, the army and the mass base has been put to test for the past 48 years despite a temporary setback in the 1980s to the early 1990s.

The raw materials for building Filipino people’s revolutionary united front and Soviet power have been there from the start. With the impending intensification of the neoliberal policies of the Philippine state and the imposition of US dominance in Southeast Asia since its Asian-pivot policy since 2011, the Filipino people are again called to arms. The world has witnessed two world wars and are expecting a third that may spark in the Asia-Pacific region given that China has empowered itself militarily and economically as an imperialist power for the past four decades of policy regime changes after Mao Tse-tung’s time.

Having witnessed the bankrupt imperialist policies and reforms due to recurring convulsions of the world economic system, peoples and countries who had a taste of Soviet and democratic power in the past century preferred socialism as an economic system which needs to resurge. This new century is dawning wherein imperialism may encounter a crisis that is unprecedented. It may be terrible, but it’s fine.

The Filipino proletariat is in the right place today for launching anti-imperialist struggles. Together with the peasantry and the middle class, they can exploit the advantage of being able to break away from exploitation, national oppression and foreign domination in the economic, political, cultural and military fields should imperialist war break out once more. They have the CPP as the vanguard in liberating the nation first from US imperialism. They can foster solidarity outwardly with the peoples and democracies of the world against world war and against Asiatic and Pacific aggression of the imperialists. Their migrant workers also have a critical role in popularizing and gaining worldwide support for the Philippine revolution.

Internally, they can launch socio-economic development for workers and peasants, with local allies and international support, despite enforced evacuations due to disasters, militarism in Mindanao and national fascism. Areas discreetly claimed as revolutionary organs of power in the countryside are taking advantage of land reform and production campaigns, legal and extra-legal options, community initiatives for development and new methods of social networking combining internet technologies and word-of-mouth reportage.

Regarding their people’s army, the New People’s Army imbibes the spirit of whole-heartedly serving the people and the revolution. They utilize all available forms of propaganda to reach out to broad workers and peasant population. They are the most effective machinery of the Party in increasing and strengthening the mass base and in gaining both local and international support for the war. They educate the masses with the current trends in politics and various forms of open and underground organizations for them to perform heavier and heavier tasks. They can hit even the most fascist target wherever and whenever they can, with the people vigorously assisting them in launching tactical offensives.

These seeds, which may be termed Filipino Soviets, are still in their germination stage. But the aggravating crisis conditions could surely empower them for swift victory. All power shall soon be theirs.