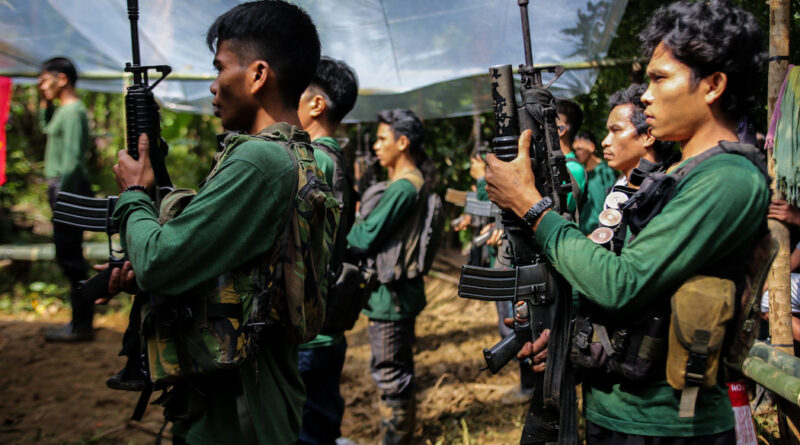 On the occasion of the 52nd measurement of the formation of the New People’s Army (NPA) on March 29, 1969, the NPA regional command on the island of Negros under the Apolinario Gatmaitan Command, paid its respects to all red commanders and red fighting and recognizing the victories achieved in the trade of armed struggle.

We give the highest honor and salute to the comrades who sacrificed their lives just to advance and strengthen the armed struggle of the people. The masses will not be forgotten and with them are Ka Troy, Ka Pido, Ka Jonas, Ka Diego, Ka Jeck-jeck, Ka Eron, Ka Bong, Ka Mayte, Ka Jun, and Ka JK. Their names and heroism have been etched in the revolutionary history of the people.

We are proud of the victories achieved over the past year in advancing the stage of the people’s war in response to the executioner and fascist attacks on the US-Duterte regime and the continuing worsening conditions of oppression and exploitation. Without the NPA, the people will have nothing and no bright future for the Filipino people, especially the workers and peasants.

Simultaneously with the launching of the armed struggle, the NPA helps to establish the local organ of political power, strengthen the secret mass organizations as the pillar of the revolutionary government, helps to improve the economic condition of the people, improvement of health trade land reform within the guerrilla front.

The NPA as the people’s army, is the major instrument of the Communist Party of the Philippines (CPP) and the entire Filipino people carrying the central task of destroying the military machinery of the bureaucratic state, seizing power. politics and launching the National Democratic Revolution through armed struggle as the highest form of revolutionary struggle. All the Operational Plans (Oplans) of the various regimes from Marcos to Ninoy Aquino have been defeated and thwarted and, of course, the tyrannical and butcher Duterte regime will also fail.

In the entire history of armed struggle in the Philippines, only the NPA has built the broadest, most comprehensive and most powerful army fighting for the national and social liberation of the people. Serving the people without self-denial, coming mostly from the peasants as well as the workers, intellectuals and professionals is even loved and recognized by the masses as their true army.

Any denigration and calling of the NPA terrorists by the US-Duterte regime and mercenaries and executioners AFP/PNP will not destroy the name of the NPA instead the people will prove that the US-Duterte regime and the mercenary and the butcher AFP/PNP are the real terrorists because of their atrocities against the people especially in the horrific incident of the Sagay Massacre and the conduct of Simultaneous Enhanced Management of Police Operation (SEMPO) in Guihulngan City and Canlaon City and Synchronized Anti- Criminality and Law Enforcement Operations (SACLEO) which to date is ongoing throughout the country.

The NPA has grown from small and weak to large and strong and has repeatedly thwarted the efforts of successive regimes to destroy it. In the first Honorable Panadlong Movement in 1969, the NPA just started with more than 60 red fighters with nine automatic rifles and 26 low-caliber weapons, there were 80,000 people on the mass base in the second district. in Tarlac. Today the revolutionary force of the whole country has reached more than 110 guerrilla fronts, mobilizing 73 provinces and 17 regions.

Particularly on the island of Negros, after the treacherous revisionist uprising in 1994, just over 60 red fighters and forces on the plains joined the Second Honorable Panadlong Movement. It affected only two barangays and the mass base was almost destroyed. The enemy tried to destroy the forces that joined the Panadlong movement by launching “Operation Flash Out”, battalion forces were mobilized to find and destroy the remaining comrades who joined the Panadlong Movement.

Despite severe difficulties, it succeeded in thwarting the enemy’s intention to completely destroy the revolutionary movement on the island of Negros.Currently there are five guerrilla fronts operating from the North to the South of Negros. Based on the established strength of the revolutionary movement throughout the country and in particular on the island of Negros, it no longer has the capacity to destroy any regime that will take turns.

The plan of the tyrannical Duterte regime to destroy the revolutionary movement will only create widespread human rights violations as Extra-Judicial killings can only reap the condemnation of the broad masses.

The social condition of the population continues to deteriorate due to the rising prices of major commodities while wages and unemployment remain low. Debt growth that reaches more than ₱ 10 trillion is guaranteed to be paid by the people through high taxes.

Millions suffer poverty due to homelessness, lack of public health services and facing the problem of covid 19, poor educational services and measurable conditions of the urban poor. In the countryside, millions of peasants suffer from feudal and quasi-feudal exploitation. The corruption of the Duterte family and its accomplices in his cabinet and the AFP/PNP will also spread. The worsening drug problem continues unresolved because the Duterte family is the very strong protector of drugs.

Faced with the problem of pandemic and poverty, the people have no hope but to join the armed revolution led by the NPA which will solve the long-standing problem of the peasants of self-sufficiency, land.

As a true people’s army, the NPA in Negros will continue to intensify the launching of tactical offensives to inflict thousands of wounds on the executioner and fascist US-Duterte regime with a long list of crimes against the people. The NPA will further intensify these offensives in order to adequately arm the growing number of the best children of the people who are joining the NPA.

To all the red commanders and red army under the Apolinario Gatmaitan command, let us intensify the launching of tactical offensives throughout the island to pay dearly for the fascist agents of the US-Duerte regime and defend the rights of the people, raise their form of struggle for land reform, establishment of mass organization and organs of political power. Together with the broad masses we will celebrate the 52nd anniversary of the NPA by intensifying the armed struggle until the US-Duterte regime is ousted.

Long live the 52nd anniversary of the NPA!

Continue the Armed Struggle to victory!