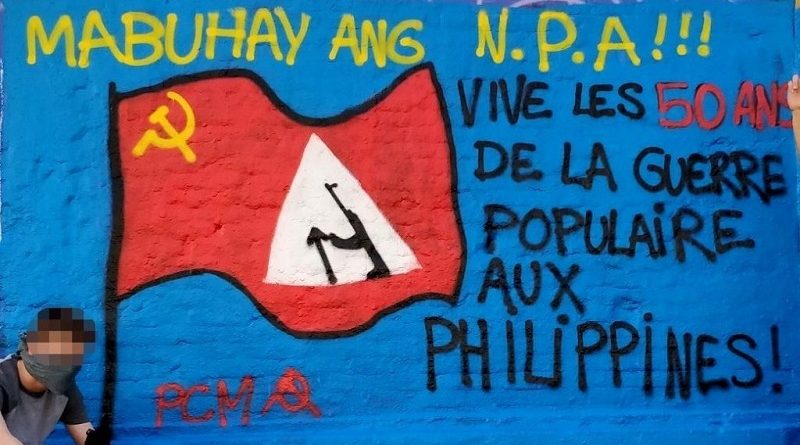 On March 29, 2019, the New People’s Army of the Philippines celebrates its 50th birthday. This anniversary is an opportunity to return to the heroic path of the Communist Party of the Philippines (CPP) and the New People’s Army (NPA). A story of exemplary revolutionary struggle at the service of the masses against the three mountains that crush the Filipino people: imperialism, bureaucratic capitalism and feudalism. This People’s War led by the CPP and the People’s Army, the NPA, is an inspiration for people all over the world aspiring to liberation.

The NPA: 50 years of People’s War under the leadership of the Communist Party of the Philippines

The struggle of the Filipino people is old: from 1895, it started a war of independence against Spanish colonialism with the national bourgeoisie. American imperialism, which was developing throughout Latin America and Asia-Pacific, threw its claws on the Philippines at that time, entering the war against the first Republic of the Philippines in 1899. Among the most important martyrs of this period, let us note the immortal name of Andres Bonifacio who inspired and continues to inspire generations of revolutionaries.

US imperialism forced the occupation of the Philippine archipelago by a fierce war, killing between 12,000 and 20,000 independence fighters, and more than 200,000 Filipino civilians. After 3 years, the Yankee occupier imposed a new regime and colonization under “protectorate” of the Philippines. In the south, the campaign of “pacification” of the Yankee imperialism in Mindanao against the Moro people lasted until 1910 because the Moros resisted fiercely.

It was under American occupation that the Communist Party of the Philippines was born in 1930. It was very quickly made illegal. During the Second World War, the Philippines was occupied by Japanese imperialism which dominated the archipelago from 1942. Succeeding American imperialism, Japanese imperialism imposed itself with immense brutality such as with the march of death of Bataan that caused more than 20 000 deaths in April 1942. Hukbalahap (“People’s Army Against the Japanese”) guerilla warfare was created by the Communist Party to lead the resistance against Japan, especially on the island of Luzon with Mount Arrayat as its base. For the first time, the national liberation struggle is being waged directly under the leadership of the communists and no longer under the leadership of the bourgeois political forces.

During the US offensive in the Pacific in 1945, US imperialism regained control of the Philippines. The US military first concluded an alliance with the Hukbalahap before betraying them and liquidating them. The Communist Party of the Philippines, led by opportunists on the right, then entered a period of legalism and decided to focus its strategy on participation in Parliament. This strategy is a failure and the Party, which has only few candidates elected to Parliament, is quickly banned from the latter. He then reactivated the armed struggle with the left opportunist hope of a quick victory in a period of two years. For US imperialism, the Philippines is the most important gateway to Asia, so the “independence” they give in 1946 to the archipelago is only formal. They install their comprador puppets in palaces and militarily support the fight against the communists until 1954 when the People’s Liberation Army undergoes very heavy reverses.

A few months after its reconstitution, the Communist Party of the Philippines founded the New People’s Army (NPA) on March 29, 1969, rallying veterans of the Hukbalahap and young communists by giving an authentically communist leadership to the revolution. When the NPA was formed it had only 60 fighters armed with 9 assault rifles and 26 single shot guns and pistols. In the Philippines is then born the Protracted People’s War, led by the Communist Party leading the New People’s Army (NPA) and the National Democratic Front (NDF) for the revolution of new democracy against imperialism, the comprador bourgeoisie, and towards socialism.

Since 1969, the NPA is the People’s Army, politically led by the Communist Party of the Philippines. “Without an army like the NPA, the people have nothing,” Amado Guerrero wrote, paraphrasing Mao Zedong. This People’s Army will grow considerably during the dictatorship of Ferdinand Marcos who declared martial law in 1972. Under his brutal dictatorship backed by US imperialism, the NPA will experience major leaps that will make it the people’s army as we know it today.

The NPA: invincible because in service of the people!

The armed struggle of the New People’s Army in the protracted People’s War is invincible, because it is right and the NPA proves every day that it is in service of the people, and that the masses are defending it with all their might.

According to the basic rules of the NPA, it is the main organization of the Communist Party of the Philippines, constantly and deeply linked to the masses. Above all, it carries out the political work of building and organizing the New Power of the Popular masses based mainly on the alliance between workers and peasants. Its three tasks are to lead the protracted People’s War, to mobilize and defend the masses, and to promote their national and democratic interests.

This shows the role of the NPA in the revolution: by mobilizing the masses and by creating and supporting revolutionary militias and popular self-defense units, it gradually moves the masses from disorganized and disarmed to organized and armed. By organizing the masses for the local People’s Government and defending the popular tribunals, organs composed by the masses themselves, it guarantees the construction and extension of the New Power. Putting the political work with the masses, the propaganda and the defense of the masses and their interests first, the NPA is in service of the people, and a force authentically supported by the masses can accomplish everything.

The NPA follows the 3 Grand Rules of Discipline and the 8 Points of Attention of President Mao to maintain a revolutionary line and exemplarity towards the masses. With its strict discipline and openness to people of all sex, gender and sexual orientation, the NPA guarantees a truly popular army, which does not take advantage of the oppressions of semi-colonial semi-feudal society. Under the leadership of the Communist Party, the NPA is the main organization of the masses for their liberation, unlike the mercenary paramilitary groups that sell themselves to the government and foreign firms.

For example, the NPA plays an important role in ensuring the health and well-being of the masses in areas where the reactionary government leaves poor peasants and farm workers without any protection. It provides general and political education for a growing number of Filipinos in its mass base. When the reactionary government attacks the NPA, it targets schools, care camps, and all that makes the NPA a People’s Army. By attacking the NPA, the government of the old state attacks the masses directly. 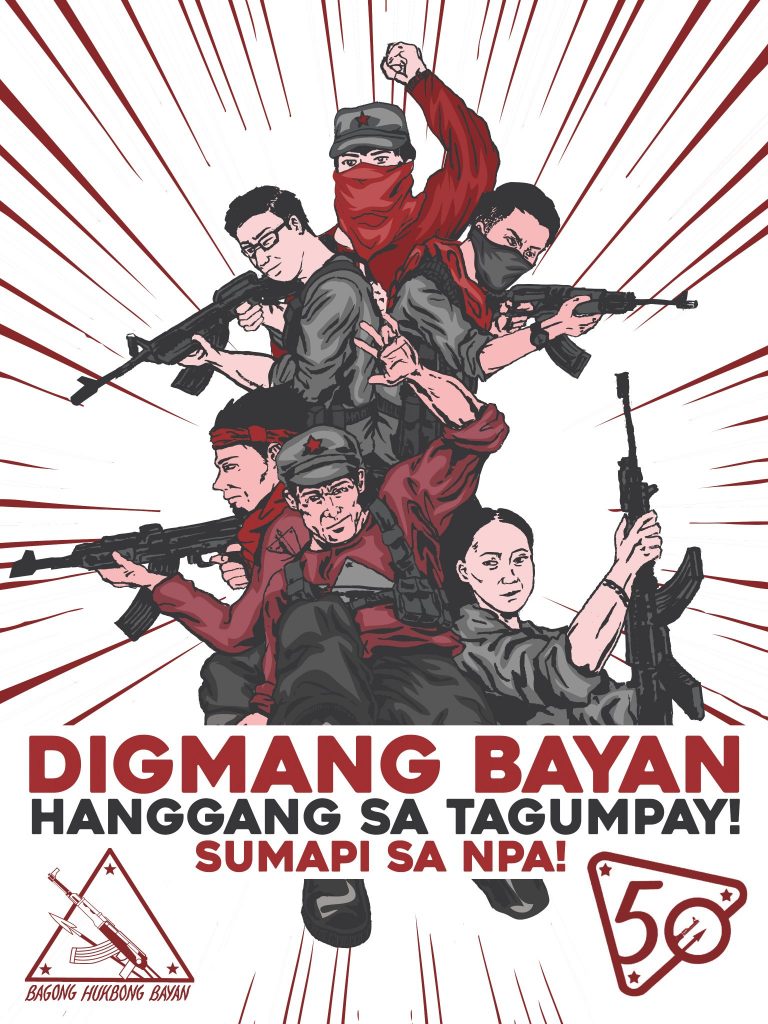 The NPA: an example for the peoples of the world!

Faced with all the obstacles and difficulties, the NPA has not failed for 50 years. US imperialism used ferocious fascist dictatorships, like that of Marcos in the 70s and 80s, and the People’s War came out stronger. Against revisionism within the revolutionary movement and liquidationism, the armed struggle of the NPA emerged victorious from the Second Great Rectification Movement of the 1990s within the Communist Party of the Philippines.

Recently again, the NPA has shown us its incredible ability to inflict deadly blows on the enemy. In December 2018, in Agusan del Sur on the island of Mindanao, an entire detachment of CAFGUs (Citizen Armed Force Geographical Unit, a paramilitary unit of the government) and a Special Forces battalion were put out of action ,with 24 large caliber rifles seized from the enemies of the people taken prisoner without the NPA having to fire a single shot. In February 2019, the NPA supported the struggle of several thousand Mindoro residents against a hydroelectric project that would force many displacements and devastate the environment. Peacefully gathering the workers and informing them of the reasons for their action against the capitalist company behind the project, the NPA soldiers disposed of 44 heavy construction vehicles. A week before, in Mindanao, the NPA had stormed and successfully invaded the patrol base of the 1st Special Forces battalion, known to defend the multinationals from attacks by the NPA. On March 27, 2019, in the Eastern Visayas, two brothers escaped the police who wanted to torture and execute them and voluntarily surrendered weapons and ordnance to the nearest NPA unit by agreeing to submit to the revolutionary justice.

President Mao wrote that it is the masses who make history. In the Philippines, this truth is embodied in the heroism of the Party-led fighting masses, who are fighting against all forms of exploitation and oppression in a semi-colonial semi-colonial society dominated by imperialism. It is this heroism of the popular masses that we honor when we celebrate the New People’s Army, because it is in the depths of their pulpit that the masses lead the fight for revolution in the highest form of class struggle: the People’s War. These are the fighters of the NPA. It is the women of the people who are liberating themselves in the revolution, like the martyr Maria Lorena Barros, while the current President Duterte wants to “shoot them in the vagina”. These are all the martyrs of the revolution in the Philippines, fallen for the just cause of communism, the struggle to victory, and the great international workers movement. Their memory is our memory, their struggle is ours. Those who have given their lives for the cause of the people have not given it in vain, because all over the world the Marxist-Leninist-Maoist parties and organizations are working to raise the red flag. And one thing is certain: we will win because the future belongs to communism.

The CPP and the NPA show each day in practice the strategy of Protracted People’s War, the universal strategy of the proletariat for the seizure of power. The NPA is a productive army, an army that sets up the democratic principles of popular government, an army in service of the masses, and shows us what is universally essential in the People’s War: the New Power.

To express our solidarity with the People’s Wars, we must popularize their struggles internationally, beyond their borders, and build real international solidarity against the massacres of imperialism and the reactionary governments of the old bourgeois state. Lenin teaches us that proletarian internationalism demands fighting against our own imperialism, an accomplice and actor in the struggle against the peoples of the world and against the Communists.

Our solidarity with the People’s War in the Philippines demands that we learn from it and all the People’s Wars for our own liberation. We must today build the 3 instruments of the revolution in the French state. The People’s War is to be subjected to the concrete conditions of the French State, which is an imperialist country whose reality is very different from semi-colonial semi-colonial Philippines. The People’s Wars are for us shining examples of the road to revolution and our demands as communists can not be accomplished without drawing all possible lessons from these immense struggles.

The Communist Party of the Philippines and the NPA are now hard-pressed to lead the popular masses of their country to free themselves from imperialist yoke and capitalist barbarism by the just way of the People’s War. Comrades, you carry the red flag high in the eyes of the Philippines and the world, you fight the capitalist domination of imperialism in the most concrete way. Digmang Bayan hanggang his tagumpay! People’s War until the total victory!

Long live the 50th anniversary of the New People’s Army!

Long live the ideology of the proletariat, Marxism-Leninism-Maoism!