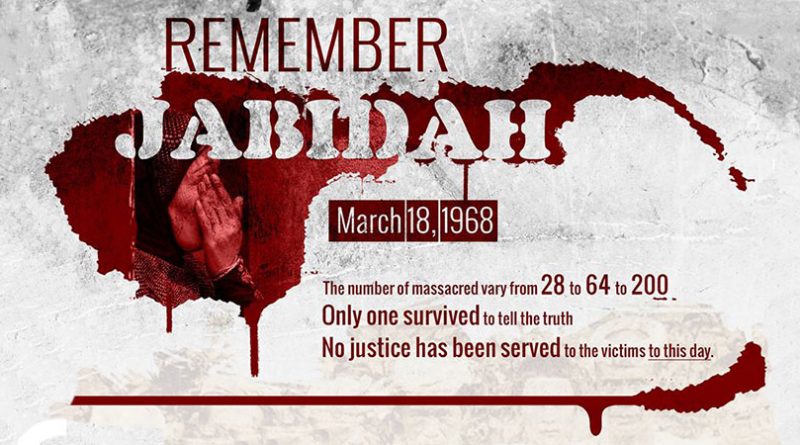 Today, March 18, 2018, the people will commemorate the 50th year of the gruesome massacre of Moro youth in Corregidor, the Jabidah Massacre.

The said incident was due to the aborted Oplan Merdeka, which the dictator Ferdinand E. Marcos secretly planned. Under the Oplan, the Jabidah expeditionary forces, composed of young Moro recruits from Sulu, were to be organized to execute a plan to invade Sabah and seize it from Malaysia. Marcos used the historical territorial claim of the Sulu sultanate, represented by the Kiram clan on Sabah in order to seize its rich natural resources and bustling trade.

Oplan Merdeka was devised not to give the Moro people their right to self-determination, but instead for the expansion of scope under Marcos’ dictatorship. From here, he could offer wider lands that would then become the source of raw materials to feed to imperialist industries especially the US.

In a testimony of a survivor of the said massacre, he recounts the macabre and brutal massacre after they voiced their complaint of discrimination and corruption among the military officials who trained them. The state then perpetuated its terror by burning a mosque in Buldon, Maguindanao on March 22, 1970 and massacring 70 Moros in ManiliM, Carmen, North Cotabato on June 1971.

Today, 50 years had passed, yet it seems that the succession of administrations only buried the demands of the Moro people for justice to oblivion. In its place, adding insult to the wound, the present administration of Rodrigo Duterte further fans the flames of the Moro people’s indignation. He declared martial law in Mindanao on May 23, 2017, which was aimed against the Moro people in Marawi City, in the guise of pursuing the Maute armed group.

State terrorism against the Filipino people is incessant through bannering its macabre killing campaigns. Among these are the ceaseless slaying of political activists through Oplan Kapayapaan and of minor drug users through Oplan Tokhang where 14,000 victims were accounted. It is then blatant that the state does not have a single concern of putting an end to its terror, but instead aims to aggravate its attack against the Moro people and those who opposes his fascism.

In light of this year’s 200th anniversary of Karl Marx, his basic principles remain valid and justifiable. The lone resort of the oppressed people is through embracing arm struggle. Marx taught us the comprehensive philosophy and correct strategies and tactics in opposing imperialism and attaining socialism. The Jabidah and Buldon Massacres were concrete examples of imperialist brutality which were represented by its puppet Marcos and by the war crimes by the present Duterte regime through roughshod bombings against Lumad and Moro communities and killings of political activists.

Furthermore, various Moro people are now carrying out the correctness of the armed struggle with Marxism-Leninism-Maoism as its theoretical guide. The Moro Revolutionary Liberation Organization (MRLO) was established as an underground organization for Moro revolutionaries. Several Moro individuals are now members of the Communist Party of the Philippines. In addition, to overthrow the reactionary state’s political power, various Moro are now holding arms with the New People’s Army.

Hence, the National Democratic Front – North Central Mindanao Region is one with the Moro people in intensifying the armed resistance against state terrorism and discrimination and in further advancing the struggle against US Imperialism.