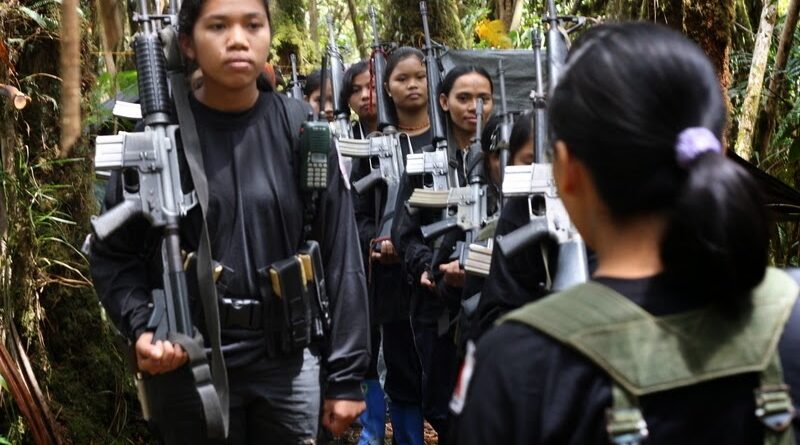 March 8, 2021: The National Democratic Front of the Philippines-Southern Tagalog (NDFP-ST) extends its strong and sincere solidarity to the Filipino people in commemorating and celebrating International Working Women’s Day on March 8, 2021. We deserve to commemorate this international day of women to revitalize, highlight and elevate the important role of women in Philippine society in particular and in the struggle for national independence and democracy as a whole.

The potential strength of Filipino women is invaluable in achieving fundamental and radical changes in Philippine society. More than 50% of the country’s population are women. More than 70% of women in the country are workers, farmers and the urban poor. The bulk of women are found in the countryside of the country. In this situation, women are powerful forces of revolution that need to be aroused, organized and mobilized in the millions as they are.

The NDFP-ST congratulates the Makabayang Kilusan ng Bagong Kababaihan (MAKIBAKA) which is one of the NDFP’s affiliated organizations for leading the commemoration and celebration of international women’s day on March 8, 2021. Our greetings to the women fighters of the New People’s Army (NPA) in Southern Tagalog (SW) which is now busy, together with members of MAKIBAKA in conducting various activities in the region’s countryside to commemorate and celebrate international working women’s day.

Above all, the NDFP-ST congratulates and pays tribute to the women from the working class who are at the forefront of the Filipino people’s struggles for national independence and democracy. Your courage and dedication in advancing the struggles not only for your rights and well-being as women but above all in advancing the welfare and class interests of the broad masses of the Filipino people is admirable.

In particular, the NDFP-ST recognizes and commends all the efforts and heroism demonstrated by women’s groups and organizations in defending freedom of speech, press and assembly to convey their grievances and requests to the government. The militant actions taken by the women’s legal democratic movement against the neo-liberal and anti-people policies of the US-Duterte fascist regime, in defending national sovereignty against open US imperialist intervention and aggression, are commendable.

Since the US-Duterte fascist regime came to power, the previously depressed and miserable condition of the Filipino women and people has worsened due to the continued existence of the regime’s anti-people policies and programs. This was followed by the repressive lockdown implemented by Duterte in accordance with his militarist approach to dealing with and fighting the Covid-19 pandemic. Women are also suffering severe insults, ridicule and underestimation from Duterte. In many instances, Duterte’s public statements always mention obscenities, insults and disrespect for women. Even the serious and sensitive issue of incidents of rape of women is made the butt of Duterte’s humor by repeatedly exposing to the public sexist statements and “rape jokes.”

Aside from the front, a large number of women activists and human rights defenders have been imprisoned due to fabricated cases and evidence planted by the AFP and PNP such as the experience of Reina Mae Nasino, Amanda Echanis, Lady Ann Salem and hundreds of political detainees in the country. Blessed is journalist Lady Ann Salem who was released on March 5, 2021 after nearly three months in jail after the Mandaluyong Court dismissed the fabricated cases filed against her by the PNP-NCR.

Not even the well -known and well -known personalities of women in the country like Sr. Mary John Manansan, actresses Angel Locsin and Liza Sobereño and former Miss Universe Catriona Gray in the relentless red-tagging of the US-Duterte fascist regime. What happened to women Zara Alvarez, an ardent advocate and defender of human rights in Negros Island and Dra. Mary Rose Sancelan, head of the Covid-19 task force in Guilhulngan City, Negros Oriental. They were mercilessly killed by the Duterte regime’s death squads after experiencing red-tagging from the AFP and PNP.

Duterte only exposed his brutality and low regard for women when he ordered the AFP and PNP to shoot NPA women fighters on their genitals. This order by Duterte explicitly disregards the existing humanitarian laws of war under the United Nations Convention of 1949 and Protocol 1 of 1977 and the Comprehensive Agreement on the Respect of Human Rights and International Humanitarian Law (CARHRIHL) signed agreement between the GRP and NDFP.

In this way, women and the people have a legitimate reason and basis to call and struggle to oust the corrupt, traitorous, rude, misogynist, anti-women and people, criminal and murderer Rodrigo Roa Duterte.

The NDFP-ST believes that commemorating international working women’s day is not just to recall the victories the women’s movement has achieved in the past against exploitation and oppression. It is also a time to reaffirm the unity and determination of the oppressed and exploited women to continue to fight for complete victory against the anti-people policies of the reactionary state, against fascism and state terrorism, against culture of discrimination, disrespect and treatment of women as men’s hobbies. At the same time, women’s awareness and understanding must be vigorously raised that only exploitation and oppression and the misrepresentation of women as inferior to men must be fully raised with the victory of the People’s Democratic Revolution (DRB) and the ensuing socialist revolution and construction. Millions of women need to be awakened, organized and mobilized for the advancement of DRB.

On the same day, the revolutionary movement in the Southern Tagalog region relives the memories and heroism of the women martyrs of the revolution in the region who in their time sacrificed their unique lives for the service of the people. We once again honor and honor Maria Lorrena Barros, Leticia Pascual Ladlad, Rizalina Ilagan, Cristina Catalla, Jessica Sales, Emma Travinio, Rosario Lodronio Rosal, Aniceta Rosanes Vallever, Pamela Jane Lapiz, Nora Rosanes Padilla, Lorelyn Saligumba, Andrea Rosal, Rona Jane Manalo, Justine Vargas and other women martyrs of the revolution in our region. They enthusiastically performed various duties as Party cadres and officers of the New People’s Army. They were exemplary revolutionaries of their time and continue to serve as an inspiration not only to the current women’s liberation movement but to the entire revolutionary movement in Southern Tagalog because of their courage, zeal and heroism in advancing the DRB in the region. In their time, they, ten of all women martyrs, rightly upheld and upheld the revolutionary movement’s stand that only with the victory of the DRB at the same time free women from the oppression and exploitation of imperialism, feudalism and bureaucrat capitalism and from in the rotten and decadent feudal and bourgeois culture that pervades semicolonial and semifeudal Philippine society.