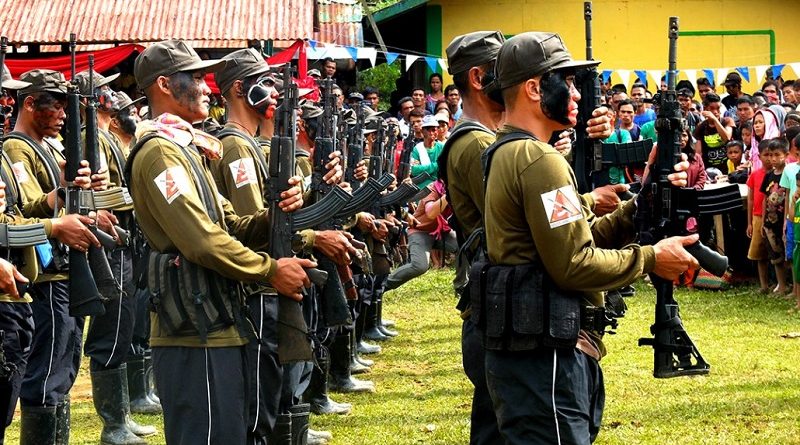 People's War Philippines
February 3, 2017February 3, 2017 C. Kistler Ceasefire, CPP-NPA-NDF, Ka Oris
Ka Oris, Spokesperson
New People’s Army
February 3, 2017
Units and commands of the New People’s Army (NPA) have carried out at least 20 military actions across the country over the past five days in response to the clamor of the people to defend their rights and welfare against fully-armed occupation troops of the AFP.
Initial reports from various commands have alerted the NOC on successful active defense manuevers in the provinces of Agusan, Surigao and Davao; as well as in Bukidnon and Sultan Kudarat in Mindanao, Isabela and Batangas in Luzon and in Panay in the Visayas.
At least five AFP soldiers have been captured and are being treated as POWs. A number of AFP officers and men have been killed and wounded in the armed attacks. A couple other military actions have been carried out against the destructive and landgrabbing big enterprises in Davao, Bukidnon and notably, against big comprador Henry Sy’s security forces in Batangas.
This active defense posture is but an inevitable consequence of the Duterte government’s obduracy and duplicity in continuing offensive operations under then Oplan Bayanihan and presently Oplan Kapayapaan in violation of the spirit of the ceasefire declarations reciprocally declared by the GRP and the NDFP. The AFP has refused to heed repeated calls for withdrawal of their troops.
Most of the NPA military actions have targetted the so-called “peace and development teams” of armed troops of the AFP which have entrenched themselves at village centers, usually making use of barangay halls, day care centers and public schools as their barracks. They also occupy homes of farmers, virtually making community residents human shields against NPA attacks. These soldiers are the subject of numerous complaints over grave violations of human rights, intimidation, threats and other abuses against the barriofolk.
The AFP desperately wants to gain sympathy by spreading the lie that the presence of these teams have been “requested” by barangay officials, when in fact, they just intimidate local officials to sign blank papers. They also spread the lie that soldiers are bringing relief goods or carrying out relief operations. They make use of so-called “delivery of social services” to forward deploy their troops within the guerrilla zones of the NPA.
The leadership of the CPP and NPA announced on the other day the termination of its August 28, 2016 unilateral declaration of interim ceasefire. In line with this, the NPA urges the AFP and the Duterte regime to pull out all its troops from more than 500 barrios before February 10. If it does so, together with the release of all political prisoners, it may preempt the complete termination of the unilateral ceasefire declaration of the CPP and NPA.
Otherwise, the NPA has orders to take full initiative and carry-out tactical offensives against the AFP, PNP and all armed entities of the reactionary state.