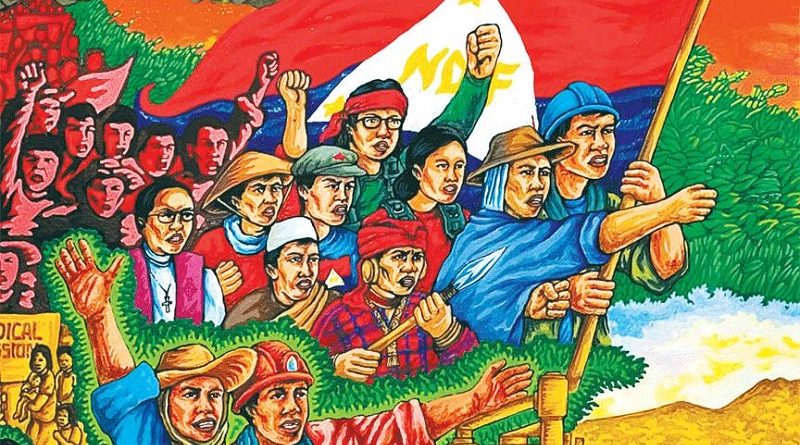 The National Democratic Front of the Philippines (NDFP) and its allied revolutionary organizations including the Communist Party of the Philippines and the New People’s Army, extend warmest militant greetings of solidarity and congratulations to the Red Block Jugendwiderstand on the occasion of the weekend activities including the Cultural Event and Demonstration this January 2017.

They devoted their lives to the struggle against imperialism and to the pursuit of socialism. It is necessary for the world´s people, especially the youth, to honor and emulate their deeds, and to be inspired by their relentless efforts to establish a new system where exploitation and oppression do not exist.

The entire world is mired in grave economic, financial and social crisis. The crisis of the world capitalist system continues to worsen, escalate exploitation and oppression and generate state terrorism and wars of aggression. The proletariat and people of the world are steadily waging all forms of resistance.

The rise of people’s resistance and demand for socialism in the imperialist countries have grown in importance. The spread of armed revolutionary and other forms of resistance in the underdeveloped countries is bound to deprive the imperialist powers of easy sources of superprofits and sap their strength.

The building of united resistance against US-led imperialism and wars of aggression, militarism and economic terrorism is imperative. The youth have an important responsibility and role in waging the struggle for social change.

In the Philippines, the revolutionary movement has been waging the national democratic revolution for the past 48 years under the leadership of the Communist Party of the Philippines to end the semifeudal and semicolonial system that that has relegated the working classes to foreign and feudal domination. They suffer landlessness, unemployment, poverty, violations of their rights and interests. Thus they support and participate in the revolutionary struggle.

As the revolutionary forces wage people’s war, they are also engaged in another arena of struggle, the peace negotiations. The national democratic movement represented by the NDFP is holding peace negotiations with the Duterte government for the purpose of achieving agreements on social and economic reforms; and on political and constitutional reforms in fulfillmentof the people´s aspirations peace based on justice, democracy, genuine independence and respect for people´s rights.

We believe that the greatest contribution of the Filipino people in the world struggle against imperialism and all reaction is to bring to victory the Philippine revolution.

Comrades, we wish you success in your weekend activities. We are with you in your efforts in building and strengthening the links among the revolutionary organizations in Germany and in other countries. We are with you in instilling among the youth a strong, organized and disciplined revolutionary expression to the socialist aspirations of the proletariat and people in your own country and all over the world.

We are with you in calling for a broad united front of all revolutionary organizations and forces to struggle against imperialism and all reaction and for socialism.