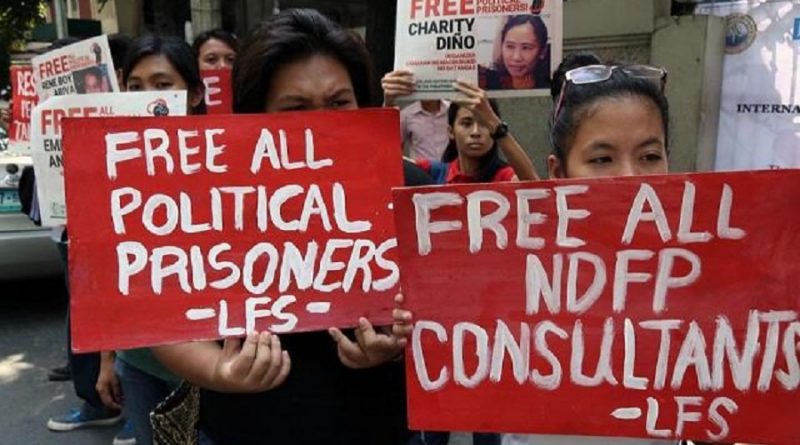 “In President Rodrigo Duterte’s first 100 days in office, there are positive developments foremost being his decisiveness, the resumption of peace talks and the release of the NDFP peace consultants. But there are also persisting challenges,” said Karapatan Secretary General Cristina Palabay.

1. One of President Duterte’s most significant achievements in his first 100 days in office is the resumption of formal peace talks with the National Democratic Front of the Philippines (NDFP) and his stated openness to a substantial and meaningful peace process with the Moro revolutionary groups.

The environment for the resumption of formal peacetalks between the GPH and the NDFP, long-stalled by the Arroyo and Aquino regimes, was further made enabling by the release on bail of eighteen (18) detained peace consultants of the NDFP and two other political prisoners to participate in the rounds of talks in Oslo, Norway.

The GPH and NDFP peace panels are scheduled to exchange drafts of a Comprehensive Agreement on Socio-Economic Reforms (CASER), a key agreement which is seen as the heart and soul of issues in the continuing armed conflict in the Philippines. The panels are also expected to discuss the release of political prisoners on humanitarian grounds, and all others through an amnesty proclamation.

Karapatan reiterates its unequivocal call to the Duterte administration for the immediate release of ALL political prisoners through a general amnesty.

2. The GPH declaration of unilateral ceasefire, an initial positive outcome in the peace talks, and verbal pronouncements by Pres. Duterte were key to the decision of the Lumad evacuees to return home.

The displaced lumad in Lianga, Surigao del Sur also got strong international and national support in their campaign for justice. The massacre of their leaders and teacher, Datu Juvello Sinzo, Dionel Campos and Lumad school executive Emerito Samarca led to the massive evacuation of lumad residents to the Tandag Sports complex. A year later, progressive organizations secured the Surigao del Sur evacuees in their trek back to their homes and schools. The internally displaced lumad staying at the UCCP Haran in Davao City have yet to return home due to continuing AFP presence in their communities.

3. The Justice Department’s withdrawal of charges against activists and human rights defenders in Mindanao is also a welcome development. Under the Aquino administration, trumped-up charges of kidnapping, serious illegal detention and human trafficking were filed to harass advocates and activists who supported the lumad evacuees in the UCCP-Haran compound in Davao City.

4. Duterte’s pronouncements indicate that government-backed paramilitary groups like Alamara and Magahat-Bagani, among many others, are supported, armed and funded by the government. He has threatened to disband and disarm them after reports of ceasefire violations were reported in media.

5. Duterte’s critique of US military presence in the Philippines and the US government’s hypocrisy insofar as human rights is concerned resonates with all patriotic Filipinos and peoples who are at the receiving end of US interventionist wars and plunder in underdeveloped countries. US foreign military aid to the AFP and the previous regimes have fuelled counter-insurgency programs such as Oplan Bayanihan victimizing thousands of Filipinos.

1. Despite the GPH declared unilateral ceasefire with the Communist Party of the Philippines-New People’s Army-NDFP, the implementation of Oplan Bayanihan continues, in the guise of civil-military operations and ‘peace and development programs’ by the AFP. Civilians continue to be targetted in the AFP’s mad attempt to employ deception and military solution to the armed conflict and to safeguard interests of large-scale mining and agricultural corporations raking in profits for foreign and local big business.

Rights violations perpetrated under Oplan Bayanihan continue. During the 100 days, Karapatan documented at least 16 victims of political killings, 16 frustrated killings, two cases of torture, and nine victims of illegal arrest and detention. Most of the victims of political killings were from the peasantry and indigenous peoples. They were killed defending their land and ancestral domain. Among these are the massacres of farmers in Laur, Nueva Ecija and in Sumilao, Bukidnon.

2. The filing of trumped-up charges against activists and the criminalization of political acts still continue. Lumad teacher-researcher Amelia Pond was charged with double murder and frustrated murder; while peace advocate John Maniquez with illegal possession of firearms during Duterte’s first 100 days.

The President declared a state of national emergency after the bombing in Davao City where civilians were killed. Karapatan remains vigilant on possible adverse impact on civil and political rights, especially those of the Moro people who might be victims of warrantless arrest and illegal detention.

3. Justice remains elusive in the cases of human rights violations which were committed as far back as in the Arroyo and Aquino regimes. Perpetrators of human rights violations are yet to be arrested and punished, despite warrants of arrests and solid evidence against them. Examples are the perpetrators of the Lianga massacre, the murderers of Fernando Baldomero, Romeo Capalla, Fr. Fausto Tentorio, Leonard Co, Juvy Capion and her two children, and many others.

5. Martial law victims and their families are disgusted with the utter failure of the Aquino-appointed Claims Board to indemnify them, despite more than three years of the Martial Law Victims Reparations Act. Duterte’s proposal for a hero’s burial for the dictator Ferdinand Marcos was also met with strong opposition by the ML victims and their relatives.

6. The rapid rise in the incidence of drug-related killings marred the first 100 days of Duterte’s presidency. Purely law enforcement actions against suspected drug users and pushers are done with disregard for their right to life and to due process. More of the victims are from the vulnerable and marginalized sectors of Philippine society.

Karapatan reiterates that drug-related killings should be stopped, due process should be resorted to and justice should be rendered the innocent victims.  The drug menace can be eliminated without curtailing the basic rights of the people, especially of the poor. It is through solving the basic problems of Philippine society and upholding economic, political and socio-cultural rights that the drug problem can be fully and comprehensively addressed.

“The struggle for meaningful and thoroughgoing change continues, as we continue to uphold and assert people’s rights under the Duterte administration and beyond,” Palabay concluded.