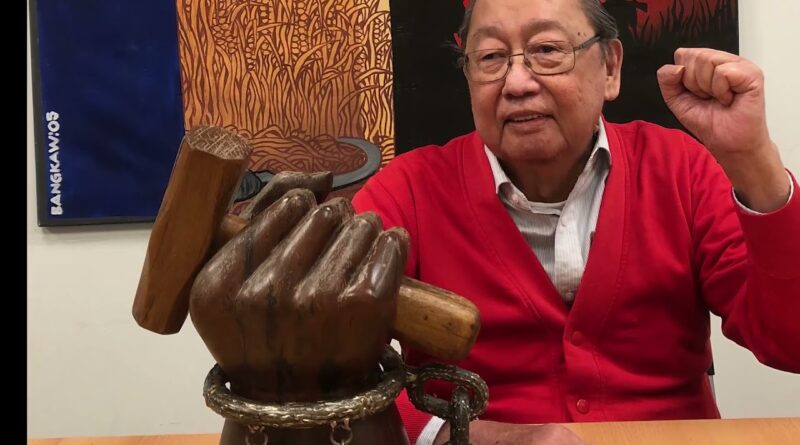 We are all profoundly saddened by the passing away of Kasamang Rey Paz Contreras. But we are consoled by the fact that he lived a full life of meaningful service to the people by committing himself to their revolutionary struggle for national and and social liberation, propagating social realism and people’s art and creating unique sculptures of great artistic merit.

We are gathered today to honor Kasamang Rey and celebrate his life of service and his great artistic achievements. He accomplished all of these by living and working with the workers and other urban poor in Tayuman and gathering here the material for his creative work. He also went to various provinces and stayed with the poor peasants, especially the indigenous people, to promote community-based art and gather local materials for his own creative work.

Ka Rey reached the peak of his artistic achievement by living with the urban and rural poor and by uniquely picking up and using as his material urban refuse, rural driftwood, ethnic and environmental materials as artistic media and infusing them with the spirit of rising above the squalor of mass poverty and fighting for national and social liberation against the conditions of exploitation and oppression.

Professors of aesthetics, art critics and artistic colleagues have acclaimed the great works of Ka Rey that have put him in the pantheon and company of his greatest predecessors among Filipino sculptors. And many more people can attest to his concern and warmth as a comrade and friend and express admiration for his work in promoting people’s art and community-based art and for his own sculptural works that they have seen.

In my case, I am exceedingly proud and happy to be gifted with this beautiful sculpture of the worker’s fist holding a hammer, which I see daily in my home. The inscription reads as follows: Specially designed and sculpted by the Filipino ethnic-inspired sculptor Rey Paz Contreras, this art work is the 70th birthday gift of Kilusang Mayo Uno (KMU) to Jose Maria Sison, the beloved founding chair of the Communist Party of the Philippines (CPP).

My spirit is likewise uplifted whenever I go to the NDFP International Office because I see this sculpture of a peasant woman, with the following inscription: Designed and crafted by Rey Paz Contreras from discarded “travieza” century-old railroad ties made of molave and other retrieved hardwood. The sculptor supports the effort to conserve Philippine forests. He has sculpted from drift wood the torch of the struggle and tokens of comradeship for Fidel Agcaoili, Luis Jalandoni and myself.

Many have shared with me the joy of appreciating these works of art. And I am sure that many other people have seen and admired more his works in the care of institutions and families in Philippines. To know more about his works and the serious evaluation of these, I have used the google search to see the images of his wide-ranging works and I have read first Alice Guerrero Guillermo’s appreciation of these works among so many evaluations already written by various authors.

I agree that Ka Rey Paz Contreras is a great sculptor and a great artist in the tradition of social realism and people’s art. In serving the people and creating his great works, he acted as a cultural cadre of the the people’s democratic revolution and he lived, associated and worked with the cultural cadres of the revolution and with the oppressed and exploited people.

He trained young sculptors to create art from the social and cultural conditions, demands and aspirations of the people. And he leaves us beautiful memories of his warm comradeship and his artistic works as his legacy and as our treasure to cherish. These keep him alive in out hearts and minds and inspire us to be with the the toiling masses and together with them fight for national and social liberation.