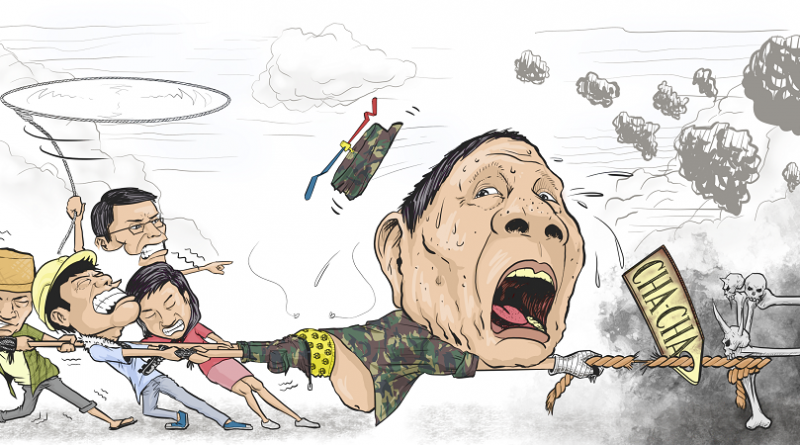 Like wildfire, the united front aiming to end the puppet, fascist, and oppressive regime of Rodrigo Duterte is rapidly spreading. His relentless attacks are uniting the ranks of almost all democratic sectors in the fight against his tyrannical rule.

His ostensible plots to grab power and extend his term are rousing more and more people to stand up and act. The opening of Congress this Monday is an opportunity for the people to demonstrate the broadening ranks of resistance.

At the forefront of this movement are workers, semi-proletariat and farmers, together with national minorities – the social classes that bear the brunt of Duterte’s machinations. On their side stand the youth, professionals, church people, small businessmen, former officials of the government, and the media – sectors that are being continually attacked and whose rights are persistently violated.

Recently, Duterte’s political rivals have openly joined forces with this movement. They are rigorously preparing to challenge his rule, resist his schemes, and confront him in political struggles until next year’s elections.

In just two years, the people have grown utterly disgusted with Duterte, and his regime has become extremely isolated. He has implemented the most shameless neoliberal schemes that have aggravated the people’s welfare and livelihood. His triple wars of death and destruction have induced unprecedented damage. The stench of corruption and criminality reeking from his family and police and military henchmen have reached nauseating levels. He has repeatedly displayed his puppetry to US imperialism, while brazenly selling off the nation’s territory to China for multibillion dollar loans to line his pockets. His foul mouth reveals his hatred of women and the poor. His promises of progress and change have all become but a fading echo.

Under Duterte’s reign, the ruling system’s political crisis has exacerbated. The fissures among the ranks of the ruling class has deepened because of his repeated attempts to establish a fascist dictatorship and consolidate state power. Despite his posturing and ceaseless brandishing of violence, he has so far failed in his legal and extralegal attempts. His first attempt to declare a “revolutionary government” and install himself as overlord by the end of 2017 conked out flagrantly. By January, his attempt to call for a constituent assembly or con-ass to amend the constitution and establish the federal form of government also failed.With the scheduled opening of Congress, Duterte is again set on railroading his fake federalism through con-ass. However, even at the onset, majority of senators have expressed their vehement opposition to this scheme. Even more are opposed to the attached “no-el” scenario (no election or cancellation of 2019 polls) being floated by his chief puppet in Congress. He vainly hopes to placate the people’s wrath by repeatedly declaring his plan to resign once the new constitution is ratified. No one is falling for his cheap tricks anymore.

In the coming weeks and months, the contradictions between Duterte and the united anti-Duterte front are set to intensify. Factional strife among ranks of reactionary forces will surely worsen. And the people’s movement will undoubtedly strengthen and gain ground. These contradictions and struggles will further weaken Duterte’s already weak control over the state. While his power weakens, it is certain that his attacks against various classes, sectors and groups that are hindering his fascist ambition will escalate. He is set to use his regime’s terror-tagging campaign against the Communist Party of the Philippines and the New People’s Army (NPA) to justify the declaration of martial law nationwide.

In the face of all this, it has become more urgent task for revolutionary forces to unite and mobilize the broadest sections of society to oust Duterte. Enjoin all classes and sectors that Duterte has trampled upon. Reach out and mobilize the Moro people. Let the disadvantaged politicians and officials to take part in resisting Duterte’s one-man rule ambition. Reach out as well to elements and officials of the Armed Forces of the Philippines (AFP) and the Philippine National Police who are disgruntled over Duterte’s criminal reign.

Ceaselessly expose and fight the Duterte regime’s fascism, puppetry, rottenness, corruption and criminality. Strengthen the people’s resolve to fight. Duterte’s reign of terror has permeated in the whole nation, especially in the countryside. His “Oplan Kapayapaan” needs to be unmasked and fought, while at the same time stepping up the fight against martial law in Mindanao.

Strengthen and broaden the mobilization of basic and democratic classes. They are the most determined to see the end of this regime that has done nothing but persecute, oppress, and inflict violence against them. Launch and mount more workers strikes and protest actions across the country, like those in the National Capital Region, Southern Tagalog, Central Luzon and Southern Mindanao. Gather the widespread wrath of the poverty-stricken victims of the “war against drugs” and the abusive “anti-vagrancy” campaign. Unite the urban toiling masses in the fight against contractualization, for wage increase, free public services and affordable housing.

Fortify the united struggle of peasants for genuine land reform and the national minorities’ defense of their ancestral lands. Relentlessly expose and oppose the harsh fascist attacks against them, especially in barrios occupied by the AFP’s fascist troops. Condemn the attacks against their schools and the military’s scheme of forcing them to surrender as NPA combatants. Demand the immediate pull-out of military troops in their areas. Frustrate the regime’s plot of using them as pawns in the sham localized peace talks.

Broaden and further strengthen the NPA. Launch solid tactical offensives and widespread military actions to inflict heavy blows against the enemy and make him suffer a thousand wounds. Cause the AFP to overstretch its forces through widespread armed offensives of the NPA across the nation and by applying guerilla war tactics.

Target the worst of the fascist units of the AFP, especially “peace and development teams” (PDT) which the AFP has deployed in barrios to sow terror under the banner of “peace.” Strike against the destructive operations of big foreign and local mining companies and commercial plantations, the owners of which are part of the main financiers of the regime’s fascist campaigns.

In the countryside and in the cities, strengthen all committees, sections, and branches of the Party at all levels and in all aspects. Ensure that the Party is solid, broad, and deeply rooted among the masses to effectively lead their struggle to end the US-Duterte regime and carry forward the people’s democratic revolution.