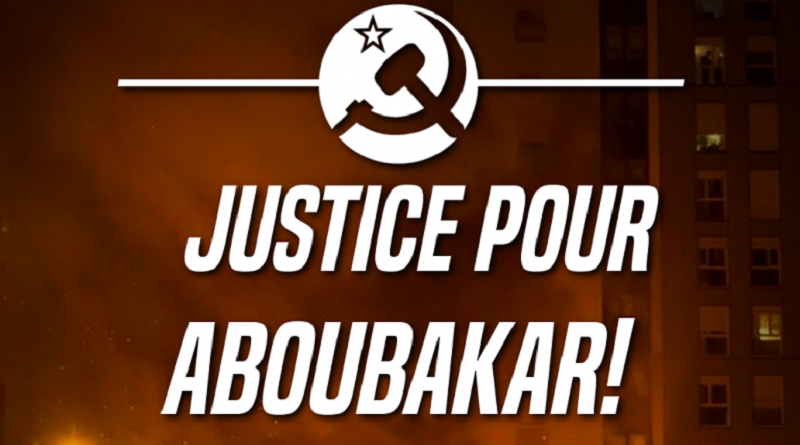 On Tuesday, July 3, Aboubakar, a young man from the working class neighborhood of Breil in Nantes was shot dead by a police officer. Because he was wanted, the cop thought he had the right to shoot him. Since then, their hierarchy has mounted a defense accusing the young man of putting the life of a cop in danger, which would justify the use of a weapon. Avalanches of testimonies from residents of Breil and even photos and videos evidences come to expose the lies of the police.

That same evening, despite the despicable attitude of the police, who did not even respect the dignity of the family, the youths went out on the street and attacked the police. Deployments of cops and gendarmes were urgently sent for clashes that lasted all night. Today, these anti-riot repression devices have not ceased, the state reacts on the contrary by intensifying them.

Many buildings were attacked, such as the employment center or the local temporary agency. To set up barricades, the young people burned cars and used everything they could find.

Last night, in the north of Paris, in the district of birth of the killed youth, there were also revolts. There is no justification for killing a proletarian and trampling on the dignity of the masses. Neither mafia crimes poisoning everyday life, nor tensions between neighborhoods. Summer is still the season of the most daily, abject and explosive police violence, and this assassination proves that 2018 is no exception. This crime police is in the series of numerous police killings that are increasing every year: it is a racist crime, a crime against the masses.

In these situations, as 2 years after the assassination of Adama Traoré (and since then, the detention and convictions of several members of his family, as Yacouba relaxed only July 3 this year after more than 450 days of deprivation of liberty), or as in 2017 when the names of Theo Luhaka, Shaoyo Liu, Curtis and all other victims of police violence resounded in neighborhood struggles, the Maoists still support the outright rebellion of young people. We call, as we had already done last year, to join #MarcheADAMA July 21, 2018 in Beaumont sur Oise.

In 2005, during the Revolt of the suburbs there was an extension to the whole country. The same evening that Zyed and Bouna died because of the cops, the revolt broke out in Clichy-sous-Bois and Montfermeil. After a few days, it extended to the Seine-St-Denis, then to the entire territory. Wherever the revolt broke out, it was in the working class neighborhoods, mostly located in the suburbs of urban centers, where capitalist exploitation and racist oppression are at their peak. 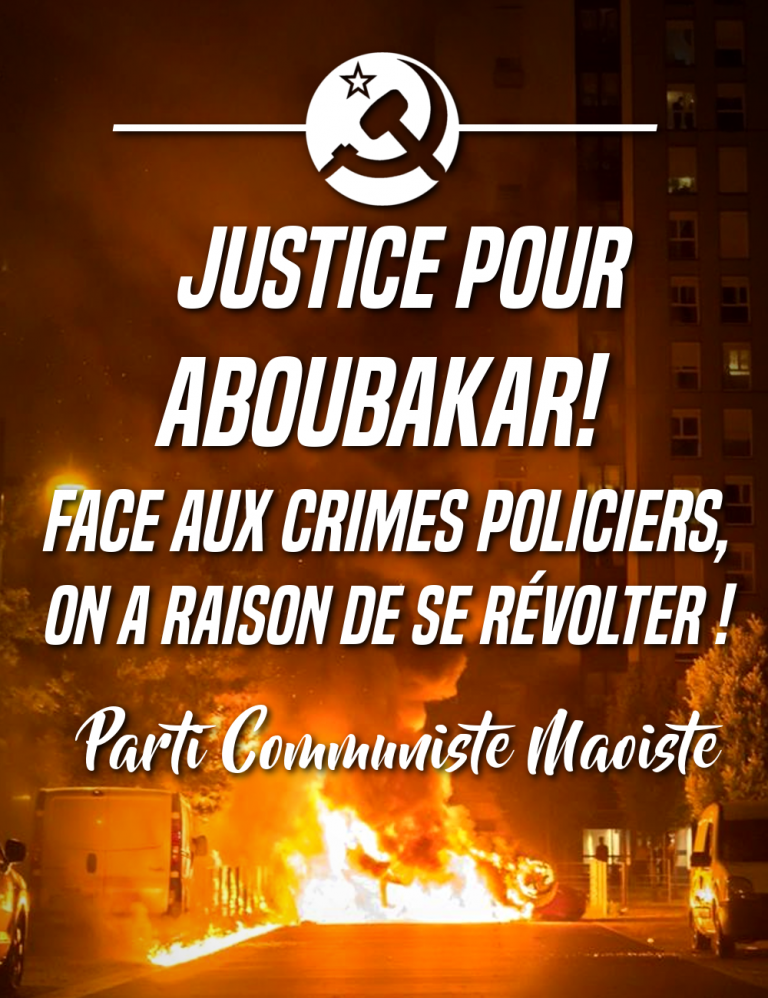 “Where there is oppression, there is resistance.” This is what President Mao taught us and what the masses are showing us with every attack they face, be it from the cops, the government or the bosses. And we must see that in France, the working class neighborhoods are the places where there is the most oppression and the factories and businesses where there is the most exploitation. We can not disconnect the two, when we talk about working class neighborhoods, because 40% of the working population is strictly working (not counting the unemployed workers) and about 35% is employed (mainly administrative employees and in the service to persons ). Unemployment is 2.5 times higher than the rest of the country, reaching up to 45% among young people. Households are less motorized than elsewhere which is penalizing for access to employment, precarious forms of employment (part-time, fixed-term contracts, subsidized jobs, temporary work) are more important than in the rest of the country. The income per household is 1200 € lower than the whole territory. The poverty rate is 3 times higher. And these are just numbers, which can not translate reality. Because if the question of work is essential, we must also see the aspects of daily oppression. First, there is housing. For many years, the bourgeoisie has been driving out the proletarians from the city centers in order to carry out juivy real estate operations. This is why most of the popular districts of France are in the suburbs of the city centers.

The economic and housing difficulties are particularly important for women in lower-income neighborhoods. There are more single-parent families (90% of whom are women) and they are particularly affected by unemployment (50%). When they manage to find a job, it is mostly in very precarious conditions, with staggered hours, part time, and so on. And as in the rest of society, they suffer an additional oppression, that of patriarchy that places women in a dominated position in society.

In working class neighborhoods, there is also racist oppression which is central and comes directly from the colonial and imperialist character of France. Immigrants or people of immigrant origin are more numerous than in the rest of the country (2.5 times more). There is therefore additional discrimination, which is sometimes even geographical. How many inhabitants of working class neighborhoods hide their real address on the CV? Otherwise, we know that the CV will not even be read.

With the economic difficulties and racism comes the police harassment that turns into police crimes. In neighborhoods, police harassment is a daily occurrence. Racial profiling, insults, provocations, arbitrary arrests, false accusations… The cops are happy to round off to make ends meets with the outrages they stick to everything! How many have fallen under police bullets during a hunt? And the police fare each time, supported by the government and its ministers, with the help of the bourgeois Justice. And of course thanks to it rotten union, Alliance (among others). Police harassment and their crimes, that’s the real face of the state in the neighborhoods. So, when we come from a popular neighborhood, what does society have to offer us? In what future can we project ourselves? Clearly, in the context of this society, it is very thin! Revolt is therefore the first and most legitimate answer.

As President Gonzalo said: “The masses are the light of the world … they are the fiber, the inexhaustible palpitation of history… When they speak everything trembles, the order staggers, the highest peaks lower, the stars take another direction, because the masses do and can all”

The struggles against police violence express the rejection of the violence of the bourgeois state in its most concrete form: the attempt to put the young working class neighborhoods at a disadvantage by repeated beatings, assassinations, rape, intimidation and humiliation. This specific struggle has a recurrent and massive character in the French state where police crimes are far from being “smudges”. The Maoist Communist Party, armed with Marxism-Leninism-Maoism, built the three revolutionary instruments of the Party, the Combatant Force and the Front to organize the popular masses and all their struggles for victory. It is only through the revolution that the end of the violence can be accomplished, because the direction of the repression comes directly from the power of the bourgeois state. It is therefore through its overthrow, obtained by the mobilization of the masses, that police violence can be eliminated.

Moreover, if domestic violence is constant, we must link our struggles against the French State to all places where it has a police or military presence that gives it a repressive power: colonies, but also semi-colonies, that is to say, the many countries where the French imperialists direct for their profit the economic and political state in alliance with compradores of all kinds. This is all the more echoing as this police assassination takes place just when Macron is visiting Nigeria where he professes, like last year in Burkina Faso, his imperialist “advice” to the entire African continent! To give an idea of ​​imperialism in Nigeria, let us recall that the Nigerian subsidiary of Lafarge, the French cement producer, as well as the local branch of Nestlé, a Swiss multinational, are among the 10 largest publicly traded companies in the country, which they loot. always the resources.

In the face of police killings, we are always right to revolt!

Down with the French imperialist state here as in the whole world!Aboub

All manifest on July 21 for Aboubakar and victims of police violence!