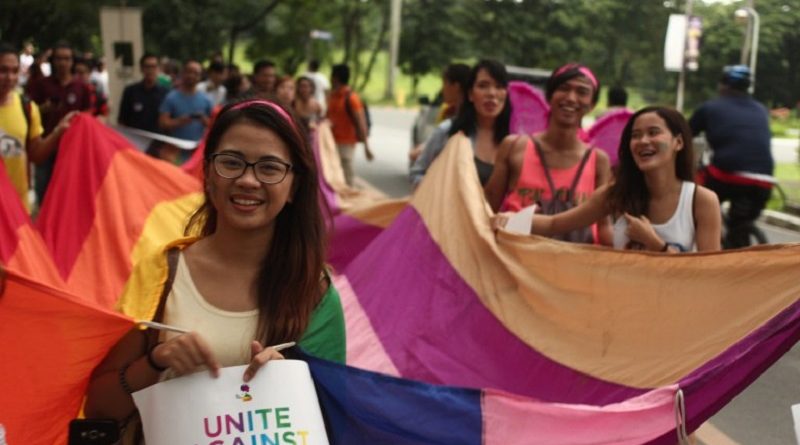 “The LGBT struggle is not far from the class struggles of the Filipino.”

MANILA – Some 1,000 people from different sectors gathered at the University of the Philippines (UP) Diliman on Sept. 16, donning the colors of the rainbow as they marched around campus to forward the concerns of the special sector of lesbian, gay, bisexual, transgender (LGBT) in the now-official 2016 UP Pride March.

Organized by UP Diliman University Student Council (USC), this year’s theme was “Live for love.” Several student groups joined the march, which culminated a week-long series of events that raised awareness on LGBT issues.

For this year’s pride march, USC chairperson Bryle Leaño dressed in full drag, as he marched with a wig and trotted on high heels.

Traditionally, the standard ROYGBIV spectrum dominate pride marches, but progressive groups carried signs of mostly red, and called out the issues of different sectors as well. This highlighted how the LGBT fight for equal rights and against discrimination is part of the overall struggle for socio-economic and political changes.

The progressives called for justice for Jennifer Laude, a transgender Filipina killed in 2014 by a US serviceman who participated in Ph-US joint military exercises under the Visiting Forces Agreement (VFA). The groups cited the killing as one of the basis for the government to revoke treaties with the United States, such as VFA and the Enhanced Defense Cooperation Agreement.

“You always have to go back to the basic masses,” Leaño said in Filipino. “There, you will also realize the struggles of the LGBT. There are peasants who are LGBT who have no land, while there are also workers who don’t earn enough.”

Leaño, in spite of sore feet, did not stop walking on heels, as the march traversed the academic oval, chanting for the calls of sectors with an LGBT twist.

‘Not all Muslims believe homosexuality is forbidden’

A few meters from the front was a small group of less than 10, wearing an all-white attire and traditional Muslim clothes and accessories.

The small group was part of the international organization Muslims for Progressive Values (MPV), which advocates “traditional Qur’anic values of social justice and equality for all, for the 21st century.”

One of them, Pete Sengson, who wore a taqiyah (skullcap), told Bulatlat in Filipino: “We Muslims share something with the LGBT sector, and that, is we are victims of discrimination.”

Sengson said they wanted to show that not all Muslims believed homosexuality is haram (forbidden by Allah). The MPV said in a statement that they stand firmly against laws in Muslim-majority countries that criminalize homosexuality.

“For now, we are starting with visibility, we are showing there are also LGBT muslims, and we exist,” Sengson said. “There are also alternative interpretations of the Qu’ran, highlighting the inclusivity of the religion.”

‘The first LGBT fraternity in the Philippines and in Asia’

A fraternity whose members belonged to the LGBT also joined the parade. The Alpha Nu fraternity dubbed themselves as “the first LGBT fraternity in the Philippines and in Asia.”

UP Student Kenneth Cadiang is Prime Brother Exemplar of the fraternity, the highest-ranking brother. He said the fraternity stands for three core values: gender sensitivity, non-violence and HIV awareness.

Aside from the inter-sectional character of the LGBT struggle, they are also fighting for a new breed of fraternity, above the “traditional” notion of fraternities.

Cadiang said the stereotype “machismo” in fraternities does not apply in Alpha Nu. “You can empower the term ‘fraternity’ into something progressive,” Cadiang said in Filipino.

Historically, fraternities were underground organizations which went against backward ideas, Cadiang said. Back then, the underground Greek organizations fought for women’s rights, and now they fight for the rights of the LGBT sector.

Alpha NU members had rainbows painted on their face, and the fraternity’s initials on their cheeks. Among their calls urge the LGBT to rise above the “mainstream” issues of the LGBT.
Cadiang said the LGBT joins the call to end contractualization and “endo,” for land distribution for peasants, and free education for the youth, which he said all reflect state abandonment.

He said “popular” issues of the LGBT focus on gender, tolerance and the passage of an anti-discrimination act. However, the LGBT are still mainly affected by problems based on their economic standing.

“The LGBT are not just those in the city and the academe who are capable of understanding theory,” he said in Filipino. “They are in the farmlands with landless farmers, in factories with abused workers, in schools with students who cannot study, and parents without job security.”

Whether one is in a wig, dress and heels, a taqiyah or hijab, or part of a brotherhood or sisterhood, one thing is certain: the struggle of the LGBT is but another of their struggles as members of their own social classes.