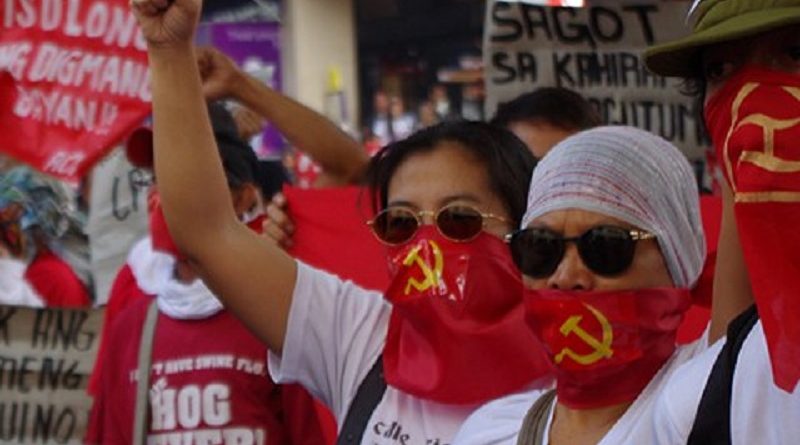 La Cause du Peuple have organized a meeting called “Struggle and Revolution in the Philippines: a travel report of an activist” Saturday, November 12 at 16h at the ACTIT – 54 rue Hauteville, 75010 Paris.

There are countries which are not often heard about … What do you know of the Philippines? When the TV speaks of it, it’s only to count the dead after a typhoon or perhaps more recently you have heard of provocations of the new president. Yet the Philippines is a country shaken by a strong social movement, this is also where we find one of the most advanced revolutionary movement in the world today! However the major media are careful to not talk about it and have a complete silence on this movement that lasted for more than 40 years and is far from dying out. It’s the same in regards to India where the revolutionary movement shows day by day more force in one of the most populous countries on the planet.

This is why an activist of la Cause du Peuple have decided to stay in the Philippines last summer in order to discover the struggles and the great revolution that leads the Filipino people. Struggles that affect all sectors of the society: peasants, workers, women, students … and is close to the revolutionary movement led by the Communist Party of the Philippines leading a People’s Protracted War with its armed wing the New People’s Army against the reactionary state and the imperialists who plunder the resources of the Philippines and exploit the Filipino people.

To discover the great revolutionary movement fighting against imperialism, bureaucrat capitalism and feudalism, the Cause du Peuple invites you to this meeting of Saturday, November 12 ! On the same occasion will be organized a collection of donations to send medical supplies for mass clinics set up by the revolutionaries. 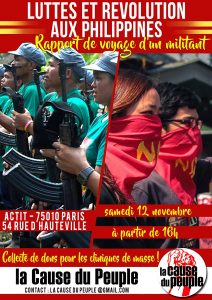