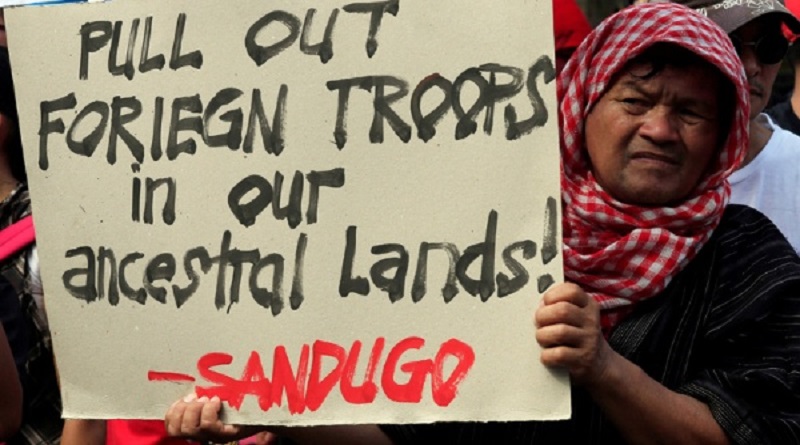 Duterte has castigated the U.S. for not apologizing for its murder of 1.4 million Filipinos and for continuing the same aggression in various countries.

The ceasefire agreement has been carried out through simultaneous unilateral ceasefire orders by the GRP to the Armed Forces of the Philippines (AFP), the Philippine National Police (PNP) and paramilitary forces; and by the CPP Central Committee to the New People’s Army and the people’s militia.

So far, this is the longest running ceasefire between the GRP and the NDFP in the 47-year history of revolutionary civil war in the Philippines. The unilateral ceasefire orders are expected to be transformed into a more stable bilateral or joint ceasefire upon the fulfillment of certain requirements, chief of which is the amnesty and release of more than 500 political prisoners accumulated by the Arroyo and the Aquino regimes.

In the second round of formal talks, from October 6-10, the GRP negotiating panel assured its NDFP counterpart that the accomplished release of 22 political consultants of the NDFP from prison would be followed by the release of 200 more prisoners who are sickly, elderly, women and overly long in prison before the third round of formal talks in the third week of January 2017.

The NDFP negotiating panel firmly reminded its GRP counterpart that the release is in compliance with the Comprehensive Agreement on Respect for Human Rights and International Humanitarian Law (CARHRIHL) that all political prisoners must be released immediately because they have been unjustly imprisoned on trumped up charges of common crimes.

The NDFP negotiating panel also reminded the GRP side that President Duterte promised to effect the release of political prisoners through an amnesty proclamation in order to avoid unnecessary delays in their release and let them benefit from a clean legal slate after a long period of unjust incarceration. The people’s demand for the release of all the political prisoners has been resounding for several decades already.

In fact, President Duterte’s promise to amnesty and release all the political prisoners has been a great incentive to the NDFP to agree to the resumption and acceleration of the peace negotiations and to a ceasefire through unilateral ceasefire orders that can lead to a more stable bilateral or joint ceasefire agreement.

The NDFP has become very open to forging a peace agreement with the GRP under President Duterte because of his avowals of opposing U.S. imperialism and the domestic oligarchy of big compradors and landlords and standing up as the first Left president of the Philippines who is determined to uphold national independence, expand democracy for the people, carry out national industrialization and genuine land reform, and realize an independent foreign policy.

The NDFP is ready to cooperate with the Duterte government through the peace negotiations in adopting and implementing social, economic and political reforms and is ready to participate in an inclusive government of national unity, peace and development and in a system of national defense against any combination of U.S. aggression and local reactionary threats.

The NDFP is well-forewarned by the example of the Colombia’s FARC which accepted promises of concessions from the Santos government but which agreed to admit criminal liabilities and dissolve the people’s army even before the implementation of reforms. Worst of all, it agreed to submit its peace agreement with the Santos government to a referendum which was obviously a device of entrapment and frustration of everything promised as beneficial to the revolutionary people and forces.

While President Duterte himself has tried to inspire hope for change among the people, there are elements in his own government who wish to impose capitulation and pacification on the revolutionary people and forces and who wish to prolong the already discredited bankrupt US-dictated neoliberal economic policy and perpetuate foreign and feudal domination in the Philippines.

At the same time there are patriotic and progressive elements in positions in the government who oppose the pro-U.S. puppets and reactionaries. Duterte himself is making sure that the mass movement continue to support him. Thus, he has organized the Kilusan sa Pagbabago (Movement for Change) that is ready to cooperate with the long-standing mass movement of patriotic and progressive forces.

A broad range of the Filipino people have applauded President Duterte’s approaches to China, Russia and the rest of the BRICS bloc for diplomatic and economic relations in recognition of a multipolar world and veering away from U.S. hegemonism and the U.S. strategic pivot towards East Asia. Duterte has gone as far as castigating the United States for having never apologized for its mass murder of 1.4 million Filipinos from 1899 to 1914 and for continuing the same aggression and murderous policy in various countries to the present time.

The revolutionary forces and people within the broad alliance of the NDFP and under CPP leadership continue to support the patriotic and progressive pronouncements and acts of the Duterte government, make proposals for fundamental reforms and challenge Duterte to further prove and substantiate his general statements against US imperialism and the domestic oligarchs.