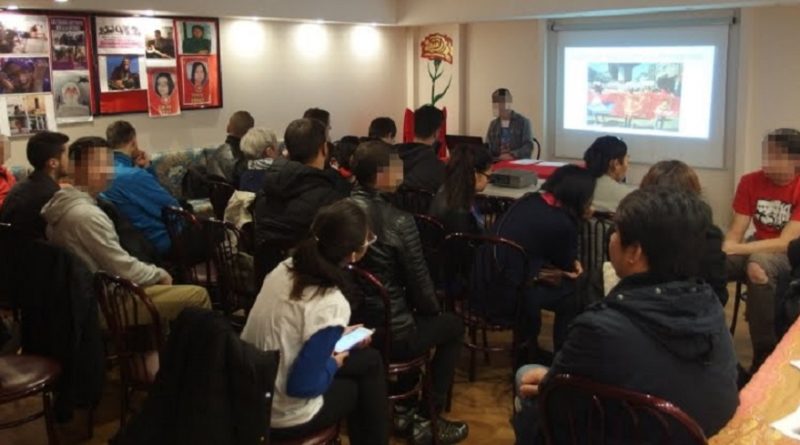 Saturday, November 13, la Cause du Peuple organized a meeting on the situation of the struggles and the revolution in the Philippines presented by one of its militants who went there last summer.

In the beginning the comrade briefly presented the history of the Philippines since the Spanish colonization until today. He then exposed the situation in the cities by showing the activity of various progressive organizations: the struggle of the urban poor communities, the struggle of the workers, the struggle of the students … Finally, he showed the activity of revolutionaries in the rural areas and in particular the medical campaigns they set up. A collect of donation was made to send medical supplies to the mass clinics set up in the poorer parts of the Philippines by the revolutionaries.

The meeting continued with the intervention of the CRI Rouge (International Red Collective for the Defense of Revolutionary Prisoners), which you will find below.

Members of the NPSP association (Nagkakaisang Pilipino Sa Pransya – The Philippines United in France) then performed the song “On Potok”, a dumagat song (national minority on Mindoro Island) about the situation of indigenous peoples in the Philippines. The Chairman of the NPSP then greet the meeting.

A Filipino comrade, political refugee in the Netherlands, concluded the meeting by calling for greater solidarity with the struggle of the Filipino people.

Intervention of the CRI Rouge:

Statement of the International Red Collective to support the People’s War in the Philippines and political prisoners and prisoners of war.

The situation today is characterized, on one hand, by a deep crisis in the economic, political system of imperialism and capitalism and, on the other hand, by a widespread offensive against nations, people and the international proletariat – it results in unprecedented plunder wars, an intensification of exploitation and the achievements of the peoples in fields as varied as those of health, education, labor law, basic freedoms are being questionned …

Faced with this, we are seeing a strengthening of struggles in all forms to stem this offensive – more and more long-term struggles and increased violence in confrontation with the power and its forces of repression. This ripost could for example be observed in France against the El Khomri law, or in Turkey against Erdogan, in the USA against the arrival of Trump to power, in Brazil for the defense of the landless peasants, or in recent days In Morocco to denounce the crimes of the regime. The revolt of the people thus spreads over the whole globe, but what very often lacks these movements to really shake the system that oppress them are the three instruments of the revolution, and in the first place an authentic communist party to transform these struggles into people’s wars in order to solve the question of the seizure of power by and for the proletariat.

This path, few countries in the world – such as India, for example – are in the process of carrying it, and among them the Philippines, where under the leadership of the Maoist Communist Party of the Philippines there is a long-term people’s war going on since 1969 (date of the constitution of the Party and of the New People’s Army).

This people’s war is considered the oldest in the world and is conducted under the slogan: “Revolution is a people’s right! “. This just war has already led to important advances in many fields and is guarantor of the construction of an alternative society.

On the other hand, there are also revolutionary fighters who, in this fierce struggle, are made prisoners and for whom we must also give our full support and solidarity: today 520 political prisoners and prisoners of war are in prison and with them five revolutionary leaders and it is the duty of all revolutionaries to work for the liberation of these comrades.

It is in this context that we, the International Red Collective, express our support for the Philippine revolution and our solidarity, and declare the following:

1. Our principled and unconditional solidarity with the Filipino people in their just and legitimate struggle for the realization of the new democratic revolution as the first stage in the construction of socialism and communism.

2. Our condemnation of the assassinations and kidnappings suffered by the Filipino people.

3. Our principled solidarity with the struggles of the Communist Party and the National Democratic Front.

4. Finally, we call for more support for our Filipino comrades in their struggles, to impose this right to make the Revolution and to liberate itself.

5. We demand the immediate and unconditional release of all political prisoners and prisoners of war.

Our greetings to the comrades who organize this activity to celebrate this historic event.

LONG LIVE THE INVINCIBLE PEOPLE’S WAR IN THE PHILIPPINES!

LONG LIVE THE COMMUNIST PARTY OF THE PHILIPPINES!

UNCONDITIONAL AND IMMEDIATE FREEDOM FOR POLITICAL PRISONERS AND PRISONERS OF WAR IN THE PHILIPPINES!

GLORY TO THE MARTYRS OF THE REVOLUTION IN THE PHILIPPINES!

DOWN WITH THE REACTION AND IMPERIALISM!