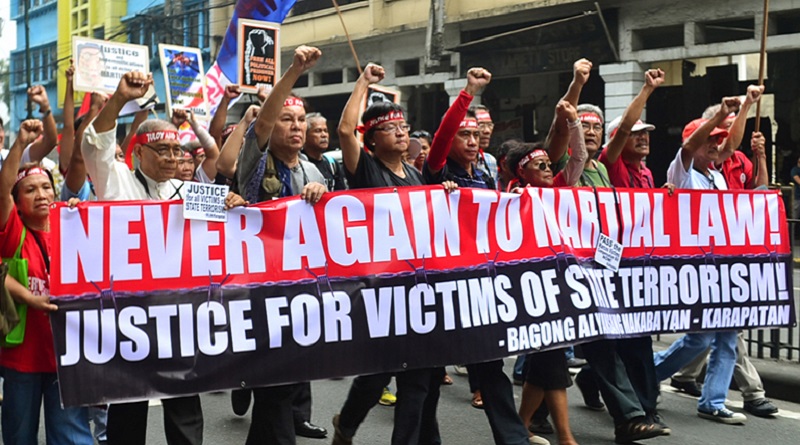 The Communist Party of the Philippines (CPP) joins the Filipino people in denouncing the Duterte government for having honored the erstwhile dictator Ferdinand Marcos as a hero with full military honors in a funeral carried out surreptitiously yesterday at the Libingan ng mga Bayani.

“In ordering his military honor guards to bear the tyrant’s casket in a hero’s funeral, Duterte exhibited gross disrespect and insensitivity to the Filipino people’s sufferings under the brutal martial law rule and to the martyrs and heroes of their epic resistance,” said the CPP.

“It was an act of great reversal of the historical judgement of the Filipino people against the US-Marcos dictatorship and a completion of the political resurrection of the Marcoses.”

“The CPP supports the national democratic organizations and various sections of society, especially the students and youth, in launching street protest actions to demonstrate their indignation and protests.”

“The CPP advises Duterte to reverse this historical wrong. If he refuses to heed the people’s outcry over the hero’s burial for Marcos, Duterte risks facing mounting protests and isolation.”

“Instead of paying tribute to Marcos, Duterte should support the people’s demand to hold Ferdinand Marcos, as well as Imelda and their children, accountable for the crimes of plunder and violations of the people’s civil and political rights,” said the CPP.

“By giving Marcos a hero’s burial, Duterte has succeeded in stoking the anger and rage of the victims of the US-Marcos dictatorship as well as of the younger generation of Filipinos who are highly conscious of the lessons of martial law and indignant of the innumerable crimes of the fascist tyrant,” pointed out the CPP.

“In ordering the AFP to give Marcos hero’s honors, Duterte is proving himself a rotten trapo (traditional politician) who has no qualms working with the worst of the bureaucrat capitalists and gives premium to paying political debt and political loyalties even to the detriment of the people’s aspirations for historical and social justice,” added the CPP.

Earlier, the CPP denounced the Supreme Court for its decision allowing Duterte to proceed with the hero’s burial for Marcos.

“The Filipino people advises Duterte to renounce Marcos-style rule,” said the CPP. “He must stop effusively praising Marcos’ mythic brilliance which makes him sound like a loyalist, and end making suggestions about reviving such hallmarks of Marcos’s martial law as the constabulary and the suspension of the writ of habeas corpus.”

“The people have not forgotten and they will not allow the resurrection of a strongman rule,” said the CPP.