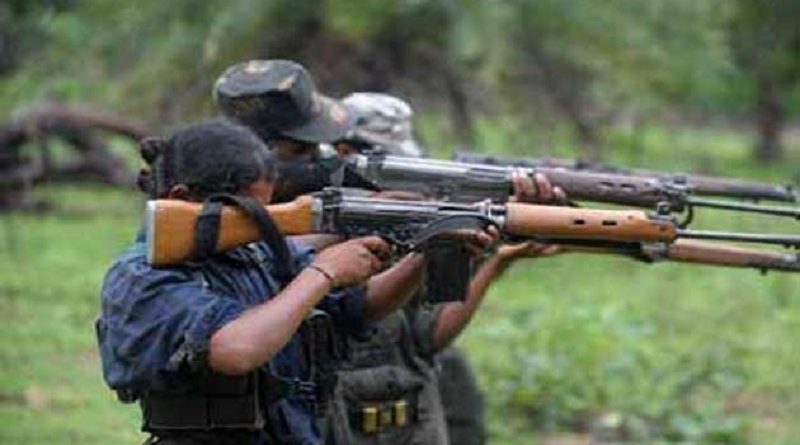 The AOB (Andhra-Odisha Border) Committee, a crucial military zone of the CPI (Maoist), which remained headless after the bloody encounter killings of its top leaders including Bakuri Venkataramana alias Ganesh on 24 October in Malkangiri, now has a woman as its chief.

Kakarala Madhavi, the new Secretary of the AOB Committee of the armed rebels will now call the shots at what is considered the last post of the Maoists. This post is a prestigious one amongst the group – it was earlier held by Maoist legends like Devanna and Azad.

Kakarala Madhavi, 34, is a native of Rajamahendravaram of East Godavari district of Andhra Pradesh, the same area where popular film star and MP Jayaprada hails from. Madhavi was the choice for commander in view of her experience in the region and also her rapport with the local tribals in the border district of Malkangiri.

Madhavi is the daughter of Kakarala Subba Rao, a veteran character theatre actor and a member of the Virasam (Viplava Rachayitala Sangham or Revolutionary Writers’ Association). There is confusion as to whether she is Padmakka or Radhakka, two daughters of Rao, who had both joined the People’s War Group (PWG) before it became the CPI (Maoist). “My daughters were addicted more to Left philosophy and Communist literature than me,” Subba Rao had said in an interview with a TV channel recently.

A college drop-out, Madhavi had joined the movement 10 years ago under the influence of her father’s active involvement in the Communist movement. In fact, she had also played a role in a drama on Lenin, staged by her father, who was a theatre artiste, writer and also a director. She had worked as a deputy commander, commander and also a member of zone committees, finally making it to the central committee now. She had worked not only in the Nallamala and Dandakaranya forests but also in Telangana, Odisha, Chhattisgarh, Jharkhand and also in some front organisations – cultural, farmers and youth wings of the CPI (Maoist).

Madhavi is perhaps the six or seventh woman top leader in the hierarchy as of now. Sources told Firstpost that an emergency meeting of the central committee of the Maoists held in the jungles of Dantewada in Chhattisgarh a few days ago had placed on record the contribution of the 31 slain rebels to Left wing extremism. Of the slain Maoists, 11 were women, including two deputy commanders.

The central committee also appointed another senior Maoist woman field operative Pothula Kalpana, 34, as the person in charge of military operations in the area. The Committee had justified the appointment of young women to key posts by saying that this move was to win the confidence of locals and tribals in the AOB region. The highest body of the CPI (Maoist) had said that internal lapses in guerrilla strategy had cost too many lives in the 24 October encounter. “Treachery, gross negligence and overconfidence” had led to the massacre at Janthi village in AOB, said a document of the central committee.

Lack of recruitment of educated activists as well as desertion of the movement by aged sick seniors had forced Maoists to recognise the value addition made by women cadres and elevate them in several key positions. “Maoists took the calculated risk as women cadres were more committed, duty conscious and loyal to party hierarchy than men cadres,” said former DGP of Andhra Pradesh Dinesh Reddy, during whose period the AP police struck terror in the Dandakaranya forests in Telangana.

After a series of police-driven media exposures on the plight of women cadres in Maoist groups in the 1990s, the central committee of the PWG had framed guidelines and mandatory approval by the committee for inducting cadres in armed dalam (group), front organisations, the People’s Guerrilla Land Army (PGLA) and also the special military commissions. At a time there were nearly 175-250 women members in the field and also in front organisations, but the number has now dwindled to less than 100, according to police. “Very few women – except those linked to top guns in Central Committee or those married to dalam commanders or dalam members – are continuing. There are no single women,” said a senior police official.

A major reason for teenage girls to join the dalams was to escape from the traditions of early marriage when they were in school or junior college. “I joined the dalam to escape from family pressure to marry and stop my education. Now everything is lost as I don’t have any studies either,” said 19-year-old girl Renuka, a Maoist rebel who met this writer in the 1990s in Karimnagar, Telangana. Two years later, she surrendered and returned home; went back again and was killed in a shootout.

A college drop-out, Madhavi had joined the movement 10 years ago under the influence of her father’s active involvement in the Communist movement

But things have now changed for women activists who are chosen to head crucial committees including intelligence, suicide strike teams and are also key contributors to policy decisions in dealing with the tribals and landless poor. The central committee had acknowledged the role of women cadres in a document released two years ago on how the Salwa Judum domination in Chhattisgarh was throttled and tribals – Khoyas and Kondadoras – were won back to their side.

Women have been an active part of war machinery of the CPI (Maoist) and its earlier avatar, the PWG. The number of women cadre has been on the rise since the late 1990s. Replying to a question in Parliament on 13 July, 2013, then Minister of State for Home Affairs, RPN Singh had said that 40 percent of Maoist cadre were women.

“I was motivated by the fiery, inspiring songs of a visiting Maoist squad sung in my village,” said V Sujata, a 20-year-old Dalit armed activist in the Sircilla belt of Karimnagar, in 2005. Local police had painted her as a “loose girl” and that jeopardised her family efforts to get her married off. She had taken to Maoism to escape from community penalty to the family.

In 2008, Sujata went back to her village as a deputy commander of a dalam and took revenge on the police and also other villagers who had maligned and harassed her. Her dalam had cut the hands and ears of her detractors. Sujata was however killed in an encounter in 2009 near AOB. “But that explains the real reason why teenagers wants to join the Maoist movement – they want to escape from age-old customs and ridiculous social ostracisation,” said Professor Hargopal, a civil rights activist of Telangana.

Changing roles of women in Maoism

Unlike Sujata, there were many others like Anupuram Anasuya, wife of Anupuram Komarayya, of the North Telangana Special Zone Committee (NTSZC) who went to jungles out of commitment, leaving her infant behind, and who died in a later encounter defending her husband and the movement. Similarly, Polam Bharathi, wife of Polam Sudharshan Reddy, joined the dalam, but quit after her husband was killed in an encounter. Many others like Nelakonda Rajitha alias Padmakka, an undergraduate, had married Sande Rajamouli (a Politburo member and chief of Central Military Commission) and was killed in an encounter in 2002. “Women joined the rebel fold and even went underground, living in exile, to escape from the exploitation of powerful people in the village,” says popular civil rights activist Kancha Ilaiah.

Most women activists like Nirmala (wife of Chandra Pulla Reddy) and Anuradha Ghandy (wife of Kobad Ghandy) were highly educated, urban ideologues and leaders. For instance, Anuradha Ghandy, a Sociology lecturer, had led the all-India women’s movement but died of cerebral malaria in the Dandakaranya jungles.

Police said girl cadets who wanted to become like Madhya Pradesh’s notorious ‘Bandit Queen’ Phoolan Devi, were used as decoys during raids and ambushes. They were also used as errand girls to collect funds, medicines, food from villages and also as personal couriers of the top leaders. While most men cadre ran away fearing the heavy firepower of security forces, women cadres remained on ground and returned fire and often helped the top cadres to escape even at the cost of their own lives. “In order to give women cadres a safe and secure career, the CC had always encouraged them to get married to the men of their choice in the armed units,” says another document of the CPI (Maoist).

The committee also invited women cadets with a minimum 3 years experience to visit Abuj Marh in Chhattisgarh once in two years to undergo special indoctrination and military training to prepare them for higher responsibilities, as many male cadres were deserting the movement due to sickness or family issues. “But the disturbances since the Green Hunt operation had put this exercise on hold,” said another police official.

Women activists have thus become the vanguard of the Maoist operations during the toughest situations. Nirmala Chatterjee, a leader of the Maoist Communist Centre and widow of Sagar Chatterjee, had led the Maoist attack on Chandrapura Railway Police station in West Bengal in 2005. In a recent document, Ganapathi alias Muppala Lakshman Rao, numero uno of the CPI (Maoist) had written – “Women activists, particularly from Dalit and tribal backgrounds, have been a main source of strength for the Maoist movement, and only the functional and organisational deficits of the movement had shortened their utility,” the document quotes.