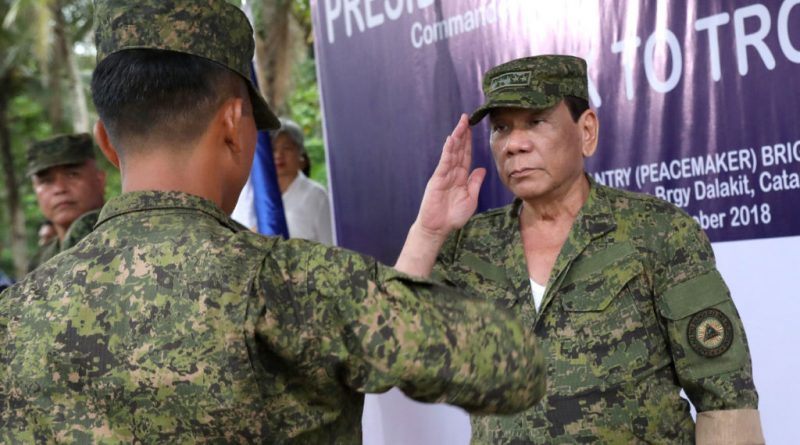 Without formal declaration, Duterte is already implementing nationwide martial law with the order today to deploy additional military troops and police to the Bicol region, Samar and Negros islands.

Duterte’s exercise of de facto martial law powers is based on the flimsy 2016 “declaration of a state of national emergency” to supposedly “suppress lawless violence.” However, it is clear that the order is a desperate attempt to stop the rising tide of peasant unrest and nationwide growth of the NPA.

This order will surely lead to the further worsening of the state of military and police abuses and attacks against democratic rights in these regions, especially against the peasant masses.

There is also a rising number of peasants killings, marked by the recent massacre of nine peasants in Sagay City in Negros by paramilitary forces attached to the AFP. Duterte has endorsed the massacre after ordering his men to shoot peasants asserting their rights to land.

Human rights abuses are also on the rise in Samar and the whole of Eastern Visayas where at least 10 battalions of AFP troops have been deployed. The people of Northern Samar towns of Lao-ang, Las Navas and Catubig are demanding a stop to the militarization of their barangays where the AFP are setting up detachments and carrying out combat operations.

Duterte’s deployment of more troops to suppress rising armed resistance and other forms of struggle is counter-productive and self-defeating. The aim is to use overwhelming force against the peasant masses and the guerrilla forces of the NPA.

However, by committing widespread abuses against the people and imposing martial law across the countryside, the AFP is succeeding only in rousing the people to take up arms and join the NPA.

Duterte’s orders to deploy more troops to Bicol, Negros and Samar stretches the limits of his militarist solution to the rising armed resistance of the Filipino people. Since early this year, Duterte has already deployed his new ten battalions of combat troops across the country, four of which are in Mindanao.

He has no more troops to deploy, unless he reduces the number of soldiers deployed in other regions or spends even more public funds to form additional combat units.

Duterte cannot afford to reduce significantly the number of troops in Mindanao, both in the NPA and Moro areas. Duterte and AFP officials endlessly brag about thousands of “NPA surrenderees” but know these are merely for psywar effect. In fact, many of the so-called “surrenderees” are seeking the NPA to report military abuses and demand justice.

Duterte’s combat troops on the ground are becoming increasingly tired and restive over incessant but fruitless military operations, as well as by the abuses they are ordered to commit against the masses and rampant corruption among their officers.

Duterte’s pipe dream of ending the NPA by mid-2019 is completely baseless. The conditions are increasingly favorable for the NPA to continue its nationwide growth and spread of the people’s war.