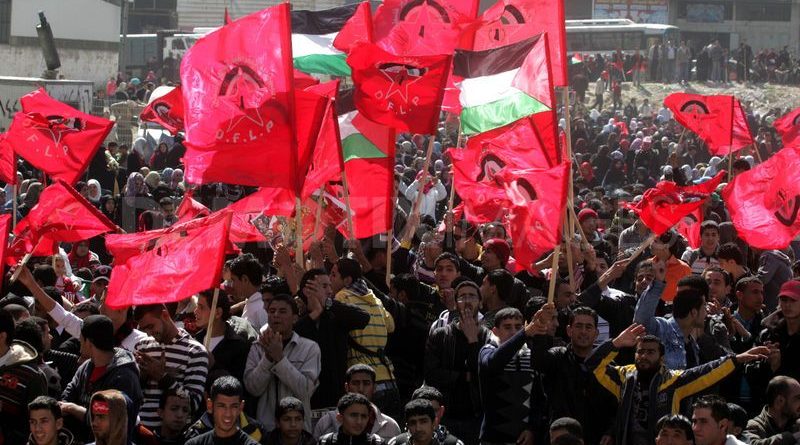 DFLP: The Declaration of Independence represents the plan of the course of the intifada towards the creation of total and sovereign independent state with Jerusalem as capital

The Declaration of Independence formed a title for the unity of our people and their political forces in all its presence areas in 48 areas, the 67 and the Diaspora, and a title of the national consensus on the intifada and resistance option, to achieve our goals through a balanced settlement framework, under the relevant resolutions of the international legitimacy that ensured the inalienable legitimate national rights for our people.

Oslo accord and its extensions came, from behind of our people and its political forces, and its national institutions, to be a political coup against the unified national program and the Declaration of Independence, and to destruct the achievements of the uprising by a regressive policy, that for a quarter of century from its bitter experience affirmed that it did not achieve (for our people and our cause) but disasters. While it provided the political cover for the occupation for more settlements, arrests, killings and destruction of the national economy and the infrastructure in the West Bank and the imposition of the blockade on the Gaza Strip.

Our people is still suffering from the disastrous results of Oslo accord and its extensions, and the official leadership of the PLO and the PA is still disabling the national decisions, in the Central Council, and the Executive Committee, for the liberation from Oslo restrictions, and restore the Palestinian national program, and the political conflict which experienced by this leadership ,is only a further evidence for the need to stop the exclusivity in decisions, and the deepening the division that shaped a stab in the back of the national cause and the struggles of our people.

We emphasize once again on our positions calling for an end to these disastrous regressions , and to return to the Palestinian national program, through the commitment of both sides of the division , Fatah and Hamas, to the decisions of the Cairo dialogue to restore the internal unity, and restructuring the national institutions on democratic foundations across the overall elections for the presidency, and for the legislative and national councils through the full proportional representation, and the implementation of the Central Council decisions (05/03/2015) to halt the security coordination, boycotting the Israeli economy, building the foundations of the national economy, mobilizing the popular uprising by protecting and developing it towards the national disobedience, internationalizing the national Palestinian issue and rights by getting the full membership of the State of Palestine in the United Nations, and by submitting draft resolutions and actual complaints (to the Security Council and the international Criminal Court) against the settlement and the siege of the Gaza strip, and for the release of prisoners and the provision of international protection for our people and their land in the face of occupation and settlement and holding of an international conference under United Nations sponsorship , and the permanent members of the Security Council, to ensure the solution of the Palestinian issue, and the national legitimate rights of our people in freedom, independence, return, and self-determination.

We call for transforming the commemoration of the Declaration of Independence to a struggle station to condemn the political coup on the national program, which led to Oslo and its extensions in 13/09/1993, and to condemn the military coup that led to the split in 14/6/2007, and to call for the restoration of the internal unity and the commitment to the decisions and documents of the national consensus (2005/2006/2015).

Democratic Front for the Liberation of Palestine
November 15, 2016