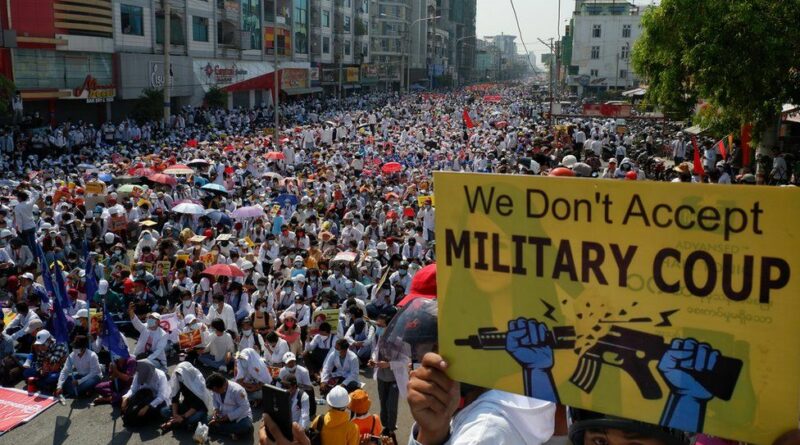 The CPP-TK extends red greetings to the people of Myanmar for more than two months of almost daily protests against the brutal military crackdown. Their struggle was a great inspiration that was not thwarted by pandemic and state violence. It should only be supported by the people of the world who love freedom and democracy.

It will be recalled that the Tatmadaw (military forces in Myanmar) staged a coup on February 1 to oust the country’s democratically elected officials. They seized power after defeating their front party to the party of Aung San Suu Kyi, the leader of the civil bureaucracy. Suu Kyi was also jailed and did not appear for a long time before being charged in their court. The Burmese people strongly condemned it and protested for the release of Suu Kyi and the restoration of democracy in their country.

The tens of thousands of Burmese people protesting against the dictatorship are a great example and worthy of emulation. It is impressive that they carry out quick protests or guerrilla rallies to continue to spread their resistance. They can also gather through other methods or activities such as vigils. In many cities, protesters and defenders barricade themselves with any weapon they can handle such as air guns, molotov cocktails, rocks, sticks and more.

Tatmadaw continues to oppress the people of Myanmar. Protesters were violently dispersed where about 570 rallyists were killed, 46 of them children. On March 27, 141 people were killed by the military in what has been called the bloodiest day in Myanmar.

On the same day, the military attacked and harassed national minority groups in their campaign of repression. They launched air raids in the Eastern part of Karen State despite the existing ceasefire between the Karen National Union (KNU) and the Myanmar government. Thousands of indigenous people were injured and fled to the remote countries of Thailand and India while 20 died. Tatmadaw did this to sow fear and prevent the unity of the whole country. The internet was even cut off to block gatherings.

The relentless violence of Myanmar’s military coup has reaped criticism from both left and right in the international community. The CPP-TK joins in condemning the violent dispersal and repression of the junta security forces against the people of Myanmar, including children, and atrocities against minorities.

In this sense, the CPP-TK supports the struggle of the people of Myanmar. All citizens whose rights are being violated are justified. The Burmese people must continue to assert their right to self -determination against the oppressive military dictatorship and without the interference of foreign powers. It is just to promote armed struggle to achieve national independence and democracy. The Burmese and Filipino struggle in advancing the fight against the dictatorship and dismantling the dominance of imperialism in the poor countries is instructive.