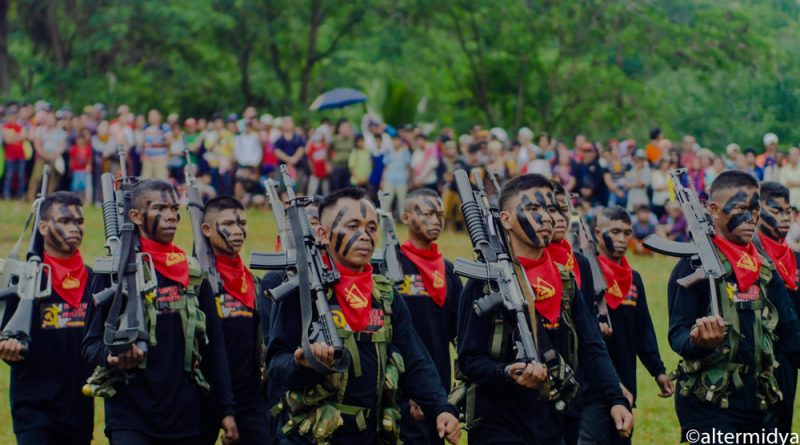 The Communist Party of the Philippines (CPP) is marking 49 years since its foundation with promises to continue advancing nearly five continuous decades of revolutionary struggle through mass organizing, intensified armed offensives, and continued efforts to overthrow the government of Philippine President Rodrigo Duterte. The party, which is illegal in the Philippines, has been waging East Asia’s longest-running communist insurgency through its armed wing, the New People’s Army (NPA), as well as base-building efforts in the cities, neighborhoods and countryside spearheaded by the revolutionary National Democratic Front of the Philippines (NDFP) encompassing mass movements across the archipelago.

In a statement by the Mindanao branch of the revolutionary NDFP affiliated with the party, spokesperson Joaquin Jacinto congratulated party cadre for their efforts and saluted the martyrs who have died in the fight to overturn what the left sees as the semifeudal and semi-colonial rule imposed on the people of the Philippines by successive governments in Manila, blasting the government of self-proclaimed “leftist” Duterte for revealing his “true character as a puppet of U.S. imperialism” who is loyal to the dictates of U.S. President Donald Trump.

“The U.S.-Duterte regime’s ‘change’ turned the economy for the worse and increased the suffering of the Filipino people: poverty rate increased, incidence of hunger rose, unemployment and underemployment shot up to new levels; the dearth of and disregard for social services, especially health and education, continue unabated; land grabbing and deprivation became more widespread and the displacement of peoples is at an all-time high,” Jacinto said.

In the city of Davao – a longtime fiefdom of the Duterte family – members of the NDFP clad in bandanas held a lightning rally Tuesday, occupying the intersection of one of the city’s oldest streets and blocking traffic with banners as they spray-painted the hammer and sickle on the pavement. Similar actions were also held in Manila and other Philippine cities.

This year’s anniversary is being marked amid a brief lull in hostilities after the NPA and the Armed Forces of the Philippines declared separate unilateral 8-day ceasefires to allow for the Filipino people to celebrate the Christmas and New Year’s holidays without fear of military conflict.

Fighting between the Manila government and the communists has raged in recent months following President Duterte’s issuance of Proclamation 360, which ended long-running peace negotiations with the CPP-NPA’s representatives in the NDFP.

The respite provided by the holiday season’s silencing of arms showed signs of strain after AFP officials accused the communist fighters of breaking their own ceasefire when an NPA detachment in Davao Oriental allegedly attempted to detain a civilian combatant who belonged to the AFP-supported Citizen Armed Force Geographical Unit paramilitary force. The attack was then followed by an alleged assault on a CAFGU patrol outpost in Compostela Valley where combatants “harassed” civilian reservist irregulars, according to an AFP spokesman.

Separately, AFP main spokesperson Colonel Edward Arevalo accused the CPP-NPA of being simply “terrorists” and “criminals” and having lost any legitimate ideological basis, according to a bellicose statement released by Manila government spokespeople on Tuesday.

“The CPP-NPA-NDF (National Democratic Front) lost its ideological mooring and all its actions reflect a terrorist organization rather that what they claim to be,” Arevalo said in a statement.

NDFP spokesperson Jacinto, however, accused the Duterte government of disregarding international protocols and rules of engagement in his counter-insurgency campaign against the left, allowing the AFP to “literally go on a bloody killing spree.” Meanwhile, the Philippine National Police have been pursuing the so-called “war on drugs” which has claimed nearly 15,000 lives, according to some estimates, mainly encompassing small-scale drug peddlers and users as well as non-drug-related members of progressive organizations, such as human rights monitors and farm workers’ unions.

Despite the attacks and imposition of martial law in Mindanao, Jacinto noted, the NPA has in this year alone launched nearly a thousand tactical offensives on the island and stocked its arsenal with enough high-powered weaponry to equip a “battalion of Red fighters.” The NDFP spokesperson asserted that revolutionary forces are more than ready to face the coming full-scale conflict promised by Duterte and are aware of the sacrifices required in the armed fight. The famously temperamental president has recently has labeled the CPP-NPA as “terrorists” — a move that many suspect was made to justify the extension of martial law on the island until the year’s end.

“Despite the use of airstrikes, armed drones and prolonged focus operations, not one single NPA unit in Mindanao were wiped out,” the spokesperson continued. “The number of platoons and companies have in fact increased this year. In spite of the constant black propaganda, bogus peace caravans and the incessant parade of fake or recycled surrenderees, NPA Red commanders and fighters never faltered; ever willing to sacrifice their lives for the revolution and the people than be servile to the fascist dictatorship of the US-Duterte regime.”

The Communist Party of the Philippines was reformed on the basis of Marxist-Leninist-Mao Zedong Thought in Alaminos, Pangasinan, on December 26, 1968, following the stagnation of the previous party founded in 1930. The refoundation also occurred amid the Sino-Soviet Split and China’s cultural revolution.

Aiming to rekindle the Philippines’ long history of anti-imperialist national liberation struggle, effectively combat the repressive pre-dictatorship presidency of Ferdinand Marcos and break the country’s militant leftists from the Soviet Union’s hegemony in the world communist movement, a young Jose Maria Sison – then known by his alias, Amado Guerrero – and his comrades formed the new CPP for the purpose of forging a new path in what the clandestine party describes as the “new-democratic revolution.”

The party’s foundation was followed by the issuance of documents laying out the party’s programmatic and ideological basis as well as the formation and strengthening of mass movements in the city and the countryside. On March 29, 1969, the CPP formed the NPA with an embryonic group comprised of “sixty fighters, armed with nine automatic rifles and twenty-six single-shot rifles and handguns in the second district of Tarlac province,” according to Sison, who was also Duterte’s former professor.

The party grew to a point that Marcos was driven to declare nationwide martial law on Sept. 21, 1972, opening the floodgates not only to widespread torture, repression and counter-insurgency against civilian communities but also to the rapid expansion of the CPP-NPA.

Given such history, members of the Philippine left are hopeful that in spite of the anticipated violent attacks waged by the Manila government against poor and exploited communities in the rural and urban regions of the country – or rather, because of such violence – the “U.S.-Duterte regime” itself will be the revolutionary left’s primary recruiter.