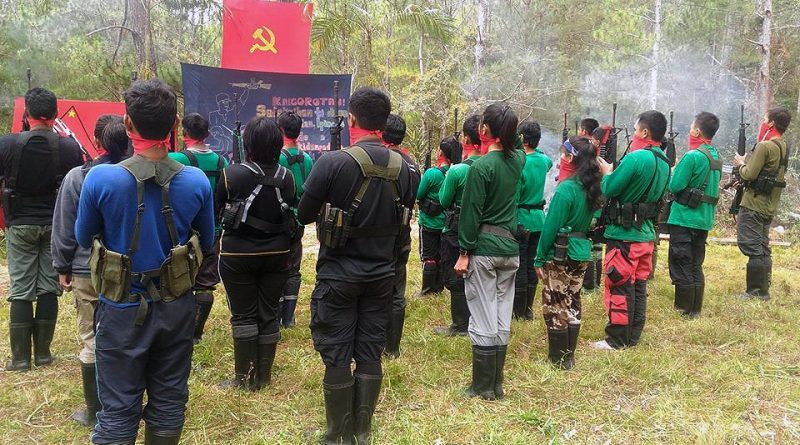 The Communist Party of the Philippines (CPP) dismissed President Rodrigo Duterte’s demand for the New People’s Army (NPA) to declare another ceasefire and for guerrillas to surrender and work for his government as paramilitaries.

In a statement Saturday, the CPP Information Bureau said Duterte’ demand for an NPA ceasefire as a precondition for the resumption of formal peace negotiations is unacceptable, adding the Armed Forces of the Philippines is conducting all-out war against their forces and civilians throughout the country.

“This is unacceptable. Does Duterte really take the revolutionary forces as fools?” the CPP asked.

In his speech on the 17th anniversary of Digos’ cityhood Friday, Duterte said there will be no talks with the National Democratic Front of the Philippines (NDFP) until the Reds declare a ceasefire.

“If you want to resume the peace talks, you declare ceasefire or nothing. And if you say you want another war, be my guest,” Duterte said.

Duterte cancelled the fifth round of formal peace negotiations between his government and the NDFP last May after the NDFP spurned his demand for another ceasefire “as a goodwill measure and create a favourable climate” for the negotiations.

The NDFP, however, said a ceasefire is unacceptable while Duterte is implementing a “triple war” through his so-called war on drugs called Operation Plan (Oplan) Double Barrel/Tokhang, counter-insurgency program called Oplan Kapayapaan, and martial law declaration in Mindanao.

“Duterte has lost all moral grounds to make such a demand. Recall that the NPA declared a ceasefire on August 19, 2016 which lasted for close to 160 days as a response to Duterte’s signed commitment to release around 500 political prisoners through an amnesty proclamation,” the CPP said.

“Duterte, however, wasted the goodwill of the NDFP when it failed to fulfil its commitment and took advantage of the NPA ceasefire to deploy his soldiers and conduct military offensives,” the group added.

The CPP said NDFP-GRP negotiations will no longer be fruitful while Duterte demands NPA capitulation and surrender.

“Surrender. I will make you soldiers of this republic. Just CAFGU (Citizens Armed Force Geographical Unit) for the moment,” Duterte in his speech said.

Duterte added there would be no preconditions for the surrender and promised to give them firearms and houses once they turn themselves in to a mayor or the military.

“He wants to convert surrendered NPAs into his soldiers? Duterte has truly gone insane,” Sison said in an interview with the Philippine Daily Inquirer.

Sison said that, early on, Duterte has been proven to be a liar and untrustworthy.

“The line has been drawn to separate, fight and overthrow the US-Duterte regime. Duterte would have a hard time to act convincing again,” Sison said.

The CPP said it is the people who clamor for the NPA to mount more and more tactical offensives.

“Victories of the people’s army inspire resistance amid widespread killings and the climate of fear imposed by the Duterte regime,” the CPP in its statement said.

“The NPA launches tactical offensive to bring to account the Duterte regime and its soldiers and police for thousands upon thousands of Oplan Tokhang killings, the successive killings of peasants, national minorities and youths, military occupation of civilian communities, aerial bombings and shelling, the near-genocidal war against the Maranaos of Marawi, arbitrary arrests and detention, and so on,” it added.

“By the looks of it, Duterte may not even last his term. He has roused the anger of the Filipino people and caused his increasing isolation. The revolutionary movement will surely outlast the US-Duterte regime,” the CPP said.

“The Filipino people and their revolutionary forces have waged close to 50 years of people’s war. They do not tire. They are determined as ever to wage revolution because they seek to end the unbearable sufferings of workers and peasants under the oppressive and exploitative system,” it added.