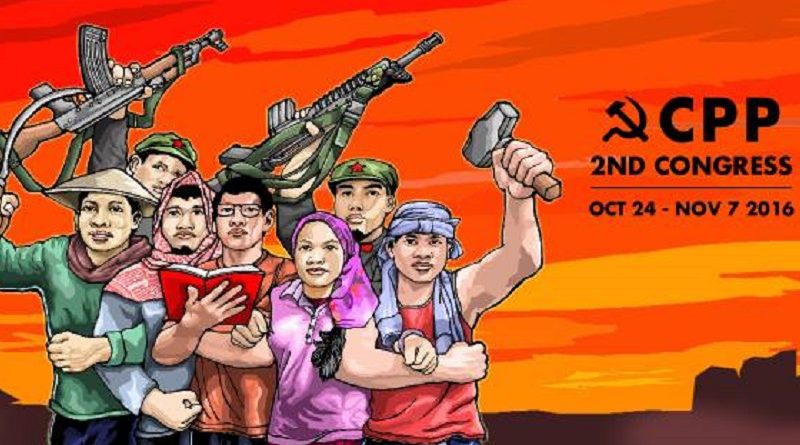 The Second Congress of the Communist Party of the Philippines was held successfully on the fourth quarter of 2016. It was historically dated October 24 to November 7, 2016 as a way of setting off the celebration of the 100th year anniversary of the victory of the 1917 Bolshevik Revolution.

The historic significance of the Second Congress of the Party is indubitable. For the first time in nearly five decades, key leaders and cadres representing the Party’s close to seventy thousand members, were assembled to strengthen the Party’s unity, amend its program and constitution based on accumulated victories and lessons and elect a new set of leaders.

The successful convening of the Party’s Second Congress is a testimony both of the accumulated strength and capacity as well as determination to assemble a big number of cadres. It underscores as well the inability of the reactionary state to destroy the armed revolutionary movement.

Despite relentless enemy military operations, the Second Congress was successfully held inside a guerrilla base. It was secured by a battalion of New People’s Army (NPA) Red fighters and enjoyed boundless support of the peasant masses and indigenous minority groups in the area.

The Second Congress was composed of 120 delegates, both attending and non-attending. Of those who attended, around 30% were above 60 years old, while around 60% were in the 45-59 years age bracket, while 15% were 44 years and younger. The oldest delegate was 70 years old. The youngest delegate was 33 years old.

Reflecting the relative size of the Party’s membership, cadres from five Mindanao regions constituted around 45% of the regional delegates; while those from Luzon constituted 40%; and Visayas, 14%. The other delegates represented the Party’s central leading organs and its commissions.

Guided by the theme “Greater unity, greater victories,” the Party’s Second Congress took a long view of the Party’s 48 year history, took stock of the current objective and subjective conditions and reaffirmed the Party’s determination to advance the national democratic revolution to greater heights.

Amendments to the Constitution

The Second Congress amended the CPP Constitution to reflect the Party’s experience in applying Marxism-Leninism-Maoism as ideological guide in its concrete revolutionary practice.

The biggest important amendment to the Constitution was the elaborated preamble which enshrined the Party’s basic principles including its analysis of the concrete conditions of Philippine society, its national democratic line and program for waging a people’s democratic revolution to pave the way for socialist revolution and construction, its stand and history of struggle against modern revisionism, its strategy and tactics for advancing protracted people’s war and waging armed struggle as principal form of struggle, and establishing the people’s democratic government.

A new article enunciating the role of the Party in the united front was introduced. Amendments were also made to complete the enumeration of the economic classes and their arrangement in terms of membership acceptance. A new provision was inserted to allow members of foreign fraternal parties assigned to work within the scope of the CPP to be accepted as members of the Party.

Another provision was inserted to specify the right of Party members who have reached the age of 70 years to retire from Party work but retain Party membership and to receive subsistence support and medical assistance. A new provision was also approved specifying the formation of advisory committees to which Party cadres who have opted to retire can be organized into.

To ensure the vigor and vibrancy of the Party, a provision was introduced specifying that steps be undertaken to ensure that the Central Committee shall have a balance of young, middle-aged and senior cadres.

The Second Congress updated the Party’s Program for a People’s Democratic Revolution. It presented an updated critique of the semicolonial and semifeudal social system, giving particular attention to the post-Marcos succession of pseudo-democratic regimes, the worsening forms of oppression and exploitation of the broad masses of workers and peasants and the deteriorating socio-economic conditions of the Filipino people in almost four decades under the neoliberal regime.
Drawing lessons from the Party’s rich history, the Second Congress presented a clearer picture of the strategy and tactics for taking advantage of the insoluble and worsening crisis of the world capitalist system, the strategic decline of US imperialism and the chronic crisis of the domestic ruling system in order to advance the protracted people’s war towards complete victory.

The Party’s general program calls on all Filipino communists to “be ready to sacrifice their lives if necessary in the struggle to bring about a new Philippines that is completely independent, democratic, united, just and prosperous.”
The Party program reaffirms the necessity of waging armed revolution in order to counter the armed violence employed by the US imperialists and the local reactionary ruling classes and end the oppressive and exploitative semicolonial and semifeudal system.

The updated program presents ten general tasks and then proceeds to lay down the specific tasks in the political, economic, military, cultural and foreign relations fields.

The Second Congress elected the new Central Committee and Political Bureau for a five-year term.
More than half of the newly-elected CC members are from the young and middle-aged cadres of the Party, ensuring that the Party leadership will remain vibrant, tightly linked with the lower levels of leadership and capable of leading the practical work and day-to-day tasks of the Party, especially in waging revolutionary armed struggle against the reactionary state.

The combination of senior Party members with the young and junior Party cadres will ensure the ideological, political and organizational training of a new generation of Party leaders who will be at the helm of the Party in the coming years.
It is the task of the senior cadres to transfer knowledge and skills by summing up their individual and collective experiences in order to help guide the present work of the younger generation of Party leaders.

The Second Congress resolved to give the highest honors to Comrade Jose Maria Sison as founding chair of the CPP. It extolled Ka Joma as a “great communist thinker, leader, teacher and guide of the Filipino proletariat and torch bearer of the international communist movement.” The Second Congress recognized his immense contribution to the Philippine revolution and the international working class movement.

It likewise resolved to continue to seek counsel and take guidance from his insights on the ideological, political and organizational aspects of the Party’s work. It also endorsed the five-volume writings of Ka Joma as basic reference and study material of the Party. The Second Congress averred that the Party having the treasure of Marxist-Leninist-Maoist work that Ka Joma has produced over the past five decades will ever be capable of leading the national democratic revolution to greater heights and complete victory in the coming years.

The Second Congress also resolved to honor all the heroes and martyrs of the Party’s Central Committee “who served as models of selfless dedication and served the Party to their last breath.”

The Second Congress approved to celebrate with boundless joy and appropriate festivity the 100th year anniversary of the victorious 1917 Bolshevik Revolution in Russia on November 7, 2017. The objectives are to draw lessons and inspiration from the first successful socialist revolution and the unprecedented rapid economic and social progress achieved from 1917 to 1953 under proletarian leadership as well as to reaffirm the continuing viability of the socialist revolution in the face of worsening crisis of the global capitalist system.

The Second Congress also approved to mark the 50th anniversary of the Party on December 26, 2018 by summing up the Party’s history and celebrating the victories achieved by the Party and people in the past five decades of revolutionary struggle.

The Second Congress finally resolved to salute all Red fighters of the NPA composite battalion force, as well as members of the people’s militias, and all other Party members and activists who helped secure the delegates, assist in their travel, prepare meals, provide medical assistance and other support services.