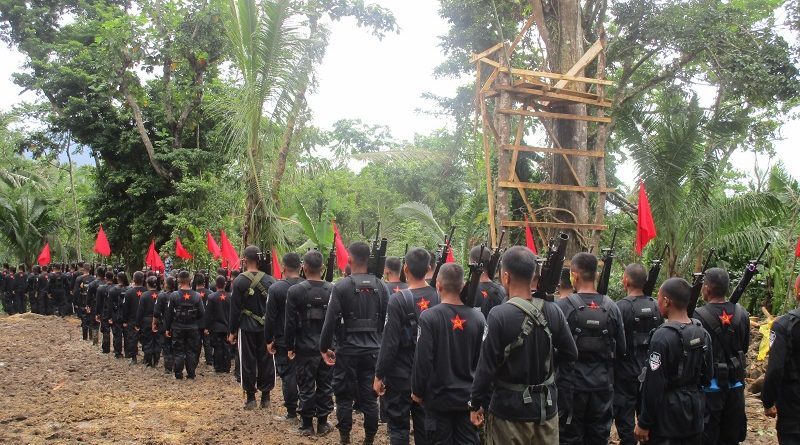 The 8th Pulang Bagani Company-New People’s Army carried out a series of counter-offensives against the operating troops of the 25th Infantry Battalion, punishing 11 fascist soldiers and seizing six firearms during a raid, an attritive action and an ambush on August 2, 4 and 5, 2016 in Monkayo town, Compostela Valley.

The NPA’s punitive action is a just reprisal in the face of atrocities committed by the 25th IB combat soldiers such as ransacking of civilian houses and farms, mauling and intimidation of peasants and Lumads in Monkayo town since June. In fact, the notorious Army unit had not reduced the intensity of its combat-intel-psywar operations in the communities during GRP. Pres. Rodrigo Duterte’s short-lived unilateral ceasefire last week.

The 8th PBC-NPA on August 2, neutralized Cpl. Castro, an intelligence operative of the 25thIB who was caught conducting combat intel operation in the communities of Brgy. Baylo, Monkayo. Seized from him were a 9mm caliber and .22 caliber pistols.Two days later, the Red fighters engaged a platoon of the 25th IB in Brgy. Pasian, Monkayo, killing two Army soldiers and wounding three others.

The 8th PBC’s tactical counter-offensives against an abusive AFP unit in the peasant and Lumad villages should serve as a stern warning to other operating Army units in Southern Mindanao region. These AFP troops that are active in combat-intel-psywar operations in the countryside continue and remain to be legitimate targets of the Red Army.

The NPA Southern Mindanao Regional Operations Command has directed all Red fighters in the region to remain on alert status, intensify its base building and base defense work, expand its services in the guerilla bases and guerilla zones, punish AFP troops operating in civilian communities, and pursue revolutionary justice for the basic masses who are victims of repression and fascist abuses.

As it awaits positive development in the forthcoming peace negotiations between the GRP and the National Democratic Front of the Philippines, the Red Army shall defend its ranks and the masses through armed offensives and counter-offensives, foil the AFP’s treacherous and ruthless military operations, and remain committed in addressing the roots of the armed conflict.