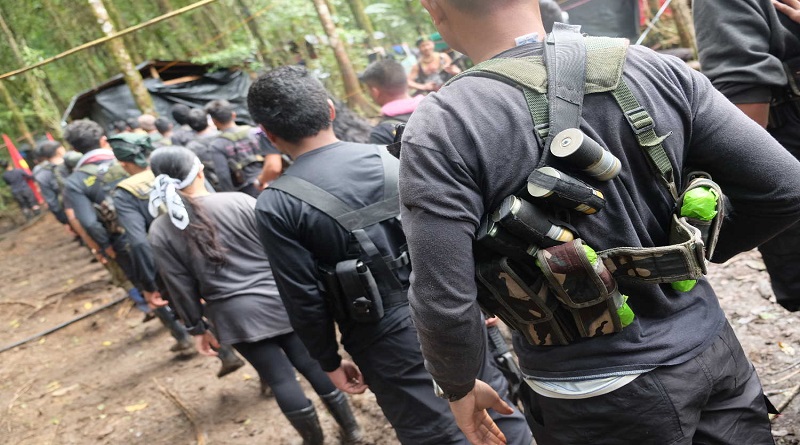 CABANGLASAN, BUKIDNON – Members of the New People’s Army – South Central Bukidnon Sub-Regional Command (NPA–SCB–SRC) harassed the 24 troops of the 8th Infantry Battalion, Philippine Army on July 4, 2015, 4:20 PM, in Sityo Kalakapan, Brgy. Kanangaan, Cabanglasan, Bukidnon. According to reports, a member of the 8th IB was killed while other two were wounded in the two to three minutes’ exchange of fire. Meanwhile, NPA troops safely withdrew from the said area.

On the following day, June 6, around 8:00 AM, 40 troops of the 8th IB and Special Forces, under the 403rd Brigade, made a surprise attack on an NPA camp in a sylvan part of Sityo Miaray, Brgy. Manggaod, Cabanglasan, Bukidnon. They were able to infiltrate the camp’s kitchen and from here, more than an hour of exchange of fires occurred, where three of the AFP troops killed. Meanwhile, a column of the enemies’ troops headed to a favorable terrain, without knowing that a command-detonated explosive was installed in. Just as the enemy positioned, the NPA switched the CDX. The casualties of the enemy on the explosion has not yet been confirmed.

These active defense acts of the NPA took place amid the continuing Community Organizing for Peace and Development (COPD) of the 8th IB in the hinter barrios of Cabanglasan and San Fernando, Bukidnon since November last year. They have not been moved to discomfiture despite the several months of mass protests on their wrong-doings. These are also apparent desperate reactions of the 8th IB from the previous months’ series of victories of the NPA–SCB in weakening their confidant Alamara —- the like of the capitulation of arms of seven of their members to the NPA on April 28, the ambush to the siblings Emyong and Oba Balanban on June 2, the sparrow of Jason “Dakson” Lindaw on June 16 and the death of their guide Janie Keblatan during their combat operation on June 23.

The statement of 1Lt. Erwin Bugarin, of CMO-8th IB, that there were NPA casualties on the said encounter, was a big falsehood. They only recovered camp tools and apparatus. No firearms seized and no NPA killed on the said encounters. While he can never disown casualties of the 8th IB, for they mobilized the residents to convey their deceased and injured troops. From these skirmishes, it would be certain that Bugarin would promulgate more fake news through the media against the NPA and the residents of the said town.

On this 48th day of Pres. Rodrigo Duterte’s declaration of Martial Law over Mindanao, the AFPperpetuated their combat operations, infiltrations and psychological wars towards the revolutionary movement. With the recent decision of the Supreme Court on the constitutionality of the said declaration, the AFP have been granted with license to disclose its fangs to suppress the people’s basic rights.

During his visit in Malaybalay City on June 6, Duterte mentioned not a single word to the public concerning abuses of the 403rd Brigade against the Lumad residents, just like the forced evacuation of the residents of Cabanglasan and San Fernando. He did not also make a single glimpse on the aggravating cases of extra-judicial killings towards Lumad-leaders in the province and the several months of harassment to communities by the paramilitary groups Alamara, NIPAR and Dela Mance, amid of the warrant-of-arrests dispensed against them. Instead, he prioritized the injured casualties of the AFP in its encounters against the Maute in Marawi and the NPA in Bukidnon. It is then clear that these protectors of investors and multi-national corporations are in his primacy, not the poor majority who purportedly composed the bulge who let him won the elections.

Hence, up until socio-economic agenda will not be accurately and finally discussed in the negotiation table between the GRP and NDFP, the NPA will remain steadfast in defending themselves and the people they serve against the vicious and fascist attacks of the AFP, paramilitary groups and Philippine National Police (PNP) under the plot of the perpetuating all-out war of the regime. In this case, the revolutionary movement will not just intensify. Moreover, the conceiting “Left President”, in his own accord, will get rid of his smokescreen and will be exposed to whom he directs his “change” and “development”.