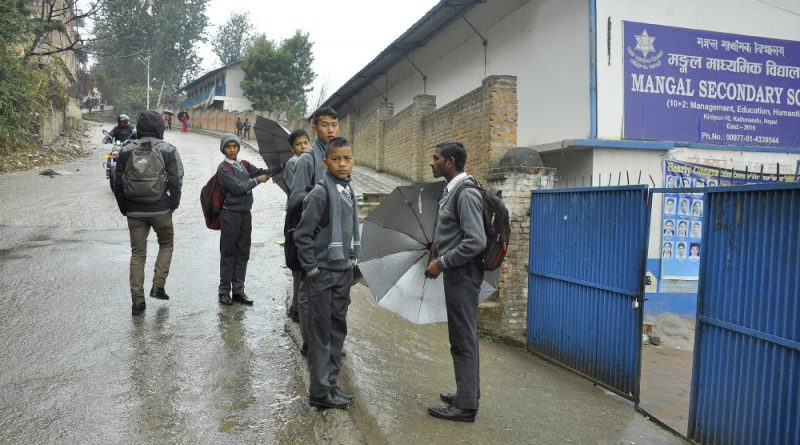 Millions of students—from pre-primary to university level—were affected on Thursday as most of the academic institutions remained closed due to a strike called by the student wing of the Netra Bikram Chand-led CPN, demanding release of its leader.

The All Nepal National Independent Students’ Union (Revolutionary) said it resorted to the closure of the schools and colleges to pressure the government to release its treasurer Narendra Bishwokarma.

He was arrested by the Biratnagar police with arms on January 30 while he was on his way to the Capital. This is the sixth strike in the current academic session by the union.

The academic institutions remained closed on May 4-5 last year following its strike in the education sector. Similar strikes followed on June 17, August 14 and September 23. Sarita Tamang, a third grader at Shree Pancha Kanya HIgher Seconday School in the Capital, returns home from school following a strike called by the student wing of the Netra Bikram Chand-led CPN, on a rainy Thursday morning. Most of the educational institutions across the country remained closed due to the strike. Despite the government’s declaration of schools as zone of peace, prohibiting any type of strike and other protest programmes at schools, it has been violated repeatedly.

Though the government on May 25, 2011 declared schools zone of peace, the closure of academic institutions to pile pressure on the government to fulfil interests of the political parties and their sister wings continues.

Currently, it is the Chand-led party and its sister wings which are resorting to such protests.

Chiranjibi Dhakal, chairman of the union, said closure of the academic institutions was their last resort to build pressure on the government. He claimed that Bishwokarma was framed by the Morang administration. “We will stop such protests if the government stops targeting us,” he said.

A government report shows around 7.3 millions student study at the school level while the number of university students stands at around half a million.

Education experts say barring students from their right to study is a crime.

Education expert Man Prasad Wagle said along with around 7.5 million students, their 15 million parents are affected by such protests. “We cannot imagine more heinous crime than this,” he said in a facebook post. A group of college students are about to return home following a strike called by the student wing of the Netra Bikram Chand-led CPN, on a rainy Thursday morning.

According to school operators they were compelled to shut their institution as they are not in position to take the risk.

Karna Bahadur Shahi, former chairperson of National Private and Boarding Schools Association Nepal, said as the union had threatened to attack, it was unimaginable to run the schools.

“Who do we hold accountable if anything happens to our children?” he asked.

Shahi says an attack in the school or to their children will directly lead to reduction in the enrolment, therefore no one can take the risk. He said while such acts are unabated, the government has failed to take any concrete step to control them.

According to Shahi, the loss in study caused by such strikes are covered by reducing the summer or winter leave. They claim the schools, as envisioned by the Education Ministry, are opened by 220 days in an academic session.