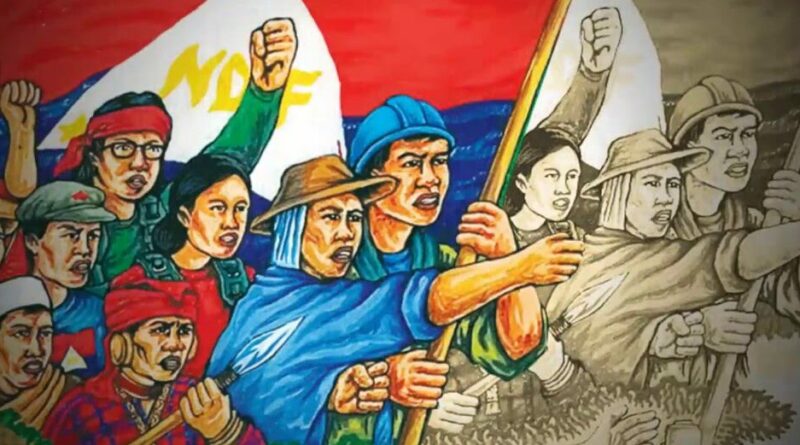 The NDFP-ST leadership and the revolutionary people in the region extend their heartfelt congratulations and salute to Lucio de Guzman (LdGC), Apolonio Mendoza Command (AMC) and Narciso Antazo Aramil Command (NAAC) in the successive and successful launch of tactical offensives against the executioner and fascist troops of the AFP and PNP in Mindoro Occidental, Quezon and Rizal. We also congratulate and thank the ranks of the masses who supported and helped to carry out the successful tactical offensives of the people’s army. The NPA’s successful tactical offensives would not have taken place without the deep and broad support of the masses in the provinces of Mindoro Occidental, Quezon and Rizal. It strongly refutes the lies that the executioner General Antonio Parlade Jr. and other high-ranking military officers in the Southern Luzon Command (SOLCOM), the PNP-CALABARZON (IV-A) and PNP-MIMAROPA (IV-B) are spreading, who no longer enjoy support from the citizens of the region.

The broad masses in the region are celebrating the new heroism displayed by the units under Melito Glor Command (MGC). Greetings and compliments greeted the comrades who carried out tactical offensives from the masses in Mindoro Occidental, Quezon and Rizal. They know that the tactical offensives launched by their people’s army are part of charging and giving justice to the oppression, poverty and enslavement they are experiencing at the hands of Duterte’s fascist and butcher troops. They have full confidence and hope in the NPA and the revolutionary movement as the ones who will fulfill their long-held aspiration to achieve social justice towards a truly free, democratic, prosperous and prosperous society.

On June 5, 2021 at exactly 11:00 a.m., a unit of the Apolonio Mendoza Command (AMC) successfully ambushed 85th IB-PA troops and CAFGUs as it crossed the Lopez-Buenavista Road in part of Batabat Sur of Buenavista town, Quezon. Cafgu Romar Gono was killed in the ambush and two others, Arnel Bejamunde and Sergeant Victor Bartocillo, were injured. There were no casualties on the side of the AMC troops. After the successful TO, the mercenary 201st Infantry Brigade terrified withdrew the troops of the 85th IB, 59th IB and Cafgu conducting FMO in South Quezon and Bondoc Peninsula. They forcibly included civilians as a precaution against retreat while their officers even rode the mass horse to quickly get away and get to the exit.

Meanwhile, on May 28, 2021, at 10:30 a.m., a unit of the Lucio de Guzman Command (LdGC) successfully ambushed the joint forces of the 1st Provincial Mobile Force Company of the PNP-MIMAROPA and the 203rd Brigade of the Philippine Army aboard a back-to-back PNP vehicle. The successful ambush, which nearly wiped out a policeman and a soldier in a patrol car, took place in Sitio Banban, Barangay Nicolas, Magsaysay, Mindoro Occidental. In the said battle, three (3) fascist troops were killed and ten (10) were wounded of which six (6) were seriously injured.

The ambushed PNP vehicle was part of a convoy conducting a psywar operation, under the guise of community dialogue, in villages and towns in Mindoro Occidental organized by the Provincial Task Force to End Local Communist Armed Conflict (PTF-ELCAC). The said activity was led by Governor Eduardo Gadiano of Mindoro Occidental as Chairman of PTF-ELCAC. However, in a statement from the LdGC, they clarified that the ambush did not target Governor Gadiano but the PNP and AFP butchers in the province who were with him in the convoy. The PNP vehicle that was ambushed was the last vehicle in the convoy that was far removed from the previous three (3) vehicles which included Governor Gadiano’s vehicle. The LdGC ensures that no civilians will be involved in their ongoing tactical offensive. The LdGC has long been aware that the NTF-ELCAC, through the 203rd Bde-PA and PNP-MIMAROPA, is intimidating, harassing and harassing local provincial officials to become the main tool of the US-Duterte fascist regime in the violent and bloody counterattack. -its revolutionary war against the CPP-NPA-NDFP and struggling Mindoreños.

Prior to the successive successful ambushes in Magsaysay, Mindoro Occidental and Buenavista, Quezon, two (2) tactical offensives were launched by the AMC unit in North Quezon.

On May 8, at 11:30 a.m. in sitio Makanamban, Barangay Pagsangahan, General Nakar, Quezon, an AMC unit ambushed 30 troops of the 80th IB who had been operating in the area for a long time. An NPA unit ambushed them and damaged the advance team of the 80th IB that was crossing the river.

On May 17, the same NPA unit conducted a harassment operation in Sitio Lagmak, Barangay Pagsangahan, General Nakar, Quezon. They fired on the 40 operating troops of the 80th IB. The enemy fled and their operation was delayed for several days. On the other hand, the Dumagat natives are celebrating the offensive action taken by the guerrilla forces.

The AMC’s punitive actions against the 80th IB troops operating on the border of Rizal and Quezon are in response to the request of the Dumagat masses in the area to hold the 80th IB butcher accountable for its violence and crimes against the people of Rizal and North Quezon. It will also provide justice to the victims of extra-judicial killings (ejk’s) in Rizal by the 80th IB along with the Special Action Force, CIDG and local PNP forces.

For all intents and purposes, Duterte’s fascist troops should be charged and paid dearly for their brutality and heinous crimes in the country. The people of the region are disgusted with the AFP and the PNP for waging dirty wars, violence, killings and terrorism that attack the human rights and basic democratic rights of the people.

The people of Southern Tagalog can hope that the revolutionary movement will continue to fulfill its duty to advance their demands, defend their rights and welfare and continue to charge and punish fascist troops wherever and whenever there is an opportunity for them.

The NDFP-ST extends its condolences to the orphans of those killed in the fighting among the AFP and PNP. This is inevitable because there is an existing armed conflict in the country between the revolutionary movement and the reactionary armed forces. The value of life is measured and weighed against whom you offer it. The lives of the revolutionary martyrs are great because they unselfishly dedicate it to advancing and defending the interests and aspirations of the oppressed and exploited masses against the local tyrants. Meanwhile, the lives of the fascists and mercenaries AFP and PNP are meaningless because they are instruments in defending the exploitative and oppressive system of the local ruling class and maintaining the power of imperialism, feudalism and bureaucrat capitalism in the country.

As long as the root causes of poverty, backwardness and social injustice are not resolved, armed conflict in the country will continue. With the US-Duterte regime turning its back on peace talks with the NDFP, it has closed the door to a political solution to achieve lasting peace in the country based on social justice. Duterte chose to intensify his counter-revolutionary war against the CPP-NPA-NDFP and the Filipino people. By his Executive Order No. 70, Duterte created a monstrous National Task Force to End Local Communist Armed Confict (NTF-ELCAC), a de-facto civilian-military junta that overrides the civilian authority of the reactionary government. With the formation of the NTF-ELCAC, the violence and terrorism of the AFP and PNP in the countryside intensified. Demonization, red-tagging and terrorist-tagging have been systematic and orchestrated against individual government critics, human rights defenders and legitimate progressive organizations. Systematic red-tagging and terrorist-tagging is equivalent to a death warrant and license for the wanton killings of NTF-ELCAC-branded communists and terrorists. This is what happened to Atty. Benjamin Ramos and Zara Alvarez of Negros Occidental, Jory Porquia in Iloilo, Southern Tagalog labor leader Dandy Miguel and the victims killed on Bloody Sunday as well as the synchronized enhanced managing of police operations (SEMPO) launches in the provinces of Rizal, Masbate, Camarines Sur, Camrines Norte, Negros and Iloilo.

The US-Duterte fascist regime also owes a lot of blood to the slain NDFP Peace Consultants and peace advocates such as Julius Giron, Randy Malayao, Randall Echanis, couple Eugenia Magpantay and Agaton Topacio, Antonio Cabanatan, Rustico Tan and Reynaldo Bocala. The US-Duterte fascist regime and its assassins must be held accountable for its sins and crimes against the people and the revolutionary movement.

It is only right and just that the revolutionary movement and the people intensify their fight against the useless, corrupt, traitorous, tyrannical, criminal and murderous Duterte regime. Punish those who owe blood and get justice for all the victims of Duterte’s heinous crimes. The NPA must continue to strengthen in the region and launch tactical offensive capabilities that will surely win, crush and step by step weaken the backbone of the fascist and mercenary AFP and PNP in the region. The CPP-NPA and NDFP will continue to strive to advance people’s democratic revolution through protracted people’s war to achieve victories and further victories in the immediate future.