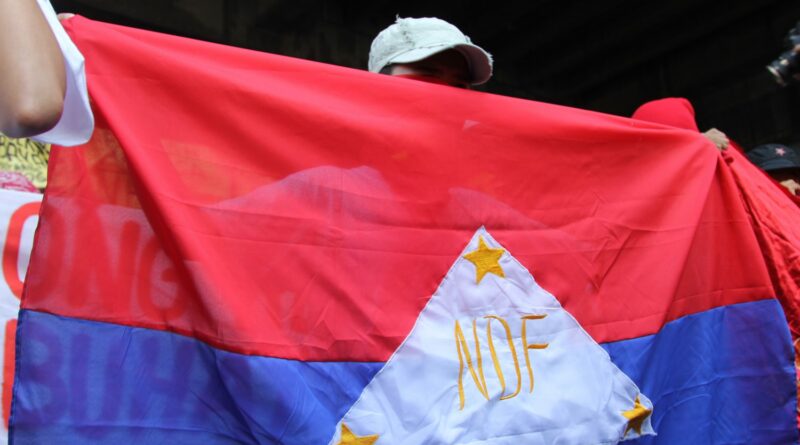 The National Democratic Front-Eastern Visayas today condemned the Armed Forces of the Philippines (AFP) for conducting an early-morning shelling of farmlands in Northern Samar province, to terrorize peasant communities in three barangays it had previously declared as “cleared” of influence of the revolutionary movement.

“While the AFP repeatedly alleges these barangays are ‘cleared’ of influence of the New People’s Army, hindi naman nila tinatantanan ang mga mamamayan dito. These fascist monsters are the ones belying their own declarations and proving themselves stupid,” the NDF-EV said.

Citing reports from the provincial command of the New People’s Army (NPA), the NDF-EV said that at past 1 o’clock in the early morning December 26, while most people were asleep after celebrating Christmas Day, the AFP fired at least four rounds of 105mm howitzer towards farmlands at the boundary of Barangays San Miguel, Las Navas, and Osang and Hinagonoyan, Catubig. San Miguel and Osang are among the six barangays in Eastern Visayas declared “cleared” by the AFP.

“The AFP wantonly fired at the farmlands even though no armed encounters between the AFP and the NPA occurred immediately prior. It shows that the shelling did not serve to hit any targeted NPA unit, but to sow terror among the peasant masses in the Catubig-Las Navas valley right on the occasion of the anniversary of the Communist Party of the Philippines (CPP). This is in line with the Duterte regime’s standing policy of using brutal fascist state terrorism to attempt to snuff out the people’s determination to wage all forms of struggle, including armed revolution,” the NDF-EV said.

The December 26 terror shelling was the third aerial attack by the AFP in the Catubig-Las Navas farmlands since September 16. The first was also an early-morning flurry of bombs and cannon fire which lasted until the afternoon, while the second was an indiscriminate shelling spree after a successful NPA harassment operation last November. Residents from at least 10 barangays were terrorized and intimidated from attending to their farms.

The NDF-EV added, “the AFP insists that San Miguel and Osang are ‘cleared’ barangays, but they continue camping in these barrios, conducting combat-intelligence-psywar operations, and firing at the peasants’ farmlands. These are attacks that directly inflict damage not at the NPA but the masses. The AFP is clearly aware whom they aiming their guns at.”

The terror shelling in Catubig-Las Navas was only one of the slew of terrorist attacks of elements of the AFP in Northern Samar province on the occasion of the CPP anniversary. Residents from San Miguel were also hoodwinked by soldiers into attending a “peace rally.” Fascist state troops have also been camping in the barangay health center and day care center, violating international humanitarian law and earning the ire of residents who complain that they cannot use these facilities.

Prior to the CPP anniversary, barangay officials in Osang were forced to issue a resolution giving permission to fascist state troops to camp inside the barrio, also in violation of international humanitarian law. “They are forcing the people to support the fascist troops’ operations, even if they are notorious rights violators and are responsible for many atrocities in their communities.

The NDF-EV called on the people to continually expose and oppose the AFP’s fascist state terrorism. “They must denounce every terrorist attack, every shelling and bombing, by the fascist AFP against the people. They must wage all forms of struggle to resist militarization in their communities and drive out these fascist troops who are causing them hardship and wantonly violating their rights.”