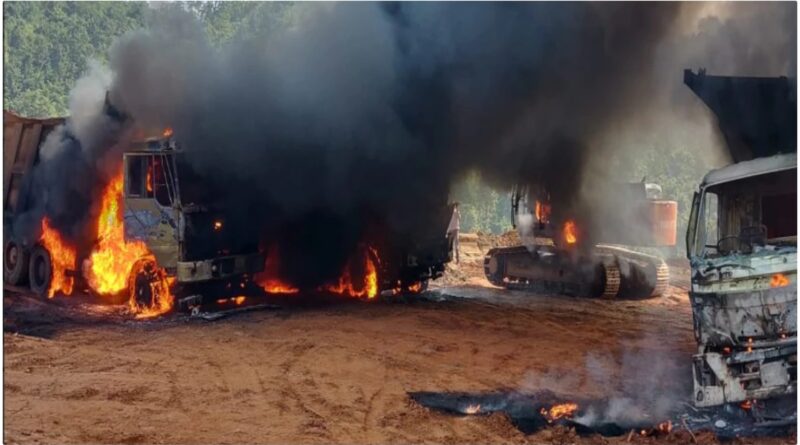 As per the preliminary information, nobody was injured in the incident.

The Naxalites video recorded the act and circulated the clip on social media, a senior police officer said.

The incident occurred on Friday evening between Kalmuchhe and Marapi villages, where the road construction work is going on under Prime Minister Gram Sadak Yojna (PMGSY), Kanker Superintendent of Police Shalabh Sinha said.

According to the preliminary information, a squad of armed Naxalites stormed the construction site, located around 20 km from Kanker town and about 170 km from the state capital Raipur, and ordered the laborers to stop the work, he said.

They then set afire two trucks, two mixture machines and a JCB machine, the SP said.

A police team reached the spot and launched a search operation.

The video of the incident showed two trucks on fire while some men, clad in Naxal uniforms, are walking nearby.

One of the Naxals is seen video recording the burning trucks.

In a banner put up at the spot, Naxals have asked to stop the construction works and threatened to kill road contractors if they take up the work without the approval of locals.

Naxals have frequently tried to disrupt road construction works in the Bastar division, which consists of seven districts, by launching attacks on security forces and damaging the roads, vehicles and machines used in the work, according to police.