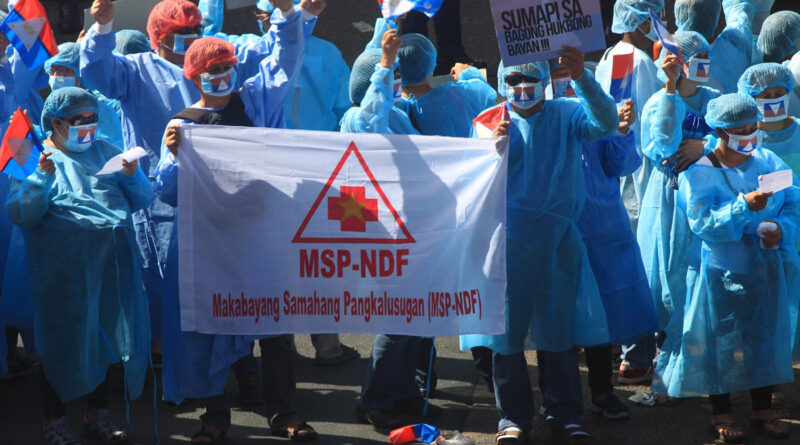 The health workers’ daily battle against the Covid-19 pandemic is no easy feat. They gamble their own lives and their families’ safety every single day that they struggle against this crisis that strangles the country today. The Makabayang Samahang Pangkalusugan (MSP-Bikol) strongly supports the massive protest action and strike that the health workers plan to launch. It is right for the US-Duterte regime to provide, and in fact even go beyond, all the righteous demands of frontliners. Promises of benefits written in thin air are never enough. It is unacceptable for the regime to claim that there is not enough funds. The DOH and the whole Duterte government must not be allowed to escape accountability.

How can this not be so when even from the very beginning, Duterte treats the lives and welfare of the Filipino people with not the slightest grain of respect. Even before the pandemic, he has continued and worsened the implementation of neoliberal projects and oppressive labor practices that have pushed the health workers and the whole sector into a depressing state. While the DOH’s budget trails behind all the other agencies’ budgets and has always received insufficient funding, trillions of funds have been pouring interminably for the Build, Build, Build program and other projects that big capitalists and foreign investors drool after.

Most of all, the tyrant knows nothing else but fascism and terrorism. Hundreds of billions have been wasted away for bullets, bombs and weapons of mass destruction that have wrecked communities while not even a cent went to the pockets of health workers and professionals. The people will not forget how Duterte doubled the police and military wages way before giving spare change for the wage increase of workers from all sectors. The regime prioritizes the modernization of the murderous institutions of AFP and PNP while there is no meaningful program to support research and development. Now, even in the midst of the pandemic, Duterte chose to prioritize the implementation and funding of his futile and massively destructive war against the people.

Even worse, the grave corruption and anomalies within the health sector exhaust the already lacking funds. From the scandal of hundred of billions plundered by the Philhealth to the P67 billion funds that the DOH did not allocate for the frontliners – the whole sector is undeniable riddled with cases of graft and corruption. In the face of it all, Duterte has the nerve t insult the people and announce that even if he is the only remaining person in the world, he will always be by DOH Sec. Francisco Duque III’s side.

MSP-Bicol calls for the Bicolano masses to support the medical frontliners struggle. Strongly condemn, expose and oppose the fascist regime’s attempts to feed their twisted logic that the health workers’ protests and the people’s struggle will only bring about conflict and disunity. The medical frontliners do not shy away from their mandate to provide care and remedy for the people. They are only justly defending their rights that the government takes away from them. It will never be wrong to fight for the people’s democratic rights that have long been usurped. Truly, only the united people’s struggle shall bring meaningful change and shall clear the way for the health workers and all the other exploited and oppressed classes to own and realize what is rightfully theirs.