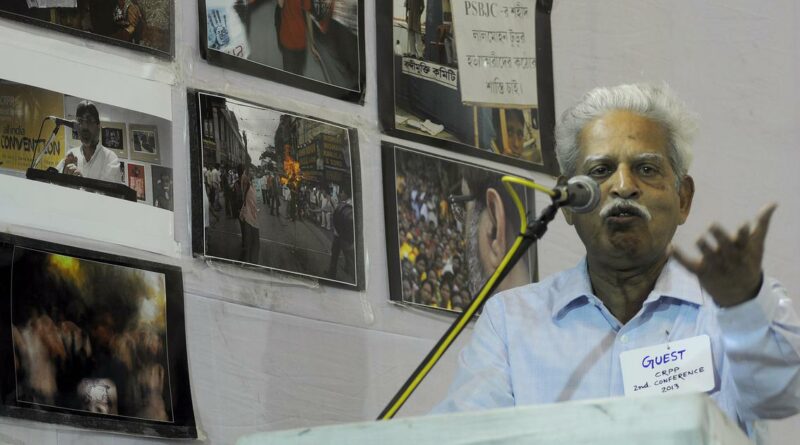 Mumbai, February 22, 2021: The Bombay High Court on Monday granted temporary bail for six months to 82-year-old poet and activist Varavara Rao, an accused in the Elgar Parishad-Bhima Koregaon case. Rao, who has been under custody awaiting trial since August 2018, should surrender after completion of temporary bail period of six months, the bench said.

Rao has been granted bail on the condition that he has to remain in Mumbai and should be available for investigation. The court further asked him to furnish a personal bond of Rs. 50,000 and also to attend the NIA Court for trial. “However, he may apply from exemption from personal appearance before NIA court.” Rao will be discharged from Nanavati Hospital depending upon his condition today and to remain within jurisdiction of NIA Court Mumbai for a period of six months.

A division bench of Justices S S Shinde and Manish Pitale said: “With all humility at their command, keeping in mind human consideration, the well recognized fundamental rights of the undertrial to have quality medical aid for serious ailments suffered by him, advanced age, inadequate facilities in the Taloja jail hospital.” “We are of the opinion that this is a genuine and fit case to grant relief; or else, we will be abdicating our constitutional duty and function as a protector of human rights and right to health covered under right to life guaranteed by Article 21 of the Constitution of India,” HC said.

The bench in its 92-page judgment said, “We feel that although the material on record does show that the health condition of the undertrial is precarious, sending the undertrial back to where he belongs, is fraught with the risk of his presence being used by those allegedly associated with him to seek to revive the nefarious activities.” “This court cannot rule out such a contingency and, therefore, it would be appropriate to impose such conditions as would be necessary for ensuring that the undertrial on his own or those allegedly associated with him do not take undue advantage of the situation, which would ultimately adversely affect the trial.”

“We are of the opinion that this court, as a Constitutional Court, cannot be a mute spectator to the undertrial being sent to prison and then to Government Hospitals where his health deteriorates further, to be ultimately shifted to the Private Superspeciality Hospitals, upon intervention of courts and such movements of the undertrial continue back and forth only because his bail application has been turned down on merits under Section 43D(5) of the UAPA.”

Rao has to report fortnightly to the nearest police station of Mumbai Police through a WhatsApp call. He will also have to inform the HC immediately about his place of residence, contact number, and numbers of relatives residing with him.

On February 1, the HC closed all arguments in the case and reserved its verdict on Rao’s medical bail plea and his wife Hemlatha’s writ petition that alleged a breach of his fundamental rights due to inadequate medical care and his continued incarceration.

The bench had concluded hearings on the plea, along with Rao’s appeal against the special National Investigation Agency (NIA) court that had refused him interim bail on medical grounds. The plea said the prison authorities had not been providing Rao appropriate medical attention since 2018.

Rao’s counsels had said that he was suffering from “inherent ailments” prior to his arrest. They added that after his application was rejected by the special court, he had approached the HC, as he was found to have contracted Covid-19 in July, 2020.

The case pertains to alleged inflammatory speeches made at the Elgar Parishad conclave held in Pune on December 31, 2017, which, the police claimed, triggered violence the next day near the Koregaon-Bhima war memorial located on the outskirts of the western Maharashtra city.