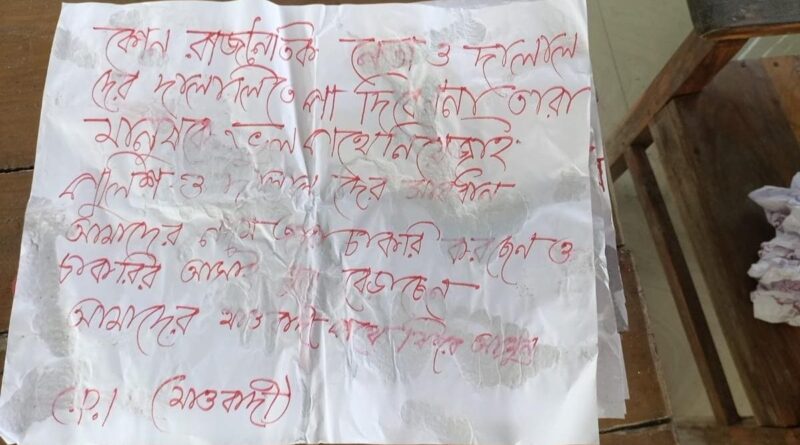 Purulia District, February 23, 2021: Several handwritten posters bearing the name of the Communist Party of India (Maoist) have surfaced in West Bengal’s Purulia district, putting the administration on alert. The posters were found on Monday morning in Ajodhya hills, Kotshila and Balrampur.

In its handwritten leaflets written in red ink on white paper, the CPI (Maoist) listed a series of demands.

Hitting at both the Centre and State government, the CPI (Maoist) posters demanded that the government reduce the prices of petrol and diesel. Messages on the posters also included the demand for the rollback of three controversial farm bills.

Demands for adequate rationing and putting a halt to the caste-related violence as well as police atrocities were cited in the posters.

Biswajit Mahato, Purulia district SP said, “we have seized the posters and are investigating the matter in every way.”

All 9 assembly seats in Purulia are dominated by the BJP and the upcoming assembly elections in West Bengal will determine how much of a strong force the BJP remains in this region. Except for Ghatal, BJP dominated the majority of the Junglemahal belt in the 2019 Lok Sabha elections.