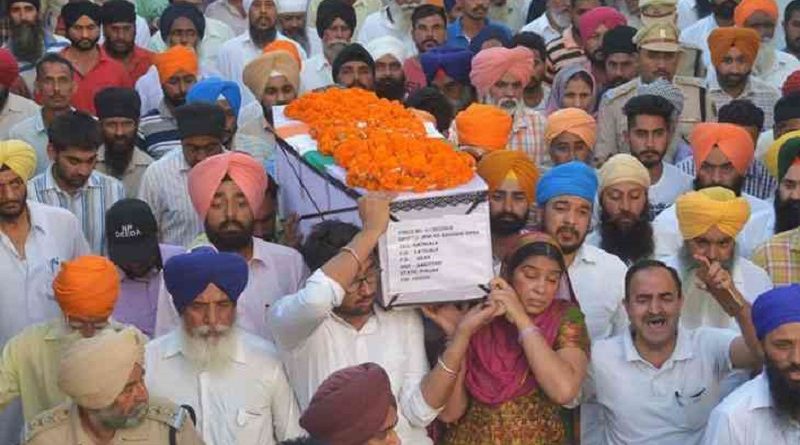 Anyone who is even mildly critical of the policies of the present government has surely felt the emotional weight of the sacrifice of a soldier in almost any context under the sun, barring one – the living conditions of the soldiers and their rights as employees of the government.

Often stretched to the most ridiculous level, this has been the authoritative response of those in power, and has proven quite effective in stonewalling the possibility of any nuanced public debate.

It’s shrillest and most belligerent manifestations are found in moments such as after the recent Maoist ambush on the Central Reserve Police Force (CRPF) in Sukma, south Chhattisgarh.

Just hours after the attack, those on the right side of power deployed the soldier’s sacrifice against their favourite punching bags – ‘the JNU Azaadi brigade, the heart-bleeding liberals, the human rights walas’!

“But what about the human rights of soldiers?” a TV news anchor asked with a scowl, without really seeking the answer.

The question, though, is too serious to be ignored. And if the answers are sought beyond the merely symptomatic – those ‘answers’ haven’t ended the violence, have they? – one cannot but hold the government responsible for the terrible deaths of the jawans as much as for their tough working lives.

And it is not just tough…

Just a week before the Sukma ambush, Tej Bahadur Yadav was summarily dismissed from the BSF. His “crime” was highlighting the abysmal and humiliating conditions in which most jawans work.

This did not stir the conscience of those who otherwise keep harping on about soldiers. The PM or the home minister did not tweet or give any statement. One wonders what to make of our regime’s concern for dead soldiers when they do not treat them as human beings worthy of dignity when they are alive.

ONLY THE DEAD MATTER?

Tej Bahadur had touched just the tip of the iceberg. Let us dig a bit deeper.

Every year, in the Adivasi heartland, far more CRPF jawans die of diseases – mainly malaria and heart attack – than in ambushes by Maoists. According to a 2015 MHA report (quoted by the Times of India in a news report dated 1 March 2015), 162 CRPF jawans died between 2012 and March 2015 because of these diseases, while 109 were killed in Maoist ambushes.

Ever wondered why only the news about the second is flashed, while the first is simply excised from public discourse?

The reasons are not difficult to guess. These are not simply natural deaths. They are caused by the lack of basic health facilities as well as the difficulty a sick soldier encounters in seeking medical leave.

Going by the Times of India report, it takes two days for an overworked jawan to be evacuated from the camp after he falls seriously ill. Often it is too late. But there is also a bigger picture here.

Why does a seriously ailing soldier need to go through the two-day-long procedure to be evacuated from his camp?

This only shows there are hardly any health facilities in the Adivasi hinterland. Chhattisgarh accounts for the second highest number of deaths due to malaria in our country, next only to Odisha.

As per one community-based survey in the state, more than 2,400 people died of malaria in 2012-13 alone. These were only the reported deaths. Most deaths are unrecorded as they happen inside homes.

Seventy years of independence has not translated into even basic health centres in these remote forested areas. For the Adivasis, unlike the soldiers, even the option of being evacuated to a hospital in a nearby town does not exist.

When Binayak Sen talked about the pathetic state of public health in Chhattisgarh and tried to address it, he ended up with a sedition charge, a Maoist tag and a few years in jail.

In Adivasi country, development – that grand word – does not mean addressing these basic issues. Instead, it has become synonymous with just two things – mining by private corporations and road-building by the state. Most of the funds allocated under the ‘Integrated Action Plan to curb Left Wing Extremism’ are used for building highways in the region.

How are the metalled highways going to help the Adivasis, who own no vehicles? Or are they the additional infrastructure mining companies need to transport the minerals? Or are these roads necessary to facilitate the movements of the security forces?

The tragedy of the Adivasi people has been compounded by what lies beneath their feet. A corporate boardroom deal in mining wreaks havoc in their lives. It entails their forcible displacement from the place where they have been living for centuries.

At times the government covertly supports vigilante groups and, on other occasions, sends in the paramilitary to facilitate that. On most occasions, it does both.

National Human Rights Commission (NHRC) and CBI reports have confirmed what democratic rights activists have highlighted for long – burning of Adivasi homes, rape of Adivasi women and fake encounters by security forces during these operations. The Maoists too have targeted the security forces. They say their violence is in retaliation to State violence, a form of resistance against concerted efforts to wipe them out.

The bodies piling up on either side, then, are symptomatic of a civil war that the government’s economic policies have brewed in the region.

It is not just the lives of the jawans that the media blacks out, even other perspectives from within the defence establishment are hardly given any space. These days, one sees a lot of retired defence personnel on prime-time television debates demanding the escalation of military hostilities.

But, one would hardly listen to former Director General of the BSF, EN Rammohan, who said that it is not Maoism, but poverty, inequality and loot of resources which is the biggest threat to internal security and it is the latter spawning the former.

The present shrill outrage on TV is not concerned with human lives on either side. It is fuelled by that instinct called greed. Anchors in TV studios too want their share of the spoils from of this war – where the poor are pitted against the poor.

No wonder it does nothing to secure anyone’s life, least of all of the soldiers in whose name further escalation of State violence is sought to be immediately justified.

If one wants the killings to stop, one needs to demand an end to this war, scrapping of the mining deals with the corporations and restoration of Adivasi rights over their lands and forests as per Fifth Schedule of the Indian Constitution.