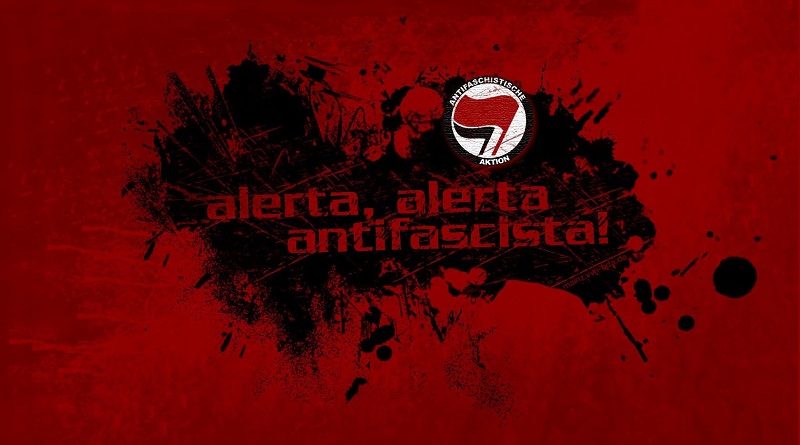 Three days since May 1st and antifascists in Austin have managed to expose one fascist a day, here is a rundown of their names addresses and other information. 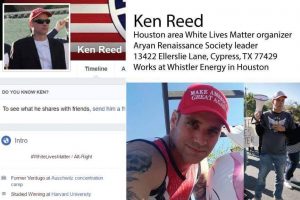 As mentioned in our last statement the lead agitator of the far right was Alt-right and neo-Nazi Ken Reed. We remember Ken from November 19th 2016 when he was run out of town by the people of Austin when he tried to organize a “white lives matter” protest at the state capitol. Ken came back to Austin on May first to physically attack comrades in the May Day rally. Ken is a prolific Neo Nazi in the Houston area not only does he rep “white lives matter” but he is also the leader of the Aryan Renaissance Society as well as a foaming Trump fan boy. Ken should be considered dangerous and be treated as a real threat to society at large. We hope that by providing this information on Ken that others can make sure he never gets a moments peace and never gets to be seen as anything but the Nazi that he is. 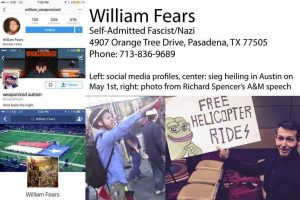 Next on our list of fascist scum is a runt by the name of William Fears who also drove in from the Houston area to join in with the other trash in attacking Austin’s only May Day march. William publicly proclaimed that he is a Nazi and a fascist; he also was witnessed assaulting multiple people as well as preforming Nazi salutes. These scum should never be allowed to walk the streets of Austin or anywhere else for that matter. William drives a greyish silver Jeep patriot which tends to be parked on the street outside of his residence. William has a criminal record and should be considered armed with an AR15, so do not be seen. William was also present at the Richard spencer confrontation at Texas A&M. Fascists in Texas are such fan boys that they will drive hours to attend an action, in doing so William has earned the special ire of many state wide antifascists. 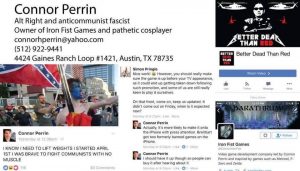 Third on our list is far, far funnier than the first two. The William Wallace cosplayer who looked a lot more like Where’s Waldo meets a can of blue paint is a local Austin Resident and video game designer named Connor Perrin. As if blue Halloween paint wasn’t silly enough he completed the outfit with a kilt, broad sword and chest paint. This guy would be a funny joke if we did not take fascism so seriously. His chest painting depicted an image of a “helicopter ride” and image popular among the alt-right which is in reference to illegal executions carried out under Latin American fascist dictators, where innocent people were tossed out of helicopters alive. While video shows Connor talking about how he does not “hate” people specifically for their race, he went on to state that he envisions an all-white America. Embracing this goal means nothing short of promoting genocide. We encourage everyone to be on guard.

Fourth is a man by the name of Kristian Noe Torres who was one of the armed far right who was charged on May first for unlawful possession of a fire arm after he pointed his riffle on attendees of the May Day demonstration. Many on the far right will use gun owners’ rights and the second amendment as a platform to spread anti-people sentiment and win over recruits. Any responsible gun owner knows that someone carelessly pointing an assault rifle at a crowd of people is not someone who is responsible or smart enough to operate a weapon. The far right tends to paint us as terrorists however our armed units maintained strict discipline and professionalism in service of the people unlike Kristian. It takes a lot for the fascist sympathizers of the Austin Police Department to actually arrest anyone from the far right but Krisitian just couldn’t even get that right. More information such as organizational affiliations and home address will be provided later. 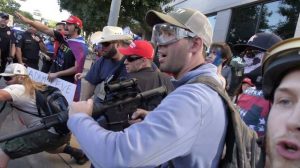 (Ken Reedis in the red cap center photo. Kristian Torres is aiming/about to aim at the crowd, behind him is Connor Perrin and in the right bottom corner is William Fears.

There is a saying “the only good fascist is a dead one” however even dead there is no such thing as a good fascist the world is just better off without them in it. A world without fascists is one we fight for. Please make good use of this information, spread it far and wide and make sure these scum never know peace, defend yourselves at all costs.

Our Antifascist comrades will continue finding out information regarding those who confronted Austin’s May Day event, these people will be exposed one after the other and eventually they will feel the mighty wrath of the people.

No platform No Pasaran!

Solidarity with Antifa the world over and every partisan who fights