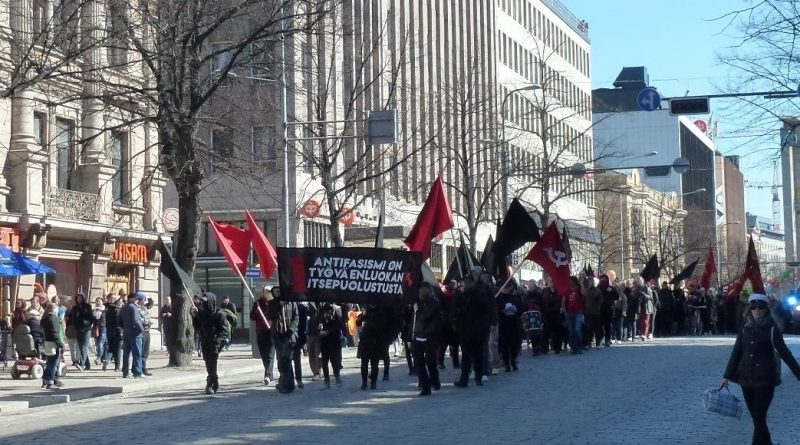 (On the picture: ”anti-fascism is self-defense of the working class”)

Anti-capitalist May Day in Tampere 2017

On 1st of May we participated in the international day of the working class in three stages in Tampere. In the morning we visited the Kalevankangas cemetery, where there is a red mass grave and the grave of the anti-fascists Lahtinen and Johteinen. There a comrade held a speech on our behalf, which can be read below. Then we participated in the anti-capitalist May Day bloc which was organized behind the march of the Finnish central organization of trade unions SAK. The main slogan of the bloc was ”anti-fascism is self-defense of the working class”, and over hundred people took part in it. We continued with the bloc to the May Day event of Pispala, where flowers were laid on a red guard monument and a speech was held on behalf of the bloc. This was the largest anti-capitalist May Day mobilization in Tampere in decades. This experience convinces us of the possibilities of a permanent anti-capitalist May Day tradition to take root and develop.

Dear Comrades! We have gathered here in Kalevankangas at the grave of two martyrs of anti-fascist resistance, comrades Lahtinen and Johteinen. Reasons for this are weightier than before. These two represent the continuation of revolutionary struggle that started in the 1918 Class War, which has later been traitorously abandoned. The workers’ revolution and class war of Finland was justified self-defense of the working class and a part of the world proletarian revolution. The then victorious white guardist counter-revolution was a precursor of fascism. Fascism is always present in the conditions of decaying capitalism, as we have been made to notice.

The communist movement developed since the first wave of the world proletarian revolution until our days has created a method to lead the class struggle until communism. This method is the mass line. It finds out, starting from the most oppressed, the most burning problems among also the unorganized working class, to organize the working class masses to solve these problems in revolutionary class struggle. It advances the militancy of the class and proletarian internationalism against passivity, reformism and fascism, at the same time exposing and designating reformists and fascists as targets. With the help of the mass line the workers recognize fascists as their class enemies and reformists as their conformers.

Let’s dare to struggle and dare to win! Now let’s hurry under the red flag to the anti-capitalist May Day bloc to encourage our friends on the international day of the proletariat!

Invitation declaration of the anti-capitalist May Day bloc:

JOIN THE ANTI-CAPITALIST MAY 1st BLOC IN TAMPERE!

We are fed up with all the sorrow that our capitalist society continuously amass in front of us. The government continues the work of its predecessors by insatiably cutting on the basic necessities of life from those living under the greatest misery. Bosses boss around wage laborers and those without a wage, while bureaucrats demand the unemployed to bow down double over. The health of those condemned as surplus is sacrificed if they can’t be profited from. The city of Tampere does its best to stuff big capital into even the smallest space remaining free from profiteering, and no room is left for working class youth to have independent activities free of cost. The century old Finnish bourgeois state deports refugees into mortal danger, while inciting workers towards nationalism so that they would turn their backs to their class.

This is not enough to keep us on our knees. We understand thus embodied fascism as a multiform threat, and we aren’t fooled by the lies about” two extremes” fed by the media and police. The bourgeoisie looks from above as the fascists unleashed by them seek for opportunities to assault us and to take root in our neighbourhoods. Fascism is the propping up of the thoroughly rotten pillars of our society, such as exploitation, racism and sexism. Fascism complements the state built on this pillars by appealing to the white man’s privileges and by recruiting our neighbours to do its dirty work. It’s the merging together, reinforcing and cementing of all oppression and reaction. Fascism is regression back to the decrepit family models and narrow gender roles. It’s the most dreadful weapon against the working class, whose disunity threatens all the oppressed. However, the oppressed masses, whose numbers and misery swell within the working class, are invincible when united.

New perspectives are shining trough dark prospects. Our hatred towards this capitalist social system and the removal of the oppression, persecution and misery it targets us with, are the starting point of our unity. We can help each other and those sharing our misery only if we defend against those attacking our friends and our pursuits towards liberation. That’s why we group into anti-fascist struggle.

Also this year our rulers, who have declared the May Day as the” day of Finnish labor” and made it into a general holiday, hope that we would spend the day under their leadership or in bed. They don’t want us to join the labor movement that is demonstrating and measuring its strength all around the world of urban decay. We do our part to make this hope crumble by bringing international solidarity and militancy into the May Day. Anti-fascism is self-defense of the working class of Tampere and the whole world.

We encourage all the downtrodden to get up join our bloc on May 1st at the rear-end of the march assembling at 11 AM at the intersection of Hämeenkatu and Tuomiokirkonkatu. As the march turns towards the Jugend square to listen the empty speeches of politicians, we will instead continue together past the junk markets towards the May Day event in Pispala. There we will spend an anti-capitalist May 1st with comradely company without bourgeoisie, police or fascists, while taking care of each other and keeping away class collaboration, racism and sexism. We welcome you to make our diverse crowd bigger by participating in the May Day march with us! We will march without nationalist or party symbols.

The anti-capitalist May 1st coalition, 2017